The inventor of this efficient generator asserts that because of its extreme efficiency and simple design, it could reduce the costs of operating some renewable systems.

DELTONA, Fla., March 17, 2017 /PRNewswire/ -- An inexpensive lightweight generator may change your world. Proof: A tiny 2½" prototype demonstrated its muscle on YouTube by turning on a 140-watt inverter to power a 120-volt AC lightbulb. Made from plastic, the new generator gets rid of the expensive and heavy laminates seen in current generators. 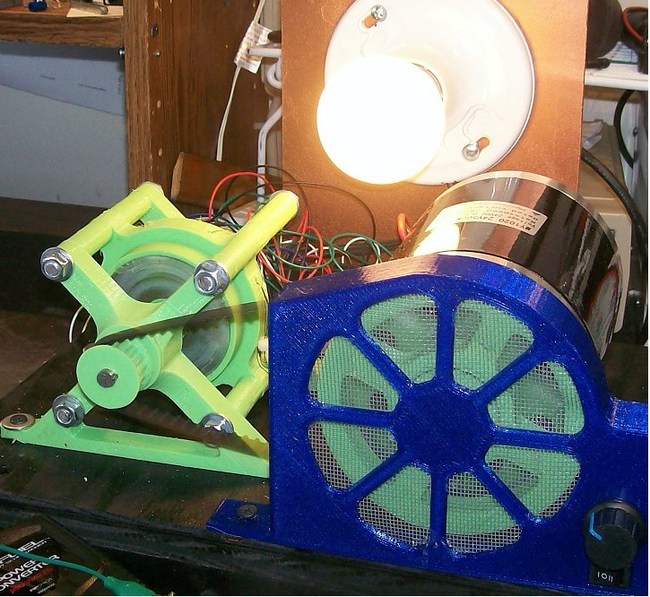 Simple to build and cheap to manufacture, these powerhouse generators could soon be everywhere. The inventor, Joe Shepard, CEO of Franklin-Thomas Company (www.ftcinnovations.com), created the generator to solve many problems. Shepard, recently awarded a full U.S. patent for his 18-phase split rotor generator, wanted a better solution.

His current generators have an independently proven efficiency above 92%. However, Shepard said they are complex and costly to build. Like the reason for many inventions, it all came about because he had to solve a dilemma.

While Shepard was designing a large drone, the weight of the battery became a problem. The battery limited range and payload.  On the other hand, a lightweight generator and a small engine could replace the battery – and all the issues/dangers connected with lithium ion. He had to create a simple generator – and he believes he did.

The resulting generator has zero cogging. It has only two wear components – a pair of simple bearings. The epoxy-coated magnets have an expected lifetime of 2,400 years. Finally, the composite structure is impervious to rust. Moreover, it is scalable from tiny to enormous. All this means Shepard's generator could add to or replace a myriad of current and future products.

Replacing main batteries in Electric Vehicles with this generator and a small natural gas engine would keep all the advantages. Alternatively, putting this combination in the electric vehicle would extend the range.

Just replacing the current alternator in gas/diesel vehicles would increase mileage because the engine would have to work less turning the normal alternator.

Another form of transportation on the horizon is large, people carrying drones. A self-flying drone is already ferrying people around town in the Middle East. The problem there is the limited 30-minute flight time with a long recharge period. If Shepard's generator/natural gas engine is an option, we could replace the main battery.

The generator might also revitalize the wind/water turbine industry. The cost of small wind turbines would drop dramatically and they would possibly show up everywhere. If a functional wind turbine was available for less than $75, many people may be tempted to buy one. A low cost wind/water turbine would change the power profile of many third world countries – especially those without any electricity.

Shepard has already installed his generator in his roll-around luggage to make it intelligent and keep his iPhone charged. The generator extends the range of his e-bike. A smaller version even acts as a handheld wind turbine to power an iPad. The kicker: The technology that created this new generator makes FTCs large generators supposedly even more efficient.