90 percent of electricity service interruptions occur on the distribution system, the poles and wires that deliver electricity to our homes and businesses.

In the time since U.S. Department of Energy (DOE) Secretary Rick Perry first asked whether coal and nuclear power plants deserved special treatment, “resilience” has been the talk of the energy world. Most of the discussion has centered on the high-voltage electric grid. But a new report by three prominent energy experts correctly says that the focus should instead be on electricity customer needs. Those customer needs lie primarily on the distribution system—not the high-power grid. In fact, according to DOE, 90 percent of electricity service interruptions occur on the distribution system, the poles and wires that deliver electricity to our homes and businesses.

What does “resilience” mean?

For the power grid, “resilience” typically means the grid’s ability to withstand and recover from extreme weather and other threats. For the Federal Energy Regulatory Commission (FERC), which regulates the interstate high-power grid, resilience is core to ensuring system reliability.

Lately, however, coal and nuclear plant owners, eager to justify profit guarantees for their financially struggling resources, have wrapped themselves in the resilience flag. They claim that only plants with a so-called “secure” fuel supply, like those that have coal piles and nuclear fuel rods onsite, are “resilient” against threats to the grid. So naturally they believe that fuel supply equals resilience. 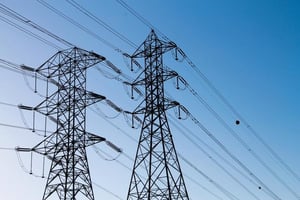 In reality, fuel supply accounts for just  0.00007 percent of total grid disruptions. And large portions of the grid already do quite well with little to no nuclear and coal power, like Texas, California, and the Northeast.

That’s just one of the reasons why FERC rejected DOE’s proposed rule that would have greenlighted profit guarantees for coal and nuclear plants.

Although FERC properly rejected DOE’s requested bailout, it asked grid operators and the public for more input on what constitutes a resilient grid. FERC’s questions focus only on one part of the grid: the bulk power system (BPS), which includes the power plants, transmission lines, substations, transformers, and associated control equipment spanning our country.

While FERC’s narrow focus on the BPS is understandable, since that’s what FERC regulates, energy experts Alison Silverstein, Rob Gramlich, and Michael Goggin argue that this focus is misplaced.

Their report, entitled A Customer-focused Framework for Electric System Resilience, and commissioned by NRDC and the Environmental Defense Fund, explains that the better approach is to focus on customer experiences: ”We do not build electric generation or transmission for their own sakes. Every element of the end-to-end power system—generation, fuel transportation systems, transmission, distribution, distributed generation and storage, end use devices and energy efficiency measures—exists to provide energy services for end-use customers.” Also, customers “pay the ultimate price for power outages, whether through their electric bills or their own personal losses and expenditures.”

Silverstein is an economist who has worked as an energy advisor at FERC and DOE. She also managed the writing of the technical portions of DOE’s August 2017 study on reliability and resilience. Gramlich and Goggin are with Grid Strategies and are former staffers of the American Wind Energy Association. Gramlich also was an economist at FERC and at PJM—the nation’s largest grid operator.

In other words, they know their stuff.

They explain that because the costs of any resilience efforts are passed on to the customer, these efforts must be evidence-based to ensure that customers don’t end up paying more for the same service.

It’s mostly about the distribution system

The evidence doesn’t support a narrow focus on the BPS. Instead, most customer outages result from issues with the distribution system.

The distribution system includes more than 6 million miles of wires and poles that carry power from power plants and the BPS to our homes and businesses. The distribution system falls outside of FERC’s jurisdiction. States, rural electric cooperatives, and others regulate this widely decentralized collection of many smaller systems and virtually all customers connect to the grid at the distribution level.

The report explains that customers are far more likely to suffer power outages from downed local lines on the distribution system than from damage to the large transmission lines and towers on the BPS.

This makes sense, in part because the distribution system isn’t designed like the BPS. Much of the BPS looks like a spider web of interconnecting lines. If storms down a large transmission line on the BPS, grid engineers can reroute the electricity to a nearby line.

In contrast, distribution-level lines, especially at the neighborhood level, look like the hub and spokes of a bicycle wheel, with each spoke representing a single power line running down a neighborhood street. Knock out a line and there’s no way to deliver replacement power to customers on the line. Worse, knock out a substation (the hub), and no one connected to any of the spokes receives power.

Given this evidence, what should FERC avoid?

Because the distribution system is responsible for most outages, Silverstein and her colleagues argue that any new resilience measures should strengthen and reduce customer dependence on the distribution system. Examples include rooftop solar and other customer-owned distributed energy resources (DERs), more regional coordination, and better emergency preparedness.

FERC also should avoid creating unnecessary new “resilience” requirements for the BPS. Grid operators and FERC already account for resilience in their everyday reliability-driven mission. While many of these efforts are undertaken in the name of reliability as opposed to resilience, the work also ensures resilience because “[p]ower system reliability and resilience are closely interrelated.”

The report also urges FERC and other policymakers to avoid discriminating in favor of specific resources, especially in ways that could upend existing markets. Perry’s 2017 grid pricing proposal would have done exactly that: pay more money to coal and nuclear plants for no reason other than political favoritism. More recently, FirstEnergy Solutions asked DOEfor an (illegal) emergency order to subsidize its failing coal and nuclear power plants in Ohio and Pennsylvania.

The report reminds FERC and others that, to ensure economically efficient power markets that deliver reliability and resilience, all “services should be defined in functional, technology-neutral terms based on actual system needs, rather than in terms of the characteristics or attributes of resources that historically provided those services.”

What should FERC do?

While many of the most-effective resilience measures fall outside of FERC’s jurisdiction, some do not. For example, FERC can act to fully integrate DERs connected to the distribution system. These types of policies would be a value-add to the work already being done at the regional level, without creating a solution in search of a problem.

As Silverstein and her colleagues warn, “There is a great risk that if regulators and stakeholders do not conduct the type of analyses suggested here, we will end up committing significant amounts of money and effort to improve resilience, yet have little constructive impact on the probabilities or actual levels of future customer outages.”

We hope that FERC and DOE are listening.

This article was republished with the permission of the NRDC and was originally published here.