Human beings compete to build tall buildings - from the pyramids of the ancient world to the skyscrapers of our modern world. Tall structures from the ancient world were meant for either royalty or for the gods, but the modern skyscraper has lesser mortals working and living in them.

It is well documented that the Otis elevator, along with steel columns and beams, freed up the engineers to go skywards from the 19th century onwards. Ever since then, there has been a competition to build vertically in the modern world.

That seems enormous, until you lower your eyes and look down at the busily scurrying creatures known as termites--The scourge of wood buildings in some parts of the world. But they are avid builders. 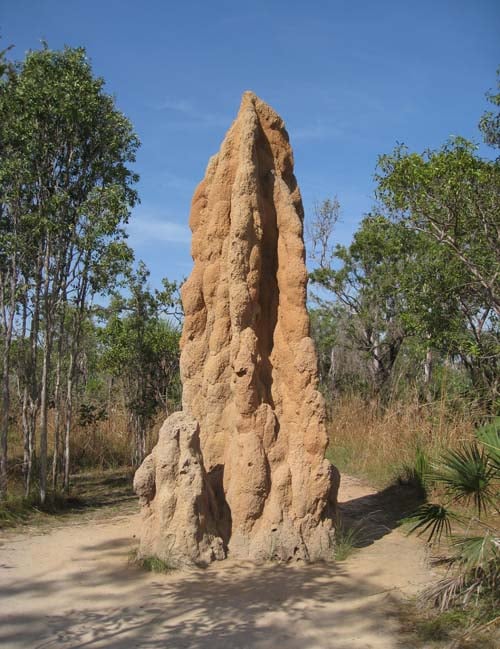 In the Democratic Republic of Congo, the tallest recorded termitarium was 42’ tall, and the average sized termite is 6mm long. Not a very high structure you must be thinking. Wait! Do the math. The termitarium, home to the termites, is 2,133 times taller than a termite standing on two legs.

Presumably, the people who work on building a skyscraper have gone through rigorous training, civil engineering textbooks and design tools. How, then, was the termite trained? One can only wonder about this.

A termites’ home is called a termitarium. They are generally conical with rising spires. A caste system among the termites has clear job allocation. The King and Queen are involved in reproduction. The soldiers protect and the workers labor to maintain and extend the home and colony.

Termitaria are construction sites with a vast number of worker termites, mostly blind. They continuously dig downwards to get damp soil to maintain levels of humidity inside. Nests are built to minimize exposure to the Sun’s heat and benefit from natural wind flows. An intricate network of passages and wall vents help in circulating and cooling the air.

To avoid sunlight, termites come out in the night for food and build covered paths to get from place to place in the open. Woody matter is an all time favourite: dead trees, grass, coconut-husk, and wooden homes or even furniture. This might make them a pest, but they are fantastic clearing agents and recyclers in nature. In Earth’s history the credit for clearing fallen trees over billions of years generally goes to the all-work-no-play termites.

Let’s list a few similarities between termitaria and skyscrapers:

The construction of a skyscraper is noisy, while that of the termitarium is quiet.

Millions of creatures have survived the vagaries of nature by sheltering themselves in the best possible way, all in a sustainable fashion, except the dominant species today (us).

New US homes are 1000 sq. ft. larger than they were in 1973, and living space has doubled per person. This expansive lifestyle has taken its toll on the planet, as we demand huge amounts of materials and energy to heat and cool these large homes.

Of all the Construction & Demolition(C&D) debris generated, 90% is from demolition, while the rest is from construction.

Consider the small and misunderstood termites. By comparision, our buildings are expensive, high maintenance, and they don’t even last forever. We frequently get unhappy enough to break them down and start the process of extraction and refining again.

Termites build tall well-ventilated structures into which snakes actually move in, to escape the heat! As temperatures rise, such learning is invaluable. Wasps have waterproof nests, beavers build dams which are visible from a satellite, weaver birds build beautiful cozy nests and thereare so many creatures which have survived for millennia without making a mess of their surroundings. There is much to learn.

In Brazil, there is an area as large as Britain with termites mounds spaced averagely 60 ft. apart. Scientists have discovered that in this currently inhabited ancient termites city, bigger than any city ever built by humans, there are some mounds almost as old as the 4000 year old pyramids.

Janine Benyus says, “Trees and bones are constantly reforming themselves along lines of stress. This algorithm has been put into a software program that's now being used to make bridges lightweight, to make building beams lightweight.”

Nature has much to teach.

About the Author: Sophia is an online ESL/EFL instructor, a passionate educator who blogs about education on her personal blog. She found her true calling — teaching — while she was juggling writing and a 9-5 desk job. When Sophia is not busy earning a living, she volunteers as a social worker. Her active online presence demonstrates her strong belief in the power of networking.