By the time Gretchen Rowe decided she wanted a green home, she had all the details worked out. This made building it easier—yet highly challenging, according to designer Jason Offutt of The Shelter Studio in Bend, Ore.

Rowe and her husband, Rodney Toogood, had selected a lot along the Deschutes River as the site of their new home, and had a specific set of parameters in mind for anyone who built the structure. 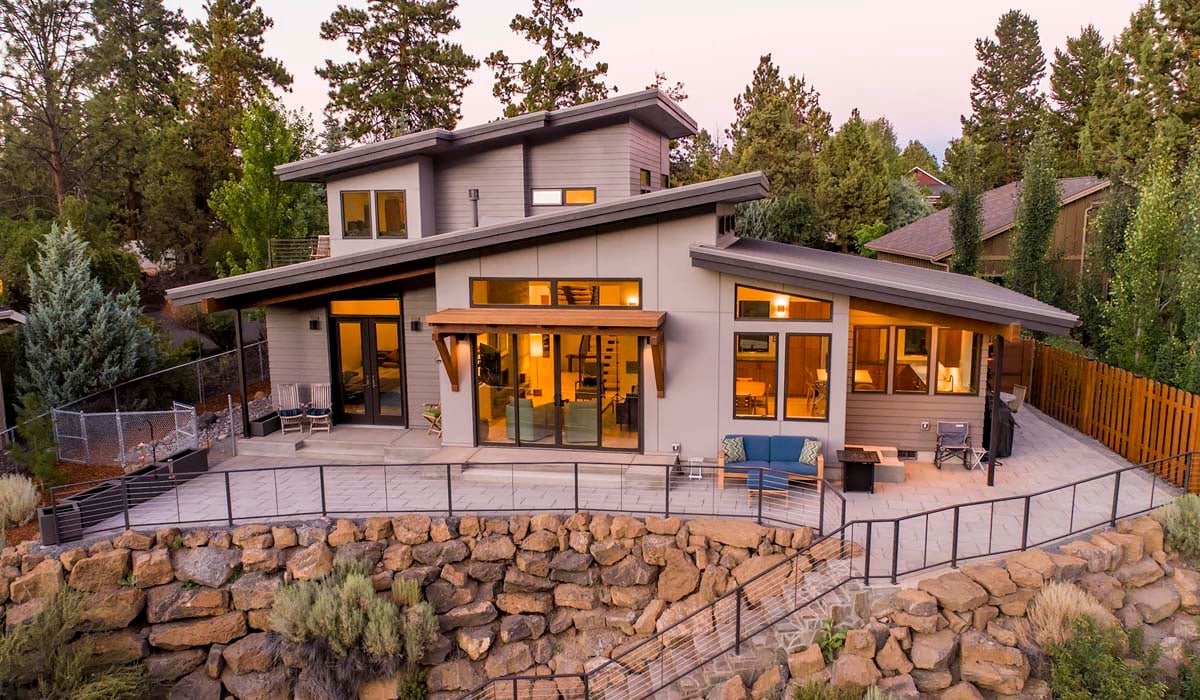 “We were in the market for a waterfront,” Rowe says. “The lot was something we walked by for six months before we asked the neighbors, who were doing a major remodel, if they would ever be interested in splitting the lot.”

As it turned out, the property owners were considering expanding their garage, and splitting the lot would make that possible. That put the parcel in Rowe and Toogood’s price range.

Because of its elevation—and Rowe’s desire to be as green as possible—any home that went on the location would need to make best use of the sun. “They approached us to develop a modern designed home to work with the site, the views and street access,” Offutt says. “[And meet] the goal of net-zero home design.”

Bend’s higher latitude would make that difficult, Offutt notes. “In our climate and latitude, the sun is encouraged into structures during the day and typically diminished in the afternoon, to not overheat homes in the summer, unless there is a view to the west,” he says.

So, the home was designed to where the long axis of the home was exposed to the sun from early morning thru midday, and also late afternoon, while also not limiting the views to the river on the structure’s west side. “The river actually runs through the backyard,” Offutt says. “Keeping the view intact was a big deal.”

Other parts of the home also were designed with this goal in mind. The upper-level spaces—including an exercise room and master bedroom—are oriented to the north, to not overheat during the day, while retaining their views of the river.

The sun was contained in other ways. At the main level, the kitchen, dining and living area are oriented to obtain passive solar gain during the day. Sun shades were added to help block the sun externally for western windows, without blocking the river view. Even the stair core is located to obtain passive solar gain throughout the day, using the sun to illuminate the stairs and halls.

One of Rowe’s other “must haves” was energy efficiency. “We wanted to make it as environmentally friendly as possible,” she says. “We wanted to have an energy-efficient house that used as few resources as possible, produced as little waste as possible, used sustainable, renewable materials, and still stayed within our budget.”

“We had a few weeks of delay in the building process that allowed me to go over every seam of the structure and add sealant where needed, look for any gaps, and stuff insulation in around window and door frames,” Rowe says. She jokingly adds that she “obsessed over it for a bit while waiting for subcontractors.”

There are high insulation ratings everywhere: R-38 behind the tub and shower, R-39 for exterior walls and subfloor, R-25 batts in rim joists, R-58 in vaulted ceilings, R-50 in attic spaces, R-21 in exterior walls of the garage, R-30 in the garage ceiling, and R-9.4 at the headers of the exterior doors and windows.

The exterior walls feature staggered studs at 10 inches thick to offer the best R-value, according to Offutt. On the metal roof, LG Solar LG 305 NeON panels provide necessary full power to the house, when the sun is shining.

The final result is a home that met Rowe and Toogood’s energy goals—the Energy Trust of Oregon gave the house an Energy Performance Score of 8 out of 10, noting that is complements adjacent homes and the overall neighborhood, according to Offutt.

“Throughout the summer, their power bills have only been about nine dollars a month,” Offutt says. “During the winter the power bills have been less than predicted—which was under $100 monthly, and that’s when one of the ductless heat pumps didn’t work. [Now] we expect an even more-favorable reading.”

A Way with Wood

Rowe and Toogood also desired exterior materials that complement the northwest material palette, and were as low-maintenance as possible. James Hardie fiber cement products were used for siding, and northwest Douglas fir elements were brought in as accents, with a deep staining and sealant to preserve from sun exposure.

In addition, the home’s ceiling consists of “rediscovered” redwood—wood passed over as scrap when the area was first logged, later reclaimed and rescued from the forest floor. “I’m a believer in conserving resources,” Rowe notes.

Rowe, who stepped in as the general contractor when he stepped back due to personal matters, came away with a new perspective on home construction. “I had to really watch the details during the building process,” she says. “Being that I have never been a foreman on a building site before, I had to ‘pick my battles’ and was not able to get everything done the way I had chosen after much research, but it was mostly just little things that were challenging...[such as] a drafty exhaust fan in the laundry room, more outlets in the garage and an outlet or two in the master closet. [But if] those are the only things that come up—not bad!”

Offutt can agree. “One of the things I love about my job is the ability to draw something up, and a year later I’m walking through it, all of it real,” he says. “That, and seeing how happy people are with what I’ve done.”