America's utility bills are the highest cost of maintaining a home, higher than either property taxes or insurance. Adopting a more efficient energy code in Utah would make sense.

ON THE VERY DAY IT WAS REPORTED that January’s U.S. electricity prices had hit an all-time record high, Utah’s House of Representatives voted to severely cripple energy codes that would put thousands of dollars in energy savings in the wallets of Utah homebuyers.

At an average of over $2,000 a year, America’s utility bills are the highest cost of maintaining a home, higher than either property taxes or insurance. And in Utah, where homeowners have endured two recent rate hikes and where cold winters or hot summers are particularly costly for inefficient homes, reducing energy costs would mean real relief.

Adopting the most current building energy code would reduce energy bills by nearly 40 percent, saving between $7,052 and $15,543 over a typical 30-year mortgage after quickly recouping the cost of the efficiency improvements. That’s real money that will either be paid to a utility or kept at home to help manage tight family budgets, meet car payments or boost college funds. 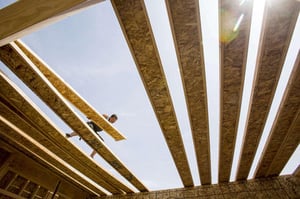 Why? Because powerful special-interest opposition to better residential energy codes from the Home Builders Association of Utah is fierce and— judging by the Legislature —extremely effective in thwarting efforts to extend those benefits to new home construction.

America is exceptional because we have the world’s most productive, creative and innovative private sector. Our manufacturers continually develop and improve products and practices thatboost home quality and put thousands of dollars in energy savings in the wallets of homeowners. The legislation that passed the House recently limits energy code updates to every six years, which will hurt Utah’s new homebuyers by delaying the introduction of long-lasting improvements that save energy. Regardless of when Utah updates its codes, local officials from across America will continue to update the nation’s model energy codes every three years. Because these updates incorporate new readily available technologies and practices, they ensure that new American homes and commercial buildings meet minimum levels of efficiency.

In contrast, delaying code updates to every six years will put the Beehive State severely behind other states, waste energy and make homes more expensive to maintain.

While builders argue that they oppose more efficient homes to prevent higher home prices, a National Association of Homebuilders poll found that nine out of 10 Americans will pay 2 to 3 percent more for a home with permanent energy efficiency features. They know that efficiency is an investment that pays quick and substantial dividends that start on the day they move in.

While I understand that builders don’t want to be told to build more efficient homes, America still imports too much energy from unstable sources. And because our factories, cars, fuels and other businesses have improved their efficiency, homes and commercial buildings are now America’s largest energy user, consuming 71 percent of our electricity and 54 percent of our natural gas. The Legislature should put its constituents ahead of builder special interests by rejecting HB285 and letting the Utah Building Code Commission get to work on adopting the latest model energy code for its citizens. At the end of this legislative session, HB285 was amended, which left no time for the bill to actually be passed—GB

Bill Fay leads the Energy Efficient Codes and Coalition. A native Idahoan, he worked for two Idaho senators and two Idaho represenatives in Congress, the Idaho Republiscan Party and the accounting firm of Haskins and Sells.