THE INTERNATIONAL CODE COUNCIL (ICC) continues to develop the International Energy Conservation Code (IECC) on a three-year cycle which has culminated in the latest version, the 2015 IECC. However, not every state is inclined to follow the same cycle when it comes to adoption of the IECC. Reasons for non-adoption vary, from perceived cost implications to lack of enforcement resources to complexity of changes. We will take on this last item, complexity of changes, in a multipart study. This first part, presented here, includes a general analysis of Sections R401 through R402 of the 2009, 2012, and 2015 IECC. 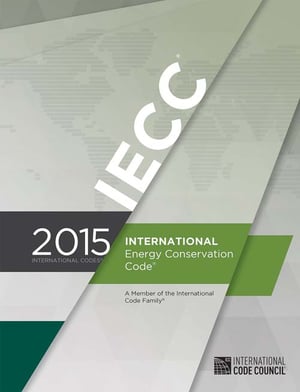 This is a very general overview of the differences between the IECC 2009, 2012 and 2015 Residential Energy Efficiency Sections R401 through R402. Section R401 focuses on the scope of the regulations (residential buildings), compliance paths and requirements of the displayed certificate. Section R402 focuses on fenestration and insulation requirements. For further clarification, please consult the following links:

Section R401.2 (2009 and 2012) are essentially the same with regard to compliance paths. 2015 adds the energy rating index (ERI) as a third option for compliance that will be found under a brand-new section for 2015: Section R406. Section R401.2.1 is an entirely new section introduced for 2015 as a prescriptive path of compliance for homes built in tropical zones.

R402.1 (2009 and 2012) have essentially the same text pertaining to the sections for thermal envelope compliance; however, 2015 allows for the separation of low-energy buildings.

Table 402.1.1 “Insulation and Fenestration Requirements by Component” appears in all versions, except that in 2015 it is now labeled Table R402.1.2. The R-value and U-factor requirements have changed between versions, but are not being analyzed as a part of this study.

Section R402.2 is just a heading in 2009, but in 2012 and 2015 this section addresses specific sections for insulation requirements.

For 2015, Section R402.2.7 is new text that addresses continuous insulation and exterior walls.

Section R402.3 is just a heading in 2009, but in 2012 and 2015 new text has been added to list specific fenestration requirements and sections of the code.

The following sections are the same across the board unless noted otherwise:

Section R402.3.5 (Thermally isolated sunroom U-factor): All three versions address sunrooms, but with subtle differences across the board.

Section R402.4.4 in the 2015 is an old 2012 section number that is being used as an entirely new mandatory compliance strategy. The new Section R402.4.4 in the 2015 addresses open combustion fuel-burning appliances. Some have called this an atmospheric room or a combustion closet; ether way, it appears as if this section was specifically written to address atmospherically-vented combustion appliances. The exception to this rule includes direct-vent appliances with both their intake and exhaust installed directly to the outside, as well as fireplaces and stoves that comply with Section R402.4.2 and Section R1006 of the International Residential Code.

Under the American Recovery and Reinvestment Act of 2009, the U.S. Department of Energy agreed to provide funds to states that adopted the 2009 International Energy Conservation Code (IECC) or an equivalent for residential construction, contingent upon at least 90 percent compliance by 2017. So far, we continue to see a mixed bag of IECC adoption across the country. Vermont and Maryland have already adopted the 2015. Ten states have adopted the 2012 and 24 states are still using the 2009. Finally, there are 14 states that are either using an IECC older than 2009 or that do not have a statewide energy code.

We will continue to provide our analysis of the IECC 2009, 2012, and 2015 in future installments of CodeWatch.

2009 IECC Requirements of Most Immediate Concern to Manufacturers http://bit.ly/1LDeImn