The DOE says that about 15 percent of household energy use goes to heating water. 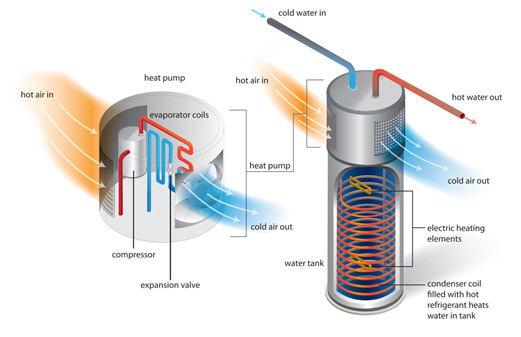 DOE estimates that the newly implemented standards will save residential consumers $8.4 billion over the next 30 years. Total energy savings through 2045, DOE says, are an “estimated 2.6 quads, about as much energy as used by 15 million households annually.” The standards were finalized in 2010, but DOE held off on implementation in order to give manufacturers time to retool to manufacture the more efficient water heaters.

For example, the Energy-Star qualified Whirlpool model HPSE2K50HD045V (shown below, right) may qualify for local and utility company rebates. Whirlpool says it operates for one-third of the annual operating costs of a typical electric water heater ($192 vs $585) and features a vacation mode that saves money when consumers are away. It also features an Internet of Things (IoT) SmartPort for communications connectivity to future utility SmartGrid and home management applications. 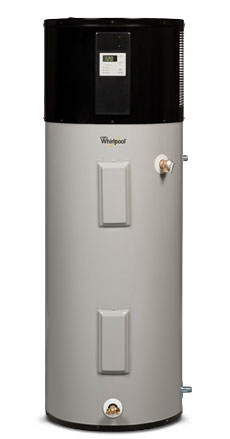 However,“grid-enabled water heaters,” defined as large electric resistance water heaters that can be used as low-cost thermal batteries, are exempted from the recently enacted standards. The National Resources Defense Council (NRDC) supported the exemption which the DOE opposed. Grid-enabled water heaters have communication and control technology that allow consumers to change their hot water heating consumption based on pricing incentives, such as time of day. The larger tanks can store heated water longer and are best for use with wind and solar energy production.

Other companies, such as Bosch (rated the overall most sustainable brand in this year's Reader's Choice survey) offer their own high performance models that should easily meet and exceed the new standards, including the Compress 3000 Air-to-Water Heat Pump. This pump operates down to -7 degrees.