Missouri launches a statewide Energy Plan; Pennsylvania and Illinois make moves toward adoption of the 2015 IECC. 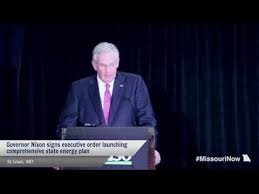 The Missouri Governor issued an Executive Order “to formally launch the development of a comprehensive State Energy Plan.” The process will be spearheaded by the Missouri Department of Economic Development’s Division of Energy. Input was collected at seven public meetings across the state. Participants included many energy stakeholders, including consumers, businesses, public utilities, renewable energy companies, academic researchers and environmental advocates.

“The over-arching goals of this initiative are those we all share: making sure Missouri consumers and businesses have access to clean, reliable, affordable and abundant energy, while seizing the opportunity to attract high-paying energy jobs to our state,” Governor Nixon said. Six technical working groups will be established to focus on six topics identified in the Governor’s Order. A steering committee has already been formed. Among the members are representatives from AIA, NRDC, a Kansas City-based trades council and the Sierra Club.

Click here to visit the state’s webpage devoted to the plan.

Observation(s):
It will be interesting to see the recommendations produced by this initiative. On one hand, shortly after his election in 2009, Governor Nixon called for a 2 percent annual reduction in energy use by state agencies. Through 2013, they had more than doubled the requirement, cutting consumption by “more than 22 percent.” The Governor should get credit for that goal and his state’s success in exceeding it. On the other hand, Missouri is a home rule state, so it will be challenging to implement statewide efficiency goals through a statewide energy code mechanism. An incentive structure could potentially spur code updates in those jurisdictions that haven’t already stepped up.

Energy Code Information:
In late September of 2014, SB 1023 went to the House for first consideration and was laid on the table. The legislation, which would revamp the state’s Review and Advisory Council (RAC), had already passed the Senate in early summer. The bill was waiting for the House Committee’s vote, but in early October the bill was “removed from the table.”

If passed, the bill would enable a more regular code adoption process starting with the 2015
I-codes. It would also give the RAC greater ability to review and adopt code provisions that have previously been rejected.

The combination of an unusually arduous update process and the absence of a “strong voice for adoption” resulted in the state ignoring the 2012 IECC. However, the process has begun on the 2015 IECC. The call has been made for public input on the state’s next iteration of energy codes. It has been hinted that a lack of turnout might result in a repeat of the RAC’s 2011 inaction.

Three public hearings, between November 2014 and February 2015, were scheduled to solicit public comments. The RAC’s decision will be made by May 29, 2015, and becomes Pennsylvania law, as the Commonwealth is obligated to adopt whatever the RAC adopts, without changes. And this is not an easy task: there are 1,793 changes that the RAC must review and decide to either adopt or reject.

Observation(s):
We got the sense that the removal of SB 1023 from the table indicated the House did not want to entertain any changes to the RAC process. That’s disheartening, because the last time the state contemplated an energy code update, the RAC decided to do nothing. It also went beyond the decision to do nothing—the amount of testimony was severely restricted, procedures were changed mid-meeting, information was ignored and unsubstantiated statements were both made and given credence by RAC members. It is our hope that this time, a more professional process was executed.

Energy Code Information:
Due to legislative requirements, the state is beginning the update cycle for the Illinois Energy Conservation Code from the 2012 IECC to the 2015 IECC. (The 2012 IECC, with very minor amendments, has been in effect since January 1, 2013.) The Illinois Energy Conservation Advisory Council (ILECAC) reviews and votes on all proposed amendments to the Code.

Observation(s):
The minor amendments to the 2012 IECC included a weakening of the ACH/50 requirement and an implementation delay of six months. If the timeline on this code update stays consistent with the last, one should expect to see an effective date of January 1, 2016. The one wild card in this scenario is a change in the Governor’s office, but it is too soon to tell if that will have any effect.