FIBER CEMENT SIDING has become a popular alternative to vinyl.  That's no surprise.  Fiber cement looks like wood, holds paint, and won't rot.  Termites don't eat it, and it doesn't burn.  You can even cut it with a circular saw and fasten it with regular nails.

Though not recyclable, fiber cement has a longer projected service life than vinyl, and its manufacturing process causes less enviornmental harm.  (The manufacturing of vinyl siding produces dioxin.)

Many customes will pay extra for these benefits - as much as $1,000 extra for a typical home, 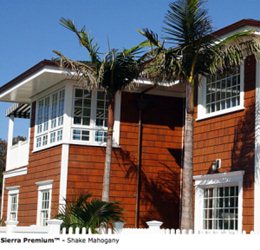 according to a study by the National Association of Homebuilders Research Center.  This is backed up by field experience. "I usually present customers with three or four siding choices," notes Redden Grammer, a builder in Moorhead City, NC. "many are willing to pay the extra for fiber because it will last longer."

Of course, getting these benefits requires that you install it right, and installers list the following handful of things that someone using this product for the first time should be made aware of.

It's very heavy.  Fiber cement siding weighs about three times more than cedar.  "A 12' length probably weighs 40 pounds," says Jeff Kent of EFC Construction Management in Pawtucket, R.I. "If you don't have a forklift, you have to move it around one piece at a time." That great weight also makes it a bad idea to put too many pieces on a scaffold at one time.  The safest bet is to have someone on the ground cutting pieces and passing them up as needed.

The dust is nasty. When cut, fiber cement releases silica dust, which can lead to respiratory problems if inhaled.  that makes it crucial to wear a respirator.  You should use a blade made for dust reduction, such as Hitachi's Hardiblade or Dewalty's PCD Fiber Cement Blade. Snapper shears or a buillotine type cutter can be used for crosscuts, but they aren't suitable for ripping planks.

It swells when wet. To keep swelled boards from buckling, the installer should leave a small expansion gap where boards butt into trim pieces or into one another, and detail that gap so that it looks good and sheds water.

There are different ways to do this. Grammer caulks all joints with polyurethane caulk, while Gary Bererson of Synergy Companies Construction in Lancaster, Massachusetts uses 5/4" thich trim boards, and rabbets the edges of the trim so that the clapboard tucks under it.

If the product gets wet before it's installed, it will be more likely to break when being handled.  That makes it important to keep it covered until it's ready to be used.

It's more brittle than wood. Even with dry boards, the surface is easily damaged by nail heads or staples, according to Ket. He recommends roofing nails, whose large diameter heads won't break the surface.

It reacts with aluminum. Kent has found that fiber cement is corrosive to aluminum flashing.  To prevent corrosion, he makes sure that there is always a layer of 15-lb. felt between flashing and the back of the siding.

Heed these caveats and your buyers should have a siding job that they can enjoy for years to come.