Investing in History with Geothermal 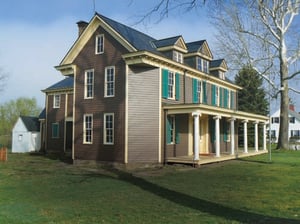 THE COCKAYNE FARMSTEAD is an historic home and preservation project located near the banks of the Ohio River in West Virginia. Once a thriving sheep ranch belonging to the prominent and successful Cockayne family, the dwelling was named to the National Historic Registry in 2002.

When the house came into the custody of the Marshall County Historical Society, it was a living museum, stocked with over 1,500 artifacts dating back to 1850. But without a central heating or cooling system, they were in jeopardy.

Under the direction of Program Director Tom Tarowsky, the farmstead’s exterior has been restored, including the replacement of the slate roof and rehabilitation of the front porch. A new geothermal heating and cooling system, featuring a Bosch heat pump unit, dehumidifier and sophisticated control system, moderates the indoor environment, protecting the artifacts and making it comfortable for visitors. Set to reopen this spring, the Cockayne Farmstead is well on its way to becoming the educational and cultural center Tarowsky and the rest of the project’s enthusiasts envision. 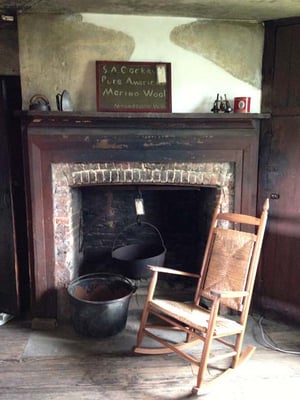 Until the geothermal system was installed, the Cockayne Farmstead had no central heating or cooling and no hot water. Samuel A. Cockayne, a World War II veteran and the last remaining heir to the Cockayne family’s farm, became a recluse after his father died in 1955. Over time, he confined his living quarters to just two rooms of the 11-room farmhouse. The farm’s acreage was sold off, and the town of Glen Dale sprang up around the home site.

“These were very primitive conditions,” says Tarowsky. Every room had an open fireplace, but Samuel used the gas oven to heat the home on bitter cold days. Though the dwelling had been electrified in 1895—one if the first in the area—the wiring had never been updated.

When Samuel died in 2001, the house and its footprint went to the City of Glen Dale, which then leased the property to the Marshall County Historical Society. (The Historical Society later raised funds to acquire the land that now makes up the complex.) The main house was in dire need of restoration. The plaster was crumbling, and dust and soot covered the furniture. Conservators found six to nine layers of wallpaper covering some of the walls, dating back to the 1850s.

Many of the nearly 2,000 items found throughout, including furniture, glass, ceramics, clothing, art, letters and other documents, had remained untouched for decades.

“The artifacts were in surprisingly good shape,” says Tarowksy. “They had been acclimated for so many years.” 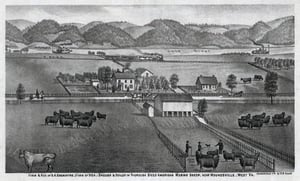 Once called Glen Dale Farm, the Cockayne Farmstead was originally part of a 300-acre Merino wool operation. The new geothermal field is located between the main house (center) and the smaller tenant house.

In 2012, a Collection Assessment Program launched. The first task was to tag, clean and remove everything from the house. Samuel had saved all paperwork, which proved an invaluable resource for dating artifacts.

With the artifacts stored safely in trailers on the property, a team of volunteers, interns and students began carefully scrubbing the walls, woodwork and floors in each room, which hadn’t been cleaned for decades. But before restoration of the interior could begin in earnest, the Cockayne Farmstead needed a modern climate control system.

Tarowsky began working with Steve Advakov, architect with Heritage Architectural Associates, and several consultants: Laurie Booth, a conservator from Cleveland, Chris Haddox, LEED AP and Rick Kershner, Director of Preservation and Conservation at the Shelburne Museum in Vermont. Tarowsky and the project’s Governing Committee wanted to find the most energy-efficient system available, but there were other factors, too.

“I learned a lot about the importance of humidity control,” he says. “As we thought about HVAC systems, we realized geothermal would provide the most long-term benefits.”

Advakov and the project’s engineer sized the six-ton system, which needed to perform in a large wood-framed house that was largely uninsulated. Understandably, the state historic preservation office didn’t want insulation blown in through holes drilled in the historic clapboard siding.

To minimize impact on the site, the system consists of four vertical wells that are 320 feet deep. Dillan Well Drilling performed the drilling in February of 2013. “The drilling posed interesting problems,” says Tarowsky. The field is located 400 yards from the Ohio River and was once a riverbed, itself. Dillan encountered a thick layer of gravel before hitting bedrock, and so cased the first 93 feet to prevent clogging of the loops.

Rumer-Loudin installed a Bosch six-ton, two-stage model TA071 on the second floor of the farmstead. The TA series is no longer manufactured, but the energy-efficient unit is comparable to Bosch’s Greensource CDi SM Series model, says Craig Lazinsky, marketing program manager for the company. 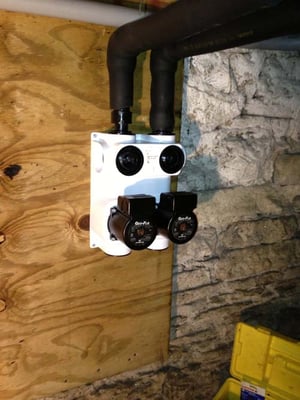 Manufactured under the name Geo-Flo, the Bosch Flo-Link flow center regulates the volume of geothermal fluid circulating through the system.

A high-pressure Bosch Flo-Link pump center was installed in the basement, to regulate the volume, pressure and flow of liquid circulating through the system. Next came the new ductwork in the attic.

“We had to be careful not to destroy any parts of the house, and we didn’t want any exposed ductwork,” says Loudin. He came up with a unique solution to distribute conditioned air, running flexible stainless steel ducting through several of the fireplace chimneys. The chases end just before coming into view.

The Bosch unit works with a Vapac humidifier to assure the interior environment doesn’t become too dry.

Quantum Controls Group, a Pennsylvania-based company that designs, installs and services integrated HVAC control systems for commercial projects, designed a system for the Cockayne Farmstead that ensures humidity and temperature levels stay within the narrow ranges required to protect the artifacts.

“The heat pump is mounted on the second floor, and it would have been difficult to run cabling,” says John Hredzak, owner of Quantum Controls Group. Instead, six wireless sensors—three upstairs, three downstairs—send data to the main controller once every minute. If the average temperature changes more than three degrees in either direction, heating or cooling begins. Similarly, if the relative humidity goes above 55 percent or below 45 percent, humidifying or dehumidifying is prompted. The main controller is made by Tridium, the sensors by Honeywell.

The heating and cooling system, along with the sophisticated controls, should help protect the many one-of-a-kind objects for years to come. These include one of Tarowsky’s favorite pieces: a factory-made chair from the 1890s, upholstered with an oilcloth-like material. The arms are embellished with carvings of dogs’ heads.

“The piece reflects the age, and the taste of the family,” says Tarowsky.

Once the ductwork was in place, the house was rewired and the attic insulated with fiberglass batts donated by Lowe’s. In addition, UV- and light-filtering storm windows were installed over the original windows. The windows protect sensitive artifacts, and, as Tarowsky notes, they also reduce draftiness. Now that Centennial Restoration has completed the plaster renovation, many of the items are back in the house and on display. The Cockayne Farmstead will be open for tours later this spring.