Canadian and American homebuilders target low HERS scores in RESNET’s Cross Border Challenge. Just how low they can go?

The competition helps promote the utilization of the Home Energy Rating System (HERS) Index, a nationally-recognized system for inspecting and calculating a home’s energy performance.

This February, the seven builder awards were presented at the RESNET annual conference in San Diego, CA. Builders submitted projects for consideration. Five of the awards were based on having the lowest HERS score for their specific category, and two were special President’s awards based on a fleet of HERS new home ratings. Only production builders who rate 50 or more homes a year are eligible for President’s awards.

American production builder KB Home captured the 2015 RESNET President’s Award for the second year in a row, while the 2015 CRESNET President’s Award went to Brookfield Residential. KB Home is one of the largest production builders in the U.S., with a presence in forty markets from coast to coast. The firm provides a HERS score for all of its new homes and has broken ground with its Double ZeroHouse projects, which demonstrate both net-zero energy and net-zero water.

Brookfield Residential is the fifth-largest land developer and homebuilder in North America, with markets in the Canadian provinces of Ontario and Alberta and several U.S. states. Like KB Home, Brookfield Residential provides a HERS rating for every new home it builds. The firm has also built several ultra-green demonstration homes, including its latest, the PureBlue Home, completed in Fairfax, VA this March. The home, which earned a -1.0 HERS rating with its solar PV array, also demonstrates a graywater system and rainwater collection.

Rod Buchalter, chair the RESNET Cross Border Home Builder Challenge, says the primary goal of the challenge is to support more homes being HERS rated. This year, just under 20 entries were received.

The Residential Energy Services Network, a nonprofit that aims to help homeowners lower their utility bills by making their homes more energy efficient, created the HERS index to give homeowners and buyers a standard to measure a home’s performance. There are more than 1 million HERS-rated homes in the U.S. CRESNET was given the exclusive right in Canada to use and adapt all the standards of RESNET. 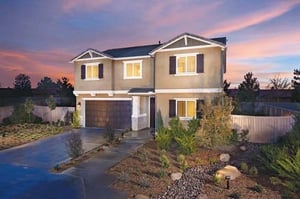 When a RESNET-certified HERS Rater performs an energy audit on a home, the home is compared to a reference designer-model home of the same size and shape. The score is based on variables including exterior walls, vents and ductwork, HVAC systems and the water heating system.

Buchalter says a home’s performance is typically the third most important factor, behind price and location, when a homebuyer is shopping.

Getting an Edge with ICFs

Greenhill Contracting received the award for the American Custom Builder with the lowest HERS score.

“I was amazed I received the award,” says Anthony Aebi, president and founder of Greenhill Contracting, which specializes in net-zero energy homes. “With all of these people you hear talking about green building, I would have thought somebody would have been doing something better. I was amazed to find out that I was able to exceed what everybody else was doing in the industry.”

Integral Building & Design, Inc. provided HERS rating and LEED rating services and commissioning for various systems of the home, which was built in New Paltz, NY. Aebi says he reached the HERS score of 26 using insulated concrete forms.

“Concrete does not let air go through,” he says. “The insulation I have is continuous on the inside and outside.”

He also uses a combination of open- and closed-cell foam that is sprayed to the roof from the wall assembly all the way up to the roof deck.

Aebi believes it’s very important to support the HERS score itself.

“It gives a way for people to clearly establish the rating on a structure to see how well it can perform,” he says.

The submission deadline for the 2016 Cross Border Challenge is January 18, 2016. Each submission must include builder info, HERS Report (including HERS score) and an image of the front of the house. For more information, or to submit to the Challenge, email Rod Buchalter: rod@renewability.com

Robert Dykins, owner of Connecticut-based Glastonbury Housesmith LLC, received the Net Zero American Builder Award. Dykins says he built two custom homes during 2014. The home he submitted for the challenge received a HERS score of -23.

To achieve the score, Dykins used the most up-to-date building practices for insulation and air-sealing that addressed air infiltration from the foundation to the roof. These include a centrally insulated foundation, FOAMGLAS insulation under the slab, zip wall tape, spray foam and 2-pound Icynene foam, as well as blown-in fiberglass wall cavity insulation.

In addition, he used the most efficient heating and cooling and appliances from the Energy Star appliance list, along with LED lighting.

“A big part of it was the way the ducts were designed, the [WaterFurnace Series 7] geothermal heat pump and the fact that the house is so tight in air leakage,” Dykins says, referring to the home’s score. “On some of the coldest, windiest days in winter, you could leave a door open and standing three feet back from the door, you couldn’t feel a draft.”

Without photovoltaics, the house had a HERS score of 29. When the 14-kilowatt solar panels were put on the home, it took the score to -23.

In order to build a home with such an emphasis on energy efficiency, Dykins says a builder has to have a customer who “wants to go there.” He had such customers in Carl Benker and Elizabeth Wegner, who designed their home after two years of independent research on high performance buildings.

In a news release issued by Energize Connecticut, Carl Benker, an engineer, stated: “It was important to us to build a home that was both durable and energy-efficient. By doing so, we will not only save money in the long run, but also achieve a lower overall environmental impact. We followed the most current building science construction principles, and the house will use no fossil fuels anywhere. The builder, Glastonbury Housesmith, made the house a huge success in our eyes.”

"This award makes us fine-tune the practices and procedures that make a house more efficient,” he says. “[Builders] wouldn’t be trying new things, or putting homes together differently if there weren’t awards like this.”

Dykins says that he is constantly changing and adapting everything he builds.

“The whole industry really needs to do a turnaround,” he says. “Builders need to add a few more steps along the way to make homes more energy efficient.”

Having the mindset of only building one way—the cheapest way—is wrong, Dykins adds. Materials are constantly changing and improving and it’s the builders’ responsibility to educate themselves.

“By not educating yourself, you’re leaving a lot off the table that you could offer someone,” he says. “It doesn’t help us move forward. It isn’t just the fossil fuels that you are saving, it’s building a house where you won’t need to replace things in 10 years.”

The details for the 2016 Cross Border Challenge have just been finalized. To qualify, homes must have received their HERS ratings by a third-party certifier between January 16, 2015 and January 15, 2016. The submission deadline is January 18, 2016, so there is still plenty of time to see how low you can go. All awards will be presented at next year’s 2016 RESNET conference in Arizona. Please see Sidebar for categories and more details.