THE AMOUNT OF CARBON ENERGY "embodied" in buildings has been a hot topic in the green building universe for at least 20 years. And rightly so. Only by understanding the REAL environmental costs of materials and products can we adjust and reduce to optimal levels.

But a recent survey points out what we've all suspected. No one is measuring embodied energy the same way.  In fact, researchers sometimes are not even talking about the same attributes of a building. The anticipated lifespan of the building can also skew the results. Check out this chart: 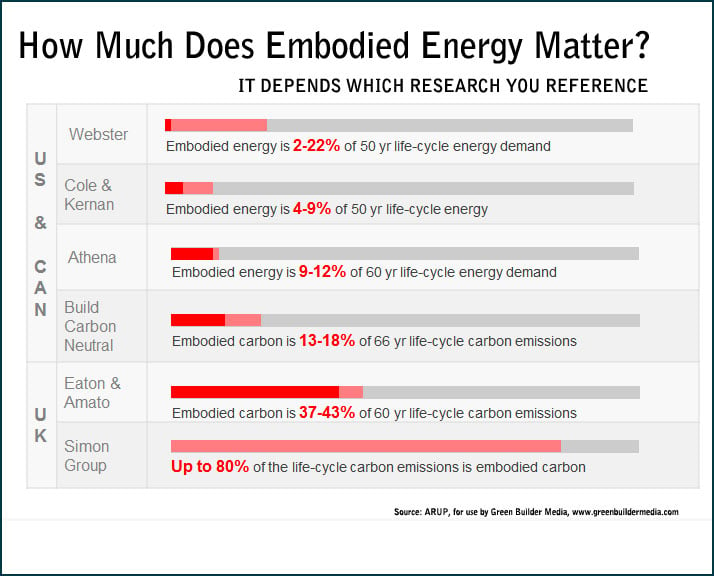 Here's what the authors of the chart had to say.

"In performing a Literature Review, we have found a few studies containing some breakdowns of embodied and operational carbon, more often embodied versus operational energy. As summary of the ones most often cited and done in the US, Canada, or UK, is shown here.

Without getting too caught up in the details, there are a couple themes to draw from here. One is that there is variability in the numbers both across studies and within them. Sometimes it is due to region, but mostly it is due to methodology. ...his created an interest amongst us to see where new trends in limiting carbon emissions will take us, which is what prompted the series of case studies Engin will now describe.

Mark Webster estimates GWP of 2-22% attributable to embodied, based on 3 different building types, over 50 year life, in the US and in Montreal. The lower value represents a wood-framed building in the US and the higher represents a concrete-framed high efficiency building in Montreal. [“Relevance of Structural Engineers to Sustainable Design of Buildings”, Structural Engineering International, March 2004.]

* Probably the most Cole and Kernan studied office buildings found that about 4-9% of 60 yr life-cycle energy demand is embodied energy [in USGBC presentation, Feb 2007.]

* In the UK, Eaton and Amato found a much larger percentage of the total carbon emissions attributable to what the materials embodied.

* Smith and Fieldson of Simon Group (UK) estimate up to 80% [as published in “Whole Life Carbon Footprinting”, The Structural Engineer, March 2008.]''

Clearly, a set of universal standards defining embodied energy needs to be established, so that both professionals and consumers can make better informed choices. GB
Share This