Air Barriers and Insulation: What's the Biggest Energy Saving Bang for Your Buck?

Citing a case study of a fluid-applied air barrier, the author argues that air barriers may be underrated in terms of their energy saving impact.

But codes requiring air barriers are starting to be adopted on a state by state basis, although they are not currently required in most states. With recent changes in energy codes, continuous insulation is now required for frame construction in at least six out of eight U.S. climate zones—while there are continuous air barrier requirements in five out of eight climate zones. But does this make sense from a building science perspective. Let's look at the energy conservation benefits of continuous air barrier systems, relative to the benefits of increased insulation. 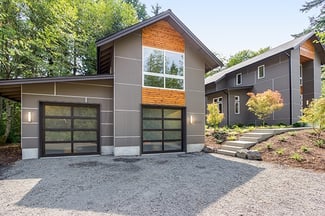 The specification of air barrier materials for exterior building enclosures is becoming increasingly common. The U.S. Army Corp of Engineers now requires that all new buildings, and all renovated buildings incorporate an exterior air barrier with maximum allowable air leakage of 0.25 CFM @ 1.57 psf.

A prototype medium three-story office building was modeled for Dallas, Seattle, and Toronto climates. Various scenarios for retrofit of existing buildings and for design upgrades for new construction were considered. The baseline case buildings were modeled as meeting the minimum requirements of ASHRAE 90.1-2004 for existing buildings and ASHRAE 90.1-2007 for new buildings. A baseline air leakage rate of 1.55 cfm/sf of above grade envelope surface normalized to 1.57 psf (75 Pa) was used.1

The baseline existing building was as follows:

In short, adding a continuous air barrier appears to significantly reduce air leakage in both new and existing buildings, even in those were rigid insulation is installed. While it's not clear how much of the difference results from inaccurate installation of the insulation, that may be simply an academic point--assuming this installation was fairly typical, whereas the real-world results make the strongest case for addition of air barriers.