Science programs have been showing us carbon nanotubes for years. Now there are techniques that may make plants into solar collectors and/or bomb or pollution sensors.

The idea for nanobionic plants grew out of a project to create self-repairing solar cells modeled on plant cells, chloroplasts. In plants, chloroplasts are self repairing. Once removed, they become fragile and easily injured. In research funded by the Environmental Protection Agency (EPA), Massachusetts Institute of Technology (MIT) researchers studied ways to enhance the photosynthetic function of chloroplasts isolated from plants, for possible use in solar cells. The MIT research could lead not only to ways to produce living solar cells but also give plants completely new functions, such as monitoring environmental pollutants, such as nitrous oxide. 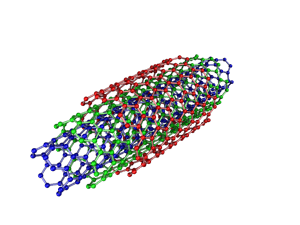 The MIT researchers developed a  process that spontaneously incorporates and assembles carbon nanotubes (CNTs) and oxygen scavenging nanoparticles into plant chloroplasts, the part of plant cells that conduct photosynthesis—converting light into energy. Adding carbon nanotubes (CNTs) to chloroplasts enhanced photosynthesis by 30 to 49 percent, depending on whether the chloroplast was part of a living plant or had been removed for study. Other research demonstrated that incorporating cerium oxide nanoparticles also knows as nanoceria into the extracted chloroplasts significantly reduced concentrations of superoxide, a compound toxic to plants. The team also observed the enhanced plants could sense nitrous oxide (see middle photo -- above shows all parts of Arabidopsis Thaliana). 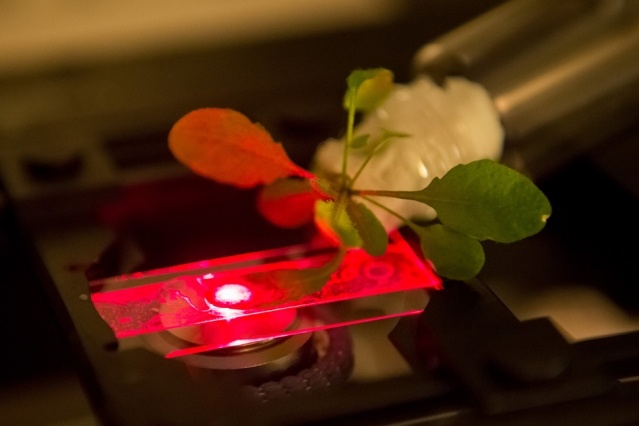 Infrared: MIT researchers used a near-infrared microscope to read photosynthesis results from carbon nanotube sensors embedded in an Arabidopsis Thaliana leaf (above). The small flowering plant, related to mustard greens and native to Eurasia is used in salads or sautéed. The chloroplasts were able to detect the pollutant, nitrous oxide.

According to the Environmental Protection Agency (EPA), in 2013 nitrous oxide (N2O) accounted for about 5 percent of all U.S. greenhouse gas emissions from human activities. Nitrous oxide is naturally present, but human activities such as agriculture, burning fossil fuels, wastewater management and industrial processes are increasing the amount of N2O in the atmosphere. Nitrous oxide molecules stay in the atmosphere for an average of 114 years. One pound of N2Os effect on warming the atmosphere is almost 300 times that of 1 pound of carbon dioxide.

“Plants are very attractive as a technology platform,” says Michael Strano, the Carbon P. Dubbs Professor of Chemical Engineering and leader of the MIT research team. “They repair themselves, they’re environmentally stable outside, they survive in harsh environments, and they provide their own power source and water distribution.”

Chloroplasts by themselves absorb light only from the visible portion of the solar spectrum. Visible light is only about half “of the incident solar energy radiation.” Less than 10 percent of full sunlight is available for normal photosynthesis, researchers say. Researchers say the “nano-bio approach” may increase the breadth of the solar spectrum available for photosynthesis. And that would help plants grow, produce power or sense other things that could be monitored.

Massachusetts Institute of Technology (MIT) researchers discovered that highly charged single-walled carbon nanotubes (CNTs) coated with DNA and chitosan (a biomolecule derived from shrimp and other crustacean shells) are able to spontaneously penetrate into chloroplasts. Researchers refer to the method as “lipid exchange envelope penetration (LEEP).”

LEEP concerns me a bit, I suppose in the same way that GMOs (genetically-modified organisms) do. The concern with GMOs is that the genes inserted from one species might have unintended consequences in another. I am allergic to tomatoes. I know others who are allergic to nuts and shellfish, Some have dietary limitations. No one is sure what the effects will be for those of us who do have food allergies, if we are unknowingly exposed to foods with have elements of our allergy triggers. Others are concerned that GMO foods may mingle with and pollute non GMO foods. Increasing photosynthesis can be a good thing, but using something that people are allergic, too, such as seafood, to create a method to get the CNTs to spontaneously enter the chloroplasts may be a bad thing.

Typically, plants make use of only about 10 percent of available sunlight. The carbon nanotubes act like artificial antennae that allow chloroplasts to capture wavelengths of light not in their normal range, such as ultraviolet, green, and near-infrared.

Some view the technology as a way to use plant chloroplasts for solar energy. The downside, which would have to be overcome to make chloroplasts for capturing solar practical, is that the chloroplasts, especially when outside their plant, easily break down due to light- and oxygen-induced damage to their photosynthetic proteins. When potent oxygen radical scavengers such as cerium oxide nanoparticles, those nanoceria we mentioned earlier, were combined with a highly charged polymer (polyacrylic acid) and incorporated into extracted chloroplasts using LEEP dramatically reduced damage.

Nanobionics will help lead to the development of biomimetic materials for light-harvesting and solar energy conversion, as well as biochemical detection with regenerative properties and enhanced efficiency, MIT says.

“Right now, almost no one is working in this emerging field, says ”the MIT paper’s lead author, postdoc and plant biologist Juan Pablo Giraldo. Giraldo envisions turning plants into self-powered, photonic devices such as detectors for explosives or chemical weapons. The researchers are also working on incorporating electronic devices into plants. “The potential is really endless,” Strano says.  Giraldo says. “It’s an opportunity for people from plant biology and the chemical engineering nanotechnology community to work together in an area that has a large potential.” Perhaps the day will soon come, when our hedges will produce solar power, and when plants alert officials to the presence or drugs, bombs or pollutants.

For more information, check out the News Office at Massachusetts Institute of Technology (MIT).