The thought may strike fear into the hearts of teachers, but it’s a trend with real potential for leveling the educational playing field.

I’ve known many teachers, and they’re among the hardest working, least recognized heroes I know. So it’s not without reservation that I pen this article. But doing some research for our futuristic Flex House project recently, I stumbled into a trend that could quickly grow into a social and cultural game changer.

The Rise of VR Education 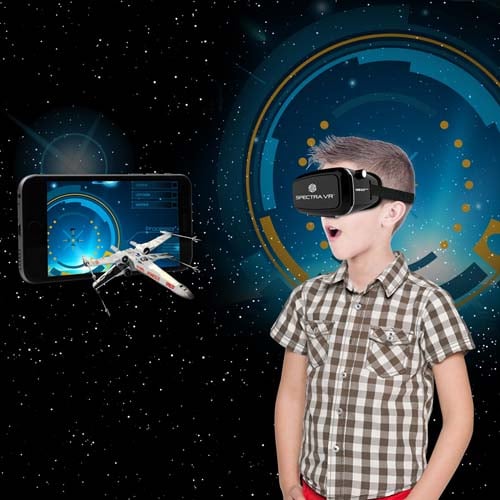 Like most technology, the potential to build or destroy lies in what we do with it. And virtual reality is especially seductive. It’s immersive, and getting more immersive, raising boggling questions about the very nature of reality. For example, if you and I are sharing a VR experience on the moon, but my body is in Boston and yours is in China, where are we? And by “we,” I mean our individual spark of consciousness. Go even further down the rabbit hole: Does it matter if the moon is the real moon or a virtual moon of some programmer’s imagination?

Let’s leave such fascinating questions aside for a moment, and strap on our “state of the VR education market” headsets.

Educational apps for VR are multiplying rapidly. Self-contained VR headsets now can be had for a shockingly low price. The Spectra headset from Hamilton Buhl, for example, retails for under $50. And so far at least, much of the software is free. Say you’re a parent leaning toward home schooling. Compare the price of a VR headset with that of textbooks and real-world field trips. There’s no contest.

There’s been a lot of talk about the potential of VR in the classroom, as a teacher’s aide. That’s certainly a viable idea. In that scenario, the teacher plays a role like that of the Magic Schoolbus driver, escorting students on an exciting first-person journeys into the human body, or Machu Pichu or Jupiter.

But let’s not overlook home schoolers. About 4 percent of U.S. kids are homeschooled. My guess is that VR will boost that number significantly. And it’s not because parents want to drive the magic schoolbus. What will drive it is AI, the availability of programs that essentially run themselves. This is not automatically a good thing. Inevitable? Probably. Key to the outcome will be the context of the apps. Will they teach compassion, acceptance of diversity, creativity and collaboration—or something more sinister?

Many people have an interest in homeschooling that they have never actualized. Deterrents are many.  Whatever the back story, home schooling requires serious time and commitment. It’s not easy being a teacher in your spare time. Reasons for considering home schooling range from religious to political to personal.  VR, particularly when coupled with AI, promises to remove some of those hurdles, playing the role of a virtual Mary Poppins at home. Are we ready an AI nanny?

There are definitely perks to VR learning. From both a socio-economic and an ecological perspective, VR education could be a force for good. For example, low-income kids that might otherwise end up in under-funded schools with sub-par teachers could still have access to private-school level resources. Imagine a kid from the inner city, able to visit Yellowstone one day, the redwoods of Oregon another. It’s a well-documented fact that compassion for wildlife and nature is essential to conservation efforts. A kid that has spent time in a rain forest—even a virtual one--is far more likely to take action to protect and preserve it.

One challenge will be keeping early VR learning out of the hands of the bad guys. It’s only a matter of time before the forces of militarism, corporatism and plain old greed begin to work their way into the educational market. Science learning, for example, could quickly fall prey to the anti-science bias that’s being normalized by the Trump administration. And unfortunately, in a wild West of competing apps, first person shooters and angry birds could quickly surpass the really civic and eco-friendly ones. The normalization of violence reflected in popular video games could easily seep into educational products.

Instead, with careful guidance and screening of material from parents, home schooled and less fortunate children could develop a passion for subjects that’s currently hard to instill. And it’s not just home schoolers that can benefit. One can imagine a VR component to every course of study, giving teachers almost limitless “resources” in terms of relating complex ideas and teaching compassion and a broader world view to our children.

If you’d like to see what a home schooling with VR setup might look like, you can visit one in person at the CES show in Las Vegas in January. Come and see us at the Flex House, and take a sneak peek at one of many possible futures.