This Odor-Free Urinal Works Without Water

ADMITTEDLY, URINALS ARE NOT an everyday topic of conversation. And when it comes to homes and apartments, they almost never enter the discussion. However, that may be changing and changing very soon.

Home urinals, ranging in popularity, have been found in parts of Asia, Europe, Australia, and even in India. However, the trend in the United States is still in its infancy. In addition, the economy, which has severely impacted the housing construction industry, has slowed things down considerably. 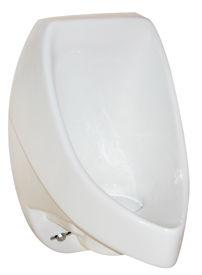 Call, and host of TV shows on HGTVPro.com, “New ‘residential’ waterless urinals are becoming a big hit with green builders and homeowners who want to save water. These waterless urinals have been redesigned to match just about any bathroom layout.”

Waterless urinals help conserve water, and by doing so, conserve energy. For instance, in the State of California, it is estimated that nearly 20% of all energy used in the state is used just to move water to and from commercial and residential settings. A conventional toilet installed in homes and commercial settings uses 1.6 gallons of water per flush (gpf). A new urinal installed in a commercial setting uses closer to one gallon of water per flush, amounting to about 40% less water.

As the name implies, these systems use no water whatsoever, which can significantly reduce water consumption. In a school or office, it is usually estimated that a waterless urinal saves 40,000 gallons of water per year. Although a comparable study for homes is not available, it is believed the savings will be significant as well due to considerably fewer toilet flushes.

Home urinals can vary in cost rather dramatically. There actually are artists that design sculpted models that look like beautiful flowers with other attractive designs, which can cost several thousand dollars. In fact, one woman reportedly paid an artist/sculptor $10,000 for a home urinal as a gift to her husband. However, more traditional home urinal systems run about $1,000. A waterless system, because there are fewer parts and plumbing needs, cost between $250 and $650.

Installation costs can also vary. If the home urinal is being installed as part of a new home, the costs are negligible. However, an existing home installation can run several thousand dollars, especially if it is a flush-type urinal. This is because of the plumbing costs to bring water to the urinal as well as a drain for waste. A waterless system still requires a drain but because it does not need to be plumbed for water, the installation charges are considerably less.

The types of home urinals discussed here, except for those made by artists and sculptors, are manufactured by some of the leading restroom fixture manufacturers around the world. This means they are readily available or in most cases can easily be attained. This applies to both water-using and waterless urinal systems.

What appears to be occurring right now in many parts of the world is that home urinals are going through an acceptance period. As they are found in more and more homes, their novelty will likely wear off and their Green practicality—water and energy conservation—will surface as their key benefit.

A frequent speaker and author on water conservation issues, Klaus Reichardt is founder and CEO of Waterless Co. Inc., Vista, Calif. He can be reached at klaus@waterless.com. Read all Ed Del Grande’s comments on home urinals