New bill gives Navajo Nation, which has experienced severe water shortages, the right to use water from sources in Utah.

IAPMO, whose nonprofit International Water, Sanitation and Hygiene (IWSH) Foundation has helped bring water and sanitation to the Navajo Nation through multiple Community Plumbing Challenges (CPC), strongly supports S. 1207, the Navajo Utah Rights Settlement Act of 2019. The Senate recently passed S. 1207, and it now heads to the House of Representatives for approval.

Introduced by Sen. Mitt Romney (R-Utah) and co-sponsored by Sens. Kyrsten Sinema (D-Ariz.), Martha McSally (R-Ariz.) and Elizabeth Warren (D-Mass.), the bill ratifies and modifies the Navajo Utah Water Rights Settlement Agreement negotiated between the Navajo Nation, the United States, and Utah. The agreement gives the Navajo Nation the right to use water from sources located within Utah and adjacent to or encompassed within the boundaries of the Navajo Reservation resulting in depletions not to exceed a specified amount annually.

“This legislation has been a very long time in the making, and I am proud that the Senate has come together to see it through the finish line,” Romney said in a press release. “The COVID-19 pandemic has disproportionately impacted the Navajo Nation in our state, and the shortage of running water in nearly half of homes is contributing to the spread. With this legislation, we will be able to provide access to water and wastewater facilities for the Navajo Nation and also provide the long-needed water infrastructure for its citizens. I urge my House colleagues to pass this without delay so we can keep the longstanding promise by the federal government to the Navajo Nation in Utah.”

In collaboration with DigDeep, IWSH has led two Community Plumbing Challenges in the Navajo Nation, in October 2018 and June 2019, to deliver clean running water and safe wastewater disposal to a number of homes. In December 2019, IWSH representatives installed a new toilet and washroom facilities for the Naatsis'áán (Navajo Mountain) Chapter House. 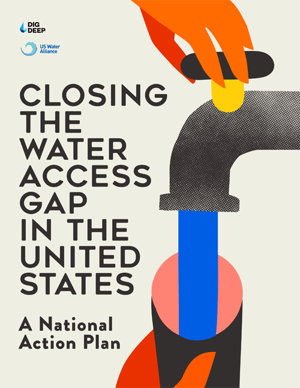 IAPMO also sat on the advisory council for a new report, produced by DigDeep and the US Water Alliance, titled “Closing the Water Access Gap in the United States: A National Action Plan,” which highlighted communities across the nation whose health and economic well-being are threatened due to insufficient access to water and sanitation. Among those was the Navajo Nation, where families drive for hours to haul barrels of water to meet their basic needs.

“Today more than 2 million Americans live without access to water and sanitation,” says Dain Hansen, IAPMO’s executive vice president for government relations. “We applaud the Senate for passing this legislation, which will help to close the water access gap for Navajo communities in need. For too long, providing access to water and sanitation to marginalized communities has fallen through the cracks.”