The first casualty of secrecy is trust.  A recent New York Times article shines the light into a dark corner of the building industry.

On one level it may be the quintessential tale of the fox guarding the henhouse or the wolf shepherding the sheep.  In this case the “flock” is comprised the home and building owners, renters, and other occupants of homes and other domiciles in the United States.  From the 30,000 foot view it just is part of a larger landscape of disasters that unfold in front of our eyes as special interests not only manipulate entire industries for their own purposes but proceed to hijack our culture, our economy, our environment, and perhaps even our democracy. 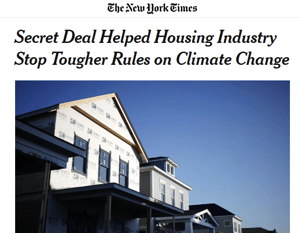 On the final Saturday of October an article in the New York Times titled “Secret Deal Helped Housing Industry Stop Tougher Rules on Climate Change”, written by Chris Flavelle, publicly exposed the existence of a closed guarded and highly questionable arrangement between the National Association of Home Builders and the International Code Council that gives the construction trade group a virtual stranglehold on the code development process in the residential building arena.

The memorandum of understanding between the two non-profit entities has long been the subject of speculation and debate in code development circles as concerned policy watchers asked why and how a trade association enjoys four seats on two of the most crucial ICC committees that wield tremendous influence on what does, and does not, make it into each new edition of the residential building and energy conservation codes.

As the Times article correctly points out, four votes on an eleven member committee may be a minority but given the voting procedures in place that block of four votes means that any proposal they oppose must gain the support of five out of six remaining votes (the chair generally votes only to break a tie) in order to secure committee recommendation to the voting members for passage and inclusion in the new edition.

Spokespeople for the Council assert that it is important to have “stakeholders” at the table and cite “evolving needs of the construction industry”.  The Association claims that its members “know what works and what doesn’t work” in the name of what it calls “affordability”.  But where does this spirit of cooperation cross the line?  And who, in this arrangement is protecting the interests of home buyers, building owners, tenants, and the public at large?

Who is ready to give the home building industry a pass and say they deserve to be self-regulating?  Are they somehow different from aircraft and automobile manufacturers, pharmaceutical giants, financial institutions, insurance companies, and countless others who have betrayed the trust of the people they are supposed to serve?

The profit motive is a powerful force whether you make a living selling houses or code books.  But since homes are responsible for close to twenty percent of all energy-related carbon dioxide emissions in the United States the performance of those buildings affects a great deal more than the bottom lines of the companies who build them or the organizations responsible for the regulatory framework under which they are constructed.  There is a lot more at risk here than the integrity and reputations of a couple of non-profit players.  The performance and future value of the places where we live, and the far-reaching effects on our economic and environmental well-being are in the hands of people we should be able to count on, something that is increasingly hard to do.