I have the privilege of participating on an architectural review board (yep, this time it is a privilege!) for a new development in Southeast Orlando called Laureate Park at Lake Nona. The 2500 home community is being developed in collaboration with GE and compliments the neighboring Lake Nona Medical City, which will include hospitals, and bio-science research centers. The premise behind the development is to create a true live-work-play community that offers all amenities and services needed for a sustainable and walkable lifestyle.

The unique part of this particular DRB is the introduction of Transitional Architecture. I worked with the Lake Nona team in developing standards that have become the guide for builders to follow. The three national builders are Ashton Woods, David Weekley Homes, and K Hovanian, each of which builds a very market driven home with familiar architectural themes.

Our goal was to take the traditional models and add some twists and turns through material, texture, color and massing opportunities. At first glance the homes will appear as “normal”, but at second look you will notice exposed concrete block columns in lieu of traditional round Doric columns, or a wire mesh railing in lieu of a traditional vertical style, corrugated metal siding in lieu of shakes, etc. The idea is to add a fresh approach that addresses a more urban fabric for single and multi-family housing without going full out contemporary or modern…the result is somewhere between traditional and modern.

At first the builders were somewhat reluctant to the variation of norm, but turns out that was due primarily to some confusion regarding what exactly we were asking them to do. We have weekly DRB meetings, stay in close communication with the builders design teams, and have had one on one meetings with their groups to walk through some specifics and clarifications. The attitudes now are of renewed excitement in creating designs, which before, were somewhat outside the comfort range. The new style has been embraced and the builders are quite happy with the results. 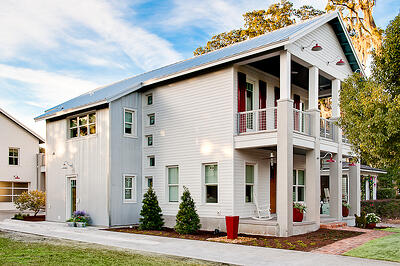 Some of the concepts can be found in the Green Builder VISION House Orlando '11, which I designed for GBM for the International Builders Show in Orlando earlier this year. We also collected examples from a variety of other homes that have used the techniques.

The series of SketchUp images below offers an example of the range of styles that can be created from one particular floor plan. The photo of the Vision House also depicts several transitional elements being incorporated at Laureate Park such as the corrugated skin on the bump out at side, standing seam metal roof, the “hog fence” porch railing (which was used both outside and inside), the extension of column bases past the second floor porch floor at to grade below, and the serpentine whimsical window pattern at the stair way.

These are all elements that do not immediately catch the eye as being anything different, but upon closer look you see the wit and animation Transitional Architectural style can bring to a project. 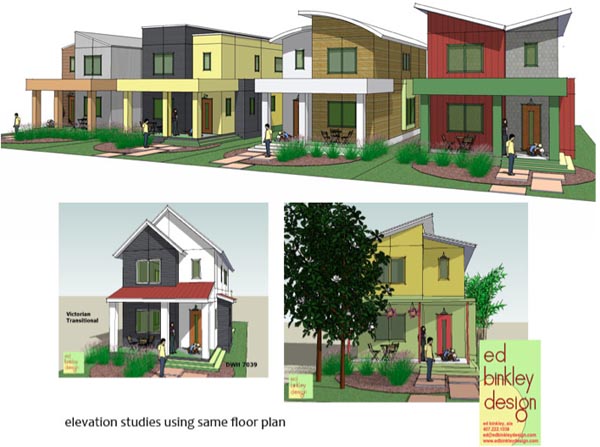 Ed has been instrumental in responsive housing design since 1985, having been a partner with two national architectural firms in the past, he opened "ed binkley design, llc" in July of 2009. He has a strong focus on an affordable, green, systems approach to housing, which coincides with his development of “the shelter series”, a collection of small rapidly built homes that incorporate sustainable principles. Ed’s experience also includes work with national and international green housing programs and the design of several demonstration homes that highlight sustainable design principals. He is a frequent speaker at symposiums, contributing editor to national publications and has been featured on a variety of HGTV and radio programs presenting his green building philosophies. Ed has a strong belief that green design starts with a responsible program and client…and the end result is only as successful as that collaboration is strong.