Too Right It's Black Friday: Our Relentless Consumption Is Trashing The Planet

Growth must go on – it’s the political imperative everywhere, and it’s destroying the Earth. But there’s no way of greening it, so we need a new system

Everyone wants everything – how is that going to work? The promise of economic growth is that the poor can live like the rich and the rich can live like the oligarchs. But already we are bursting through the physical limits of the planet that sustains us. Climate breakdown, soil loss, the collapse of habitats and species, the sea of plastic, insectageddon: all are driven by rising consumption. The promise of private luxury for everyone cannot be met: neither the physical nor the ecological space exists.

But growth must go on: this is everywhere the political imperative. And we must adjust our tastes accordingly. In the name of autonomy and choice, marketing uses the latest findings in neuroscience to break down our defences. Those who seek to resist must, like the Simple Lifers in Brave New World, be silenced – in this case by the media.

With every generation, the baseline of normalised consumption shifts. Thirty years ago, it was ridiculous to buy bottled water, where tap water is clean and abundant. Today, worldwide, we use a million plastic bottles a minute. 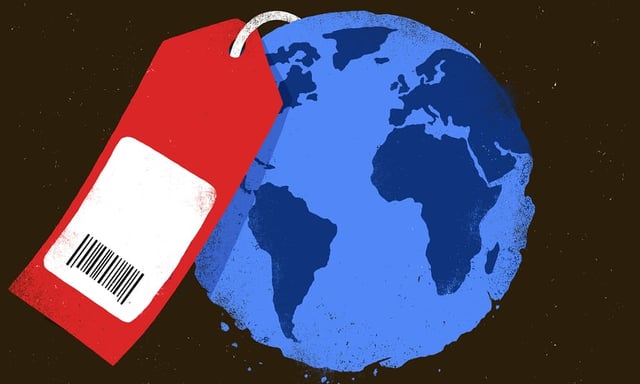 Every Friday is a Black Friday, every Christmas a more garish festival of destruction. Among the snow saunas, portable watermelon coolers and smartphones for dogs with which we are urged to fill our lives, my #extremecivilisation prize now goes to the PancakeBot: a 3D batter printer that allows you to eat the Mona Lisa, the Taj Mahal, or your dog’s bottom every morning. In practice, it will clog up your kitchen for a week until you decide you don’t have room for it. For junk like this, we’re trashing the living planet, and our own prospects of survival. Everything must go.

The ancillary promise is that, through green consumerism, we can reconcile perpetual growth with planetary survival. But a series of research papers reveal there is no significant difference between the ecological footprints of people who care and people who don’t. One recent article, published in the journal Environment and Behaviour, says those who identify themselves as conscious consumers use more energy and carbon than those who do not.

Why? Because environmental awareness tends to be higher among wealthy people. It is not attitudes that govern our impact on the planet but income. The richer we are, the bigger our footprint, regardless of our good intentions. Those who see themselves as green consumers, the research found, mainly focused on behaviours that had “relatively small benefits”.

I know people who recycle meticulously, save their plastic bags, carefully measure the water in their kettles, then take their holidays in the Caribbean, cancelling any environmental savings a hundredfold. I’ve come to believe that the recycling licences their long-haul flights. It persuades people they’ve gone green, enabling them to overlook their greater impacts.

None of this means that we should not try to reduce our footprint, but we should be aware of the limits of the exercise. Our behaviour within the system cannot change the outcomes of the system. It is the system itself that needs to change.

Research by Oxfam suggests that the world’s richest 1% (if your household has an income of £70,000 or more, this means you) produce about 175 times as much carbon as the poorest 10%. How, in a world in which everyone is supposed to aspire to high incomes, can we avoid turning the Earth, on which all prosperity depends, into a dust ball?

By decoupling, the economists tell us: detaching economic growth from our use of materials. So how well is this going? A paper in the journal Plos One finds that while, in some countries, relative decoupling has occurred, “no country has achieved absolute decoupling during the past 50 years”. What this means is that the amount of materials and energy associated with each increment of GDP might decline but, as growth outpaces efficiency, the total use of resources keeps rising. More important, the paper reveals that, in the long term, both absolute and relative decoupling from the use of essential resources is impossible, because of the physical limits of efficiency.

A global growth rate of 3% means that the size of the world economy doubles every 24 years. This is why environmental crises are accelerating at such a rate. Yet the plan is to ensure that it doubles and doubles again, and keeps doubling in perpetuity. In seeking to defend the living world from the maelstrom of destruction, we might believe we are fighting corporations and governments and the general foolishness of humankind. But they are all proxies for the real issue: perpetual growth on a planet that is not growing.

Those who justify this system insist that economic growth is essential for the relief of poverty. But a paper in the World Economic Review finds that the poorest 60% of the world’s people receive only 5% of the additional income generated by rising GDP. As a result, $111 (£84) of growth is required for every $1 reduction in poverty. This is why, on current trends, it would take 200 years to ensure that everyone receives $5 a day. By this point, average per capita income will have reached $1m a year, and the economy will be 175 times bigger than it is today. This is not a formula for poverty relief. It is a formula for the destruction of everything and everyone.

When you hear that something makes economic sense, this means it makes the opposite of common sense. Those sensible men and women who run the world’s treasuries and central banks, who see an indefinite rise in consumption as normal and necessary, are beserkers: smashing through the wonders of the living world, destroying the prosperity of future generations to sustain a set of figures that bear ever less relation to general welfare.

Green consumerism, material decoupling, sustainable growth: all are illusions, designed to justify an economic model that is driving us to catastrophe. The current system, based on private luxury and public squalor, will immiserate us all: under this model, luxury and deprivation are one beast with two heads.

We need a different system, rooted not in economic abstractions but in physical realities, that establish the parameters by which we judge its health. We need to build a world in which growth is unnecessary, a world of private sufficiency and public luxury. And we must do it before catastrophe forces our hand.

This article was originally posted on The Guardian and has been reposted here with the permission of the author, George Monbiot.