This is the best article of its type that we've seen. It's reprinted here with the author's permission--Matt Power, Editor-in-Chief

Codes for tiny houses are a complex issue, I’m going to attempt to break them down.  This is a lot of facts and some opinions, take it as you’d like but keep this in mind (and always consider motives in your research):  I have no skin in this game, my tiny house goals are 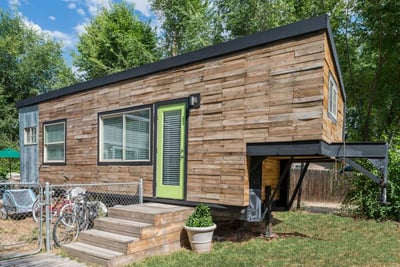 accomplished.  If I am asked to leave my home tomorrow I am fine with that.  I do not own a company, I don’t even make much money from this site.  I always stand solidly behind the DIY builder but definitely understand and encourage those who want a pre-built tiny home and certainly respect someone who chooses to build tiny houses for a living (it is no easy task and they seem to face a lot of opposition, in my opinion they don’t make enough per build to deal with the criticisms I’ve seen, but I digress…).

So, at the start, many, many years ago….

A guy wanted to build a very small house, he went to the BUILDING DEPARTMENT to get permits, like [almost] every build has to do to be legal (or face fines).  He was told he didn’t meet the minimum square foot standards.

Him: ‘Well what happens if I build it any way?

Building Dept. ‘We will have it removed and fine you for not following the proper path that EVERY structure in our city has to follow’

Try, try, try, the jurisdiction just wouldn’t budge and allow less than the minimum s.f.! No matter how much he proves he can meet every other code required.

DOT: ‘Sure that’s fine, let us know when you’re done and we will title and register your new LEGAL RV’

Him: ‘But I want to live in it all the time, not just recreate in it…’

DOT: ‘Oh, well you’re going to have to talk to the zoning department to see where you can live in an RV year round in your town…”

Zoning: ‘Well, we don’t have anywhere that you can live longer than ‘x’ amount of days in an RV but we have these nice RV parks here, here and here…’

Him: ‘Hmmm, well I don’t really want to live in an RV park… What if I just park it in my friends backyard… I mean how will you know if I am living in it or not?’

Zoning: ‘Well, we don’t police that stuff, if someone files a complaint we will have to ask you to vacate the property… and you’ll have ‘x’ amount of days to fix the situation’

Zoning: ‘Well, we are complaint based so if there is a complaint we will have to ask you to leave…’

Him: ‘but if no one complains no issue?’

And this is pretty much how Tiny Houses are regulated right now.  Sketchy, right?  Who wants to invest all this money to maybe be told they have to vacate their current situation?  This is that ‘grey area’ that some people are trying to fix… but it is a part of the tiny house movement since day one…

Remember, this guy just wanted to build a very small house, on a foundation.  The wheels are a work around that was taken to bypass a regulating agency, the building department.  By doing this he was able to avoid fines that would otherwise have been placed on the structure BUT also by doing this he has to deal with the uncertainty of his location… If he is reported, he won’t face fines but he’ll have to move… For this guy the benefits outweigh the risks so he goes forward… Follows DOT requirements and builds a homemade RV.  Then lives in it and get’s lucky, with no reports, or he doesn’t and he gets reported and has to move… the end.

There are 100 people who want to build a small place, all their own.  The go to pull permits, like EVERY build has to do, only to be told they can’t build that small…  The building department (who work directly for the citizens of their town) notice, ‘hey, we have a lot of folks asking to build small places, smaller than code currently allows… we should question this requirement…’ (this is why it’s important you TALK TO YOUR JURISDICTION about your desire to live tiny).  He processes the thought through city council, people show up to say, ‘yeah, this is a good idea!’ Changes are made and folks are allowed to live tiny, legally. Permitted and regulated through the city, just like all other structures in the given city.  Now 100 more people want to build their own small place, they are allowed to, no questions asked, it’s just normal…

So… If what you want is a tiny house on a foundation it is infinitely easier to do completely legally!  Go to your building department, ask if it’s allowed (know how big you want, maybe have a plan).  If they say no, ask about getting a variance from code.  If they say ‘yep!’, then there you are, done and off to the races living tiny completely legally! (and you can thank all of those annoying TV shows and click bait articles for helping to normalize it!)

Here is where it get’s tricky…

Some people LIKE the work around, I mean they are mobile, how cool is it to be able to move whenever you want and take your whole house with you! (Hint: It’s very cool!  There are thousands of retirees and families who have been doing that for years in the RV world)  It’s just that little ‘RV’ clause… You may say… ‘but these are not RVs, these are TINY HOUSES!’

It’s not a personal attack to say that. It doesn’t mean ‘the government is keeping you down’…  We are talking about codes and legalities, WE as a collective people have made those!  It is NOT ‘us vs them’ (and once you turn it into that sort of an argument you give up all of your ability to affect change!).  The thing is, ‘RV’ is the ONLY classification for a mobile structure that you can live any amount of time in.  You have mobile offices you can work out of, you have semi trailers, utility trailers, etc. None of those allow habitation, they don’t allow utilities, ovens, beds, etc.  RV’s are the ONLY classification that is close because they allow temporary habitation.

The thing is, they don’t have to follow any safety standards or rules other than the size requirements and hazard steps required by the DMV in most cases… but there is that pesky issue of not being able to live all the time in the ‘unregulated but probably fine, potential death trap…’

We have to change that!

Here are some solutions currently being offered:

Here’s an idea though…

And it’s just an idea… This came up as a possible solution given from a local zoning official at one of our local MeetUp groups… it’s a bit of a mix of the above options, zoning and building.

If you want to make a tiny house and you don’t want to move it, build on a foundation, you most likely can abymore, talk to your local building department.

If you want to make a tiny home to travel the country, you can, do it, talk to your local DMV for special requirements (they are probably few).  Just be aware of your parking situation and zoning ordinances locally, you are regulated as an ‘uncertified’ RV (unless you purchased a certified tiny house RV).

BUT, if you want to make a tiny home to live in full time in mostly one location but you MAY want to also move it at some point, you would have to do so to measurable safety standards while also paying attention to zoning codes, there are few places that allow full time RV use in a way that most people want to use their tiny house.

So… the idea… What about opening a new category, one that is clearly a vehicle, because there are wheels (this is not an insult but a categorization), yet a vehicle who has gone the extra mile to meet safety standards for full time use.  The officials words were to call it an ‘Advanced RV’.  It would be different than a typical RV or a homemade RV because it meets higher safety standards for full time use.  Yet it is still characterized as the vehicle it is, so it COULD be moved.  This would make it easier to open up a zoning classification separate from ‘RV’ but for something rated for full time use (a tiny house) while not opening a flood gate to ALL RVs which don’t necessarily meet those standards.

This WOULD mean that tiny houses wanting to achieve this level of location security would have to meet ANSI codes and possibly more strict IRC codes per building dept. (still very possible) and it may mean they would have to meet some vague material/aesthetic standards via zoning ordinances. But it may be a valid path?

As an example, this would allow an empty-nester to live permanently on their own land nine months of the year if it was approved for ‘advanced RV’ use (likely tied down and secured semi-permanently) then, in the winter hitch up their home and drive to Florida to live temporarily at their daughters location, within RV regulations.

Long story short, there isn’t necessarily a way to live legally and securely in a tiny house by avoiding codes. There are a lot of people living less than legally currently.  In the suggested solution it won’t take away anyone’s current abilities to live tiny in the ‘grey area’ but it WOULD open up a new legal path to this lifestyle, offering security to a greater amount of people, therefore allowing more people to set off on their tiny house journey.

Currently, you’re either ok with the ‘grey area’ and possibly moving or {opinion} you should be actively trying to work within the existing regulations to find a legal process to live tiny.  It’s a very complex and probably overwhelming issue for most, I write this as an overview so you can be aware of the obstacles and don’t get sucked into something that sounds ‘legit’ but really isn’t because I have seen a few of those offered now.

There have been a couple of other great articles posted on the topic:

Macy Miller is LEED AP BD+C certified, and lives with her family in a 230 square foot tiny house.