Thinking 'About' the Box, Not Outside It

Big Ideas? Apparently, everybody has them.

Apparently, everybody has them. All you have to do is listen to their messaging. It seems the killer business strategy nowadays is to latch onto the latest buzzword and ride that baby until the wheels fall off, or at least until it is replaced by whatever comes next.

Let's get real. How many truly new variations of burgers, pizzas or tacos are in that magical, irresistible cornucopia we have paraded in front of us week after week? Not many, but the "idea guys" would have us believe that they have turned the food industry upside down every time they come up with another hokey combination of the same old ingredients. Let's wrap it in an egg! Right. 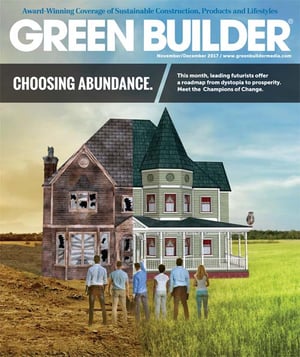 Equally laughable is the lack of originality offered by the talking heads. If you watch sports on television you know how rapidly and annoyingly, sportscasters everywhere glommed onto the dreamt-up term "physicality." Can somebody please come up with a replacement for that one? Careful, though. Recently listeners were treated to another jewel that rolled off the tongue of a color analyst. He referred to a team's "intentionality," and said it with a straight face. Seriously?

The big idea term du jour in the homebuilding industry, and many others, is some variation of the word "disrupt." Disruptive, Disruption. Disrupters, Disrupted. The marketing gurus are giddy with all the possibilities... disruptive technologies, disruptive systems, disruptive strategies, disruptive policies.

The good news is that the trade associations, along with the predictable gaggle of consultants and the traditional industry publications, have already started wearing this one out, a sure sign that the use of these will soon be considered too passe for the truly innovative communicators.

But in fairness, at least it has given the industry dinosaurs something to write and talk about other than millennials! We can be thankful for that.

Sorry folks. The homebuilding industry is not going to undergo the badly overdue makeover the disrupter crowd is crowing about as a result of outside pressure from a combination of new products, building systems, advances in performance or brilliant new strategies. Sure, these are all essential ingredients in the recipe, but they're not going to make a meal by themselves. You can pour on all the secret sauce you want, but if it starts out as junk food it's going to end up that way when it hits the plate.

If the industry finds itself on a new course, it will be because a relatively small number of builders are successful in taking meaningful market share way from those entrenched in the current model. Nothing succeeds like success. When a new generation of innovative builders—who are determined to deliver the homes we're all capable of—can demonstrate that their products will outsell the mediocre, predictable offerings that dominate the current choices homebuyers are stuck with, the disruption will take place from within. Protectors of the status quo will do whatever it takes to escape the drain they're currently circling and grab a seat on the bandwagon.