It won’t be long before green power is the No. 1 source for all homes.

Note: This article is an excerpt from The Third Industrial Revolution Final Report RNE, a combination of narratives and proposals on technology and its use toward green business collaborations.

The bulk of the energy we use to heat our homes and run our appliances, power our businesses, drive our vehicles, and operate every part of the global economy will soon be generated at near-zero marginal cost and be nearly free in the coming decades. That is already the case for several million early adopters in the European Union who have transformed their homes and businesses into micro-power plants to harvest renewable energy onsite. Currently, 32 percent of the electricity powering Germany comes from solar, wind and other renewable energies. By 2030, a minimum of 50 percent of the electricity powering Germany will be generated by renewable energies. 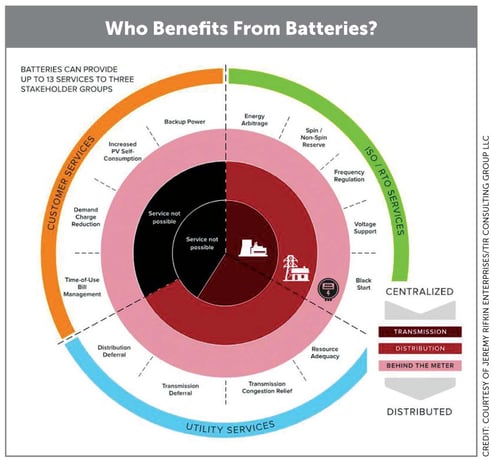 Batteries offer a dependable backup for more than a dozen groups during times of high energy demand.

The quickening pace of renewable energy deployment is due, in large part, to the plunging cost of solar and wind energy harvesting technologies. The reduction in fixed costs of solar and wind technologies have been on exponential curves for more than 20 years, as shown in Figure 1. In 1977, the cost of generating a single watt of solar electricity was $76, and by 2017 the cost is about $0.55 per watt. After the fixed costs for the installation of solar and wind are paid back—often in as little as two to eight years—the marginal cost of the harvested energy is nearly free. Unlike fossil fuels and uranium for nuclear power, in which the commodity itself always costs something, the sun and the wind are free.

The impact on society of near-zero marginal cost solar and wind energy is all the more pronounced when we consider the enormous potential of these energy sources. If we could grab hold of one-tenth of one percent of the sun’s energy that reaches Earth, it would give us six times the energy we now use across the global economy. Like solar radiation, wind is ubiquitous and blows everywhere in the world—although its strength and frequency varies. A Stanford University study on global wind capacity concluded that if 20 percent of the world’s available wind was harvested, it would generate seven times more electricity than we currently use to run the entire global economy.

However, the Netherlands has begun to embrace far more ambitious renewable energy targets in the past year. Solar panel sales alone increased in the first half of 2015 between 70 and 100 percent compared to the same period a year before, with the installation of more than 2 million panels. While only 0.2 percent of the electricity generated in the Netherlands is produced by solar, the new data points to a potential leap forward in adoption of solar technology and other underutilized renewable energies. A summary of renewable energy opportunities for the MRDH Roadmap Next Economy can be found in Figure 2. 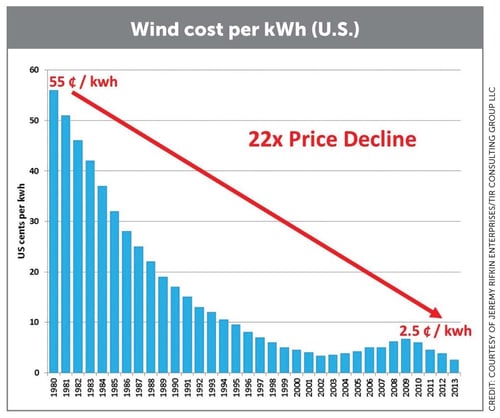 Over the past three decades, renewable energy deployment has sped up while the cost of solar and wind energy harvesting technologies had dropped.

The Energy Internet is comprised of four foundational pillars, all of which have to be phased-in simultaneously in the Metropolitan Region of Rotterdam and The Hague for the system to operate efficiently.

First, buildings and other infrastructure will need to be refurbished and retrofitted to make them more energy efficient so that renewable energy technologies can be installed to generate power for immediate use or for delivery back to the electricity grid for compensation.

Second, ambitious targets must be set to replace fossil fuels and nuclear power with renewable energy sources. To achieve this goal, various government incentives need to be introduced to encourage early adopters to transform buildings and property sites into micro-power generation facilities.

Third, storage technologies including hydrogen fuel cells, batteries, water pumping, etc., will need to be embedded at local generation sites and across the electricity grid to manage both the flow of intermittent green electricity and the stabilization of peak and base loads.

Fourth, advanced metering infrastructures and other digital technologies like energy management systems will need to be installed in every building, transforming the energy grid into a fully digitized bidirectional system in order to manage multiple sources of energy flowing to the grid from local generators (smart grid implementation).

The Dutch utility companies have announced the nationwide installation of smart electricity meters with the goal of 100 percent deployment between 2016 and 2020. This will enable passive consumers of energy in the Metropolitan Region of Rotterdam and The Hague to become active prosumers of their own green energy, which they can then use off-grid to manage their facilities or sell back to the Energy Internet.

[In addition], every parking space will need to be equipped with a charging station to allow electric and fuel cell vehicles to secure power from the Energy Internet, as well as sell power back to the electricity grid. Electric and fuel cell vehicles connected to the Energy Internet also provide a massive backup storage system that can send electricity to the grid during peak demand, when the price of electricity has spiked, allowing vehicle owners to be appropriately compensated for contributing their electricity to the network. Figure 3 provides representative battery energy storage applications for further clarity.

The phase-in and the integration of these foundational pillars will transform the electricity grid of the Metropolitan Region of Rotterdam and The Hague from a centralized to a distributed energy system, and from fossil fuel and nuclear generation to renewable energy. In the new system, every business, neighborhood and homeowner becomes the producer of electricity, sharing their surplus with others on a smart Energy Internet that is beginning to stretch across national and continental landmasses.

This massive shift has started to appear in Germany with the establishment of electricity cooperatives. Most of these cooperatives were successful in securing low interest loans from banks to install solar, wind and other renewable energies on site. The banks were more than happy to provide the loans, assured that the funds would be paid back by the premium price the cooperatives would receive—via feed-in-tariffs—from selling the new green electricity back to the grid.

The rise of electric cooperatives has forced electricity companies to rethink their business practices. A decade ago, four giant vertically integrated electricity generating companies—E.ON, RWE, EnBW, and Vattenfall—were producing much of the electricity powering Germany. Today, they are producing less than 7 percent of the new green electricity that’s taking Germany into a Third Industrial Revolution.

Peter Terium, CEO of RWE, the German-based energy company, acknowledges the massive shift taking place in Germany from centralized to distributed power, and says that the bigger power and utility companies “have to adjust to the fact that, in the longer term, earning capacity in conventional electricity generation will be markedly below what we’ve seen in recent years.”

Jeremy Rifkin is an American economist and author whose best-selling Third Industrial Revolution served as a blueprint for Germany’s transition to a low-carbon economy, and China’s strategic acceptance of climate policy. He is also president of TIR Consulting Group, a coalition of companies and consulting organizations in the fields of energy efficiency, renewable energy technologies, construction, advanced fabrication manufacturing, engineering, urban planning, architecture, real estate, information and communication technologies, power and utilities, and transport and logistics. He may be contacted at jrifkin@foet.org. 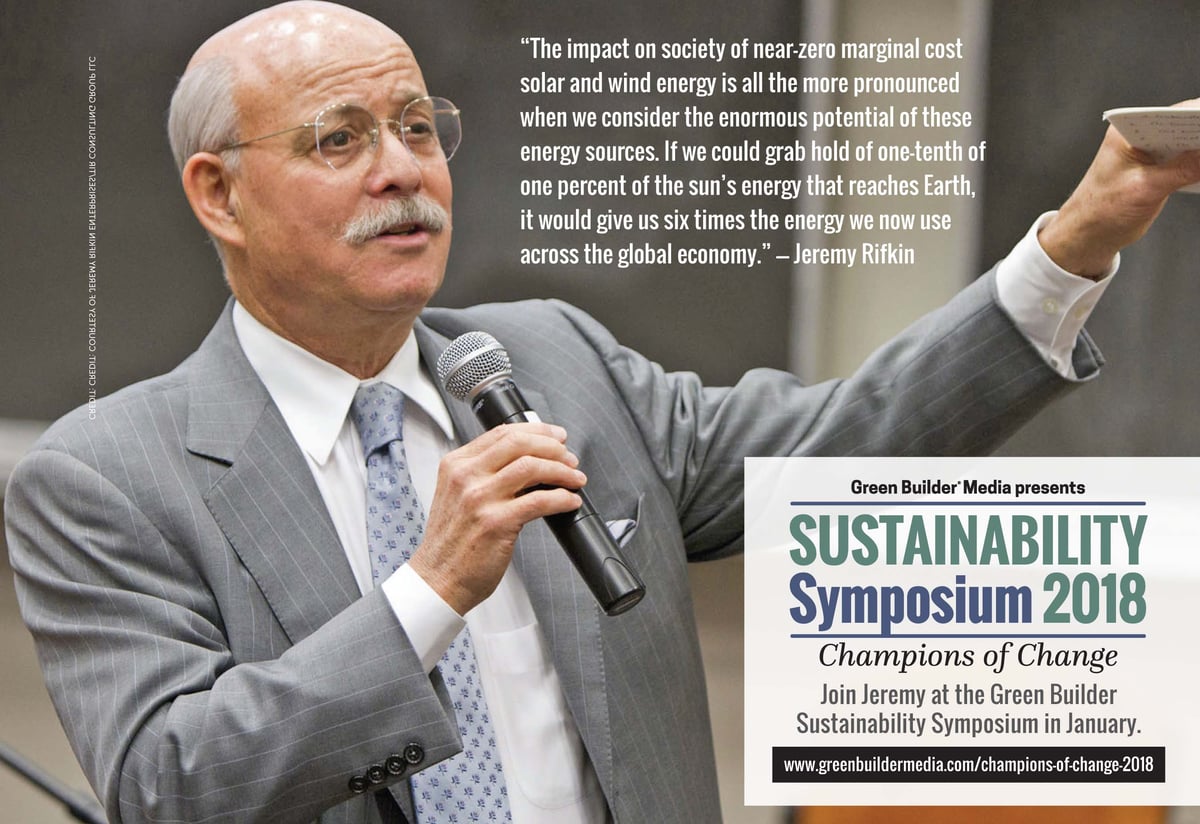 Jeremy Rifkin is an American economist and author whose best-selling Third Industrial Revolution served as a blueprint for Germany’s transition to a low-carbon economy, and China’s strategic acceptance of climate policy. He is also president of TIR Consulting Group, a coalition of companies and consulting organizations in the fields of energy efficiency, renewable energy technologies, construction, advanced fabrication manufacturing, engineering, urban planning, architecture, real estate, information and communication technologies, power and utilities, and transport and logistics.