The Evolving Role of Associations: RESNET

This standards maker has created the standard in energy efficiency ratings systems.

Number of members: 1,900 certified RESNET HERS Raters
Headquarters: Oceanside, Calif.
Website: www.resnet.us; www.hersindex.com
Number of active sites: Nationwide
Key Services offered: A Home Energy Rating System (HERS) Index rating assessment, conducted by a certified RESNET HERS rater; a detailed report of all of a home’s energy problems supplied to the homeowner.
Mission statement: To make the energy use of all homes transparent, thereby driving residential sector energy use toward net zero.ext here

“Half of all new homebuyers want an energy-efficient home. The HERS Index makes what was invisible—energy efficiency—into a visible factor by which to compare homes. As builders help homeowners and buyers compare total home cost and value, the HERS Index Score provides a third-party verification of a home’s energy efficiency.” —Steve Baden, RESNET Executive Director

Today, RESNET is a national standards-making body for building energy efficiency rating and certification systems in the United States. RESNET is recognized by federal government agencies for verification of building energy performance for such programs as federal tax incentives. And it is recognized by the U.S. mortgage industry for capitalizing a building’s energy performance in the mortgage loan, and by homeowners for improving home energy efficiency, resulting in substantial savings on their utility bills.

The key to that success is the Home Energy Rating System (HERS) Index, developed by RESNET, in which a numerical value is assigned to homes based on energy performance. The HERS Index is an easy-to-understand energy efficiency measuring tool by which a home’s energy efficiency is rated; where a lower score means a more efficient home. It can be described as a sort of miles-per-gallon sticker for houses, giving prospective buyers and homeowners an insight as to how the home ranks in terms of energy efficiency.

More than 15 states and over 300 local jurisdictions have adopted the HERS Index option in their energy codes, while the mortgage industry has seen a 32 percent lower default rate for lower HERS-scored homes. Real estate appraisers can now view a home’s HERS Index score and its estimated energy cost and savings.

As of 2017, more than 2 million homes have been rated by certified RESNET HERS Raters, using the HERS Index, helping homeowners understand the energy performance of the home and the expected reduction of energy bills. As a result, it is estimated that carbon dioxide emissions were reduced by over 4 million tons annually (the equivalent of taking more than 766,000 cars off the road each year), and consumers have seen annual energy bill savings of over $1 billion.

“For RESNET, it took 20 years to achieve our first million HERS-scored homes, but barely five years to see the second million homes milestone, showing how demand in the marketplace has grown,” RESNET Executive Director Steve Baden says. “Every year, nearly one in four new homes sold receive HERS Index scores, because buyers want to compare and save the most on their homes’ utility bills.”

Meanwhile, the average scores of HERS-rated homes have dropped from 100 in 2006, to 61 in 2017. That makes for an increase of 39 percent in the energy efficiency of HERS-rated homes throughout the marketplace—a sign of how RESNET is encouraging sustainability among its members, its builder partners and the U.S. housing market, Baden adds. 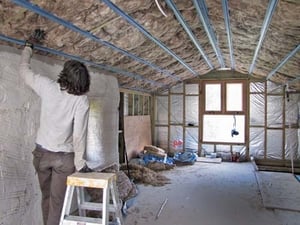 In its 20th year in business as a woman-owned small business, PEG’s collaboration with RESNET has enabled the company to grow to more than 100 team members serving 13 of the 15 largest homebuilders nationwide. PEG officials note that its RESNET membership has also been a significant factor in its selection by the EPA’s Energy Star program as a Partner of the Year for the last several years, and as a Sustained Excellence recipient for the past two years.

Many state agencies, utility companies and municipalities across the U.S. recognize RESNET and its members as credentialed experts in the field of residential energy efficiency. The application of training standards, technical standards and industry advocacy are key aspects of this acknowledged expertise. PEG’s team of RESNET Raters undergoes extensive classroom and field training, constant field and file quality assurance, and routine continuing education.

Company officials note that the PEG-RESNET partnership is a two-way street. PEG’s involvement includes committee participation, board meeting attendance, public comment on standards, and participation and sponsorship of annual events such as the RESNET conference.
Because many PEG builder clients are participants in the RESNET Energy Smart Builder program, PEG offers support in the form of consumer-facing information. There is also support for sales and marketing, construction, and operational use of these advanced homes by homeowners who benefit from these independently certified homes and the RESNET standards applied to their design and construction.