A one-for-all focus brings a lot to the table for the window film industry.

The International Window Film Association (IWFA) is a unified industry body of window film dealers, distributors and manufacturers that facilitates growth of the window film industry though education, research, advocacy and consumer awareness. The organization builds alliances with trade associations, utilities and government agencies to advance dealers’ and distributors’ businesses, and provide value to their customers.

Number of members: 500
Member breakdown: Manufacturers (8); suppliers of various services and supplies (7); remainder consists of professional installing dealers (90 percent) and distributors (10 percent).
Headquarters: Martinsville, Va.; Brussels, Belgium (European chapter)
Website: www.iwfa.com
Number of active sites: N/A
Key Services offered: A members-only section of the IWFA website with current updates of industry news; business listings and a dealer locator for consumers; specialized accreditation programs; access to IWFA state legislative consultant; use of the IWFA published test reports; discounted prices on educational and training manuals; representation in associated organizations such as the National Glass Association, Glass Association of North America, PGC International and others.
Mission statement: The mission of the IWFA is to provide value-added services to its membership, to help sustain and grow members’ businesses, and to partner with manufacturers and other members to increase consumer awareness and demand for all types of professionally installed window film products.text here

IWFA began in 1988 in response to a need for grassroots industry input into regulatory and legislative issues on the use of window film in automobiles. The manufacturer members of the industry already belonged to another professional trade association through which they handled issues needing only their involvement, which at that time dealt more with architectural uses of window films and generally were technical in nature.

However, that organization only allowed manufacturers to be members, so in 1991 the IWFA was formed as an organization that included all levels of the industry: manufacturer, distributor and installing dealer. In 2010, the window film efforts handled by the other organization were merged into the IWFA.

The IWFA Board consists of leader representatives from its Manufacturer, Distributor and Professional Dealer memberships. Each is committed to fulfilling the mission of the IWFA, and members serve on various committees, including Legislative, Member Services and Education. The IWFA also has access to professional consultants on legislative issues.

According to IWFA President Darrell Smith, the association constantly teaches its members about what sustainability means. The IWFA includes this type of sustainability information in press releases, the IWFA blog and e-newsletter, which all members can access. “Whenever you can upgrade or enhance an existing building component—such as a window with window film—rather than replacing the entire item, that is making a difference in sustainability,” Smith says. “[In this case], it prevents more waste in the landfill. Upgrading a building component can also mean making it more energy efficient, which can make the component last longer.”

For several decades, the IWFA has been the third-party industry source for accurate technical information on window film products and its uses. The IWFA educates industry influencers and consumers on the energy savings, protection against broken glass and UV properties of window film and delivers standardized training and educational materials and seminars to industry members, building and energy organizations and the public. And, IWFA supports the growth of the window film industry by educating policymakers involved in creation and enforcement of building codes, auto tint laws, legislation and financial incentives at the national and local level. 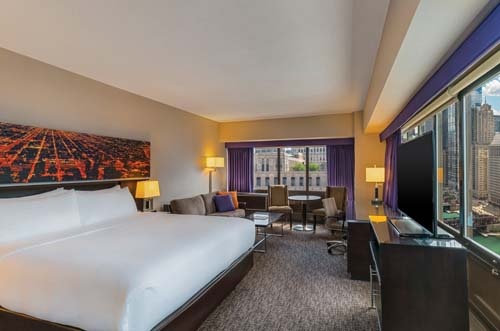 The Holiday Inn Chicago Mart Plaza is located atop the landmark, 24-story mixed use Apparel Center. The hotel sits near the confluence of the east, north and south branches of the Chicago River. The complex was designed by Skidmore, Owing and Merrill, known for designing the tallest buildings in the world. The 2.5 million-square-foot riverfront complex opened in January 1977.

Direct ultraviolet exposure from the hotel’s 42,000-square-foot sky-lit atrium caused the hotel’s Front Desk employees to experience glare in the morning until the sun arched across the horizon. This direct exposure made it difficult for them to perform their tasks. Additionally, solar loading created excessive heat build-up on the atrium’s upper floors, creating uncomfortable temperatures year-round. During winter, air conditioning had to be run mid-morning to late afternoon to mitigate the raised space temperature.

The hotel installed window treatment on the lobby level, but it blocked the magnificent views of the river and skyline.

uest rooms that faced south and west had solar loading and glare issues. Window treatment was left in varying positions, causing a checkerboard effect as viewed from the street, reducing its curb appeal.

Director of Facilities Bruno LaMountain looked into ways to improve the comfort and climate of the hotel. At the time, the building was working toward LEED certification and was undergoing a $20 million redesign with extensive ecological programs including installing window film to reduce solar loading and energy costs.

John Parker, president of the International Window Film Association and owner of National Security & Window Filming in Oak Forest, Ill., evaluated what application of window film would be best for the hotel.

Parker and his team came up with a solution: Install an exterior window film designed to protect the atrium skylights from exposure to the elements, and another window film for the guestrooms that would provide the protection from solar load and sun damage without darkening views from the guestrooms.

“Overall we have reduced the temperature in the lobby area significantly,” says LaMountain. “Now on hot summer days, the HVAC system can easily handle the cooling load while maintaining electrical consumption. We now have extra cooling capacity.”

The guest rooms were the next phase of installation. Older existing window film was removed and new, more advanced window film installed. Reducing solar load and glare were achieved.

With the window film project and other renovations completed, the Holiday Inn Chicago Mart Plaza was awarded a LEED Gold Certification by the U.S. Green Building Council.