It’s solar power’s shining moment—the renewable energy source is currently growing faster than any other segment in the energy industry.

LAST YEAR, a new solar system was installed in the U.S. every three minutes. Creative financing solutions and plummeting panel prices have made solar widely accessible for homeowners and businesses alike. And by next year, experts predict that solar will actually be the cheapest form of electricity in many U.S. states. 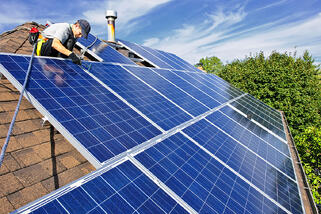 The solar industry is proving to be an essential engine of economic growth and job creation in our country. According to the National Solar Jobs Census 2014, the renewables industry “continues to exceed growth expectations, adding workers at a rate nearly 20 times faster than the overall economy and accounting for 1.3% of all jobs created in the U.S. over the past year. Our long-term research shows that solar industry employment has grown by 86% in the past five years, resulting in nearly 80,000 domestic living-wage jobs. As of November 2014, the solar industry employs 173,807 solar workers, representing a growth rate of 21.8% since November 2013. Over the next 12 months, employers surveyed expect to see total employment in the solar industry increase by 20.9% to 210,060 solar workers.”

Representing one out of every 78 jobs currently created in the US, the solar industry is flying high, blowing past the shrinking coal industry, which currently employs 93,185 Americans. And, the solar industry’s annual 31,000 new jobs trumps the entire oil and gas pipeline construction and extraction sector, which only added 19,217 jobs in 2014.

But even with its clear contribution to economic development and job creation, solar is still experiencing opposition from utilities and lawmakers, and the industry will continue to face challenges that may hinder its growth potential.

Solar should, theoretically, be warmly embraced by utilities, since it helps solve peak demand issues that would otherwise require utilities to build expensive plants that would only run at partial capacity when energy hits highest usage levels.

However, utilities across the country are pushing back against solar, claiming that net-metering enables customers with solar systems to receive financial benefits for excess kilowatts (they get paid for energy they feed back into the grid) without paying their fair share for grid maintenance, thereby making energy costs higher for users that don’t have solar systems.

In California, the state’s largest utility, Pacific Gas and Electric, currently implements a tiered pricing system, charging large energy users more per kilowatt than smaller users. The utility claims that when a customer installs a solar system, their energy usage—and their rate—drops, placing a larger burden on non-solar customers (while this may be true, the utility conveniently omits from this argument any talking points about the cut to its bottom line when a customer uses less energy). To level the playing field, PG&E is planning to reduce the discrepancy in pricing tiers and implement a fixed monthly grid maintenance surcharge for customers with solar systems. According to experts, the monthly fee will reduce the cost advantages of going solar and possibly inhibit the growth of solar adoption in the state.

Solar advocates in Florida are trying to do an end-run on utilities altogether. The advocacy group Floridians for Solar Choice has brought together proponents from both sides of the aisle to promote local, small-scale solar energy generation by amending the state law that requires customers to buy energy from utilities.

In Arizona, the entity that regulates the state’s utilities, the Arizona Corporation Commission, recently implemented a $5 monthly fee for solar customers, and utilities have added rate increases and grid maintenance fees. In fact, certain Arizona-based utilities have made it so prohibitive for customers to adopt solar that SolarCity recently filed a lawsuit against the Salt River Project (SRP) utility, claiming that their new rate plan excessively penalizes solar customers.

Beyond politics, solar faces technological challenges in the areas of storage and delivery. Fortunately, technology is constantly improving, and with substantial investments in lithium ion batteries (namely, Elon Musk’s $5 billion investment in battery “gigafactories”), it’s expected that viable solutions will be readily accessible in the near future.

Despite the short-sightedness of certain utilities and legislators, as well as the technological obstacles, the solar industry’s growth trajectory will most likely continue to soar, with experts forecasting another year of over 20% growth in 2015.

From a long-term perspective, solar is a winning proposition. Unlike fossil fuels, sunshine don’t have diminishing supply. And while fossil fuels will continue to get more expensive as supplies decrease, sunshine offers the promise of continued growth and price stability.

And solar isn't just for homes. It's moving so rapidly into the consumer market that it's hard to keep track of the latest solar powered gadgets, from lighting to robots to portable smartphone chargers.

Solar and other renewable energy sources help us reconsider today’s reality and reimagine tomorrow’s possibility—from a resource constrained world to one of true abundance. It’s time to clear away all impediments that hinder the massive and rapid adoption of this obvious solution.