We know how and where buildings fail in hurricanes. Now it's time to prepare for the worst.

After Hurricane Katrina in 2005, I visited New Orleans several times to explore and write about what survived—and what didn’t. I also visited the site of the La Plata, Md., F4 tornado back in 2002, and wrote about what happened there—whole houses swept off their foundations, exploding roofs, chimney failures. Back then, those seemed like freak storms. Now, they feel like early warnings of what was to come.
We have entered a new age of weather extremes, at least part of it human induced. That’s simply a scientific fact. This year’s double whammy of Hurricane Harvey and Hurricane Irma was supercharged by higher-than-normal ocean temperatures. And those temperatures continue to rise each year. Given this situation, how are our Southern friends and families to cope? Will South Florida, Houston, Puerto Rico, the Virgin Islands and other points south simply become unlivable?

Let’s hope not. But we need to take the threat seriously. Builders now have the knowledge AND the products to design and build more-resilient housing. Also, new coastal building codes have proven remarkably effective. After Hurricane Charley, FEMA found that not one home built to the 2001 Florida Building Code failed structurally.

FEMA also has done some first-rate research over the past decade. They have published several post-mortem reports on the aftermath of major hurricanes. Sifting through them, it becomes apparent that many aspects of modern homes and multi-family units could be further amended and fortified at a reasonable cost, particularly in the new construction phase.

A key takeaway is that both materials and process matter. If buildings are designed and assembled with extreme weather vulnerabilities in mind, they inevitably perform better when the crisis strikes.

For builders, architects and building designers, there’s actually some good news buried in the post-mortem reports from FEMA: Many of the worst failures could have been prevented simply by strictly adhering to the building code.

They identified numerous “weak points” in the building process that were severely damaged by Charley. I would concur, based on personal observation of dozens of ruined homes.

To keep this simple and digestible, I’ve pulled out nine of the most problematic building science flaws and offered solutions.  Illustrations can be found in the slide show at the end of this article.

Here are a few other parts of existing homes that have been found to be especially vulnerable during hurricanes:

Vanishing soffits. Unless they are special, hurricane-resistant types, they are often blown away, allowing water to enter buildings. 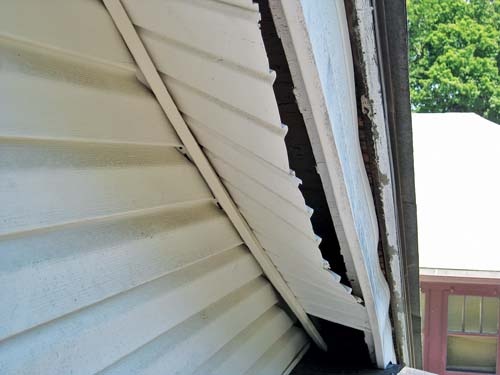 Flying vents. Rooftop-mounted equipment can be blown off roofs or severely damaged. 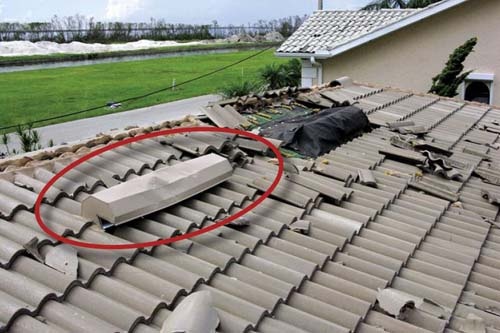 Crumpled garage doors. Unreinforced doors can be penetrated and blown out or simply blown in. Either can cause significant structural damage to the garages.

Airborne carports. These, along with other accessory structures such as pool houses or screened lanais attached to manufactured homes are frequently blown off, creating additional debris. 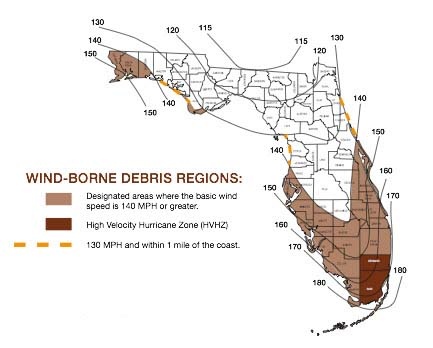 1. Design wind loads used were too low, resulting in members and connections too weak for the winds encountered, and roof and framing damage.

This is primarily a problem with older homes built before codes were improved, subject to the rigors of corrosion (see page 21]) or poor workmanship, especially in homes where two structural systems are combined. A common failure point in high winds, for example, has been the weak linkage between concrete masonry walls and engineered truss roof systems. As Florida’s Division of Emergency Management notes, “the vast majority” of older CMU homes simply had a 2 x 8 plate attached to the top of the block, often with only a few widely spaced anchors. Rafters were then toenailed to this face plate. For new and retrofits, this plate must be attached by embedding anchor bolts of a half-inch or larger diameter, spaced no more than 48 inches. The bolt must be installed within a couple of inches of the end of any plate.

Also, washers and nuts must fit without gouging out the wood. I would recommend stainless steel anchors (see item No. 6).

2. Degradation of building elements and connections due to material deterioration, insect infestation or lack of proper preventive maintenance resulted in premature building and envelope system failure.

I would classify this as the No. 1 issue of concern in hurricane-threatened regions. The Insurance Journal notes that the age of a home has a direct correspondence to the level of damage inflicted by a hurricane. Homes in Florida built between 1994 and the 2001 code upgrade, for example suffered much more than newer homes. But homes built prior to 1994 fared even more poorly. Hurricane Andrew in 1992 destroyed 125,000 Florida homes.

An important consideration for the future is the intermixing of new and older homes. A 30-year-old property can literally blow to pieces in a storm, and all of its components, such as roof tiles, 2 x 4s and plywood, become airborne projectiles. And that’s not even considering the force of a home carried off of its foundation by storm surge flooding. Some areas of Florida are designated as a windborne debris region, where new homes requiring impact glass and other features (see page 25).

The best defense is to build the home as we’ve suggested here, with corrosion-resistant materials, sufficient high-quality fasteners and straps, with the goal to make future homes much more able to maintain their hurricane resistance than their predecessors.

3. Structural design that did not account for unprotected glazing, leading to structural failures due to increased internal pressures.

Glazings in larger windows have been known to blow completely out of their frames, even if the glazing is laminated or otherwise protected. This negates the advantages of impact glass or applied impact window films. However, the solution may be simple: Increase the number of fasteners holding the frame in place. It’s too easy to cut corners and apply fewer fasteners than recommended by the manufacturer.

4. Corrosion of anchors or connectors that attach the building to the foundations or tie structural elements together resulted in structural collapse in some instances.

Again, this is a relatively easy issue to address. Assume the worst, when it comes to corrosion. Keep in mind that most concrete at the top of a concrete slab or foundation wall can only dry to about the same level of moisture as the ambient air. So in the Southeast, it will remain wetter than out west. Also, if the concrete was installed without vapor barriers underneath it, its moisture level will follow the ups and downs of the adjacent soil. Metal fasteners will be constantly exposed.

Fortunately, corrosion-resistant versions of foundation anchors are now widely available. For example, Simpson sells 25 stainless steel, half-inch concrete anchors (5-1/2-inch length) for about $70. That’s about twice the cost of galvanized versions, but your clients will probably understand why it’s important. Be sure to have an engineer recommend the best size/thickness.

5. Corrosion of ties or fasteners used to attach siding to the wall structure led to loss of wall cladding and water intrusion.

This may be one of the easiest resiliency improvements: upgrading to a better-quality sheathing fastener. The corrosion of fasteners has been heavily researched. We know that galvanized fasteners hold up better than mild steel, and the treated wood accelerates fastener corrosion. But we have to be realistic: Most builders today use nailguns, not hammers, to attach sheathing and roof decking. Fortunately, you can find plenty of corrosion-resistant products, such as type 316 stainless steel fasteners. Here’s one online source: http://bit.ly/2iHpvJO

Incidentally, the increasingly popular Huber Zip System R-Sheathing can be used in coastal zones where basic wind speed is 100 mph, but must be designed by a professional as a shear wall. I would also recommend selecting a siding system with good impact resistance, such as LP SmartSide engineered lumber, solid-sawn wood or some brands of fiber cement. FEMA’s analysis (http://bit.ly/2icj9y9) of post-Katrina damage found that homes with the siding through-nailed directly into wood studs performed best, and that nailing should not exceed a 24-inch gap.

Pressurization of homes can literally blow the top off a structure. Impact glass tends to meet building code, but it’s expensive and not always optimal. My recommendation would be to install impact glass even in high-risk areas such as Florida—whether code mandated or not—but use shutters in the coastal zone. Sure, the glass can slow depressurization. But multiple strikes by debris could compromise it, leading to failure. FEMA can offer examples of storm-shuttered houses that survived Category 4 destruction, located right next to unshuttered ones that did not.

Elevated homes tend to survive flooding much better than those on low-lying foundations. Flood vents in elevated reinforced block or monolithic foundations can save a home, if flood levels adhere to “normal” levels. But let’s assume future storm surges WILL exceed current height estimates—and focus on the use of pilings.

After Hurricane Fran in 1996, FEMA conducted a study of what happened to stilt homes. The agency found that:
“A significant reduction in building losses was observed in similarly sized oceanfront buildings constructed after the North Carolina Building Code was amended in 1986 to require a minimum embedment to 5 feet National Geodetic Vertical Datum (NGVD), or 16 feet below the original ground elevation, whichever is shallower, for pilings near the ocean.”

Bottom line: The depth is key. It should be noted, however, that pilings do not guarantee an unscathed structure after a storm:

“A study of Topsail Island found that 98 percent of post-1986 oceanfront houses (200 of 205) remained after the hurricane. Ninety-two percent of the total displayed no significant damage to the integrity of the piling foundation. However, 5 percent were found to have leaning.”
FEMA tested the leaning buildings to find out what happened. They discovered that among the leaning buildings, “none of the leaning pilings tested met the required piling embedment standard. Many were much shorter.”

In other words, the contractors failed. Out of this research, the suggestion was made that pilings be embedded to a minimum depth of 10 feet NGVD, without exception.

8. Small or missing strapping to anchor the roof structure to the walls led to roof framing damage.

Again, this problem applies primarily to older homes. But it’s also an important reminder to contractors to check the workmanship of their framing crews. There’s no room for skipping rafter straps to save time. Strap size and types should be evaluated with each new building design. Simpson Strong-Tie makes about 20 different types of straps, each designed for a certain uplift. Don’t guess. Download the company’s High-Wind-Resistant Construction Application Guide (http://bit.ly/1r4DKa0), and make sure the straps you specify are right for worst-case wind uplift.

It’s well known that unreinforced masonry can be extremely dangerous in an earthquake. But recent experience shows it also can’t be trusted in hurricane winds, not to mention flood surges. The simplest takeaway for builders is: Don’t build masonry homes without rebar and other reinforcement, under ANY circumstances. I would apply this rule of thumb even to homes that do not specifically lie in high-wind zones. Any home in Florida, frankly, should be built reinforced. Retrofitting existing buildings with reinforcement is also possible, but obviously quite costly and difficult.

And simply reinforcing the wall itself is not enough to head off cataclysmic damage from a storm. Other systems—windows, shutters, top plates—must be considered as well.