The builder almost doubled the original floorplan of this 1950s ranch and converted it to a duplex, reusing the old frame and plaster by insulating from the outside. Spray foam ensures that the remodeled structure is much more energy efficient. 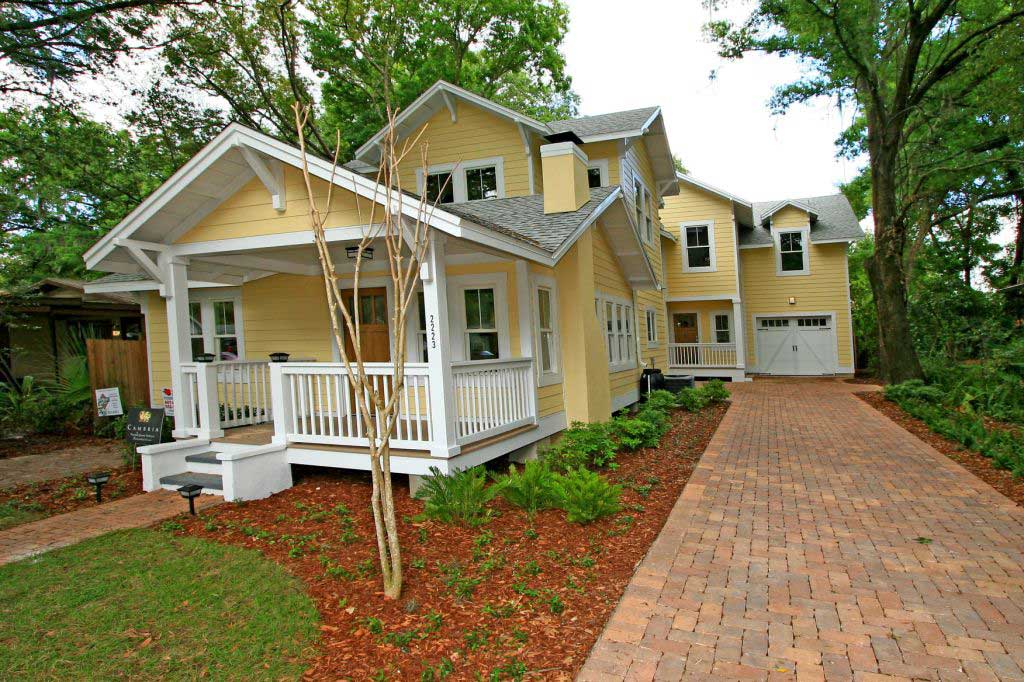 WHEN DESIGN/BUILDER Greg Hardwick first eyed this cottage property, he says he was tempted to simply tear it down and start from the ground up. But that approach wouldn’t serve his greater purpose—to demonstrate how a green remodel can be done right, from demolition to final finish.

“We actually purchased the property with the idea using the Florida Green Building Coalition standard,” Hardwick recalls. “This old neighborhood of College Park has a lot of older, craftsman-style duplexes, so converting the single family home over made sense. At the same time, the back of the home came only to the midpoint of the lot, so we had plenty of room to add on. That’s why the back unit is completely new.”

Hardwick tried to preserve and reuse as much of the old structure as possible—to the point of deconstructing the old wood frame, removing nails and fasteners, and putting the pieces back to work.

“I’d say we reused 90 percent of the old frame,” he recalls. “We did get a benefit from doing it that way, which was that we never took the roof off—so we were able to remodel and keep the house dried in throughout the process; nothing got exposed to unwanted moisture."

From the Outside In

Hardwick took a novel approach to insulating the old home’s walls. He wanted to preserve the old plaster and lathe walls (and keep that material out of the landfill). So his crews stripped off the exterior siding, exposing the 2x4 wall cavities. They then sprayed expanding BioBased foam into cavities.

“We basically rebuilt the wall assembly from there,” Hardwick recalls. “I wanted to be very aware of water management, so we put on a special housewrap with drainage channels (GreenGuard “RainDrop:), especially on the second floor. In Florida, it’s important because we get the occasional wind-driven storm, and even with 2 ft. overhangs, you need extra protection against the rain.”

Hardwick also replaced the roof with a light colored asphalt, and sheathed the house with fiber cement HardiePlank. Of course, the rear half of the home was built new from the ground up. That section is essentially a self-contained, three-bedroom unit with 2,250 square feet of space. The remodeled front of the home gained about 350 square feet, bringing it to 1,150 square feet.

To condition that space, the builder put in Carrier heat pumps. He says that despite the home’s newly tightened shell, he chose not to install mechanical ventilation.

“I don’t like to do those on small homes like these,” he explains, “because I don’t like technology that requires ongoing maintenance and can eventually break down. Instead, we used a standard that the Florida Solar Energy Center designed, where you bring fresh air right into your plenum. The damper, which is placed in the shade under the eaves, only opens when the air conditioning comes on, and you can tell it seasonally whether to operate or not.”

The builder’s decision to keep the original wood frame runs against the norm in much of Florida—where concrete block construction is typical. But Hardwick notes that this wood was well preserved, because it was properly kept dry. He made sure the upgraded home adhered to the same principal—taking special care to protect wood from water or ground contact.

The original heart pine wood floors also withstood the test of time. After refinishing with water-based sealer, the pine took on a rich, classic tone. In the addition, Hardwick specified Shaws “Epic” hardwood with a waste wood core, and in other rooms he specified tile with recycled content.

The home was one of the first certified under Florida’s WaterStar program, in part because the lot has no permanent irrigation. The home has a simple rainwater harvesting system consisting of four 55-gallon drums, and inside, all of the toilets were dual-flush models, with low-flow faucets and water-saving showerheads in the baths.

Kitchen areas also feature low-flow faucets, along with Energy Star-rated Frigidaire appliances, DuraSupreme cabinets made from fast growing Liptus trees. The countertops from Cambria are made primarily with domestic quartz, so they have a much smaller carbon footprint than imported granite.

“When you’re dealing with a home that was built eons ago, doing the scope of work we did, you really want to start by looking at what you can reuse or redo,” notes Hardwick. “We wanted to showcase the building science principles that we apply to all of our work. And to be honest, that’s why we didn’t go in and use a lot of solar power or hot water—things that are becoming popular right now. We wanted to get all of the basic things right first, the insulation, the durability, the overhangs. And the home, because it’s in an existing neighborhood gets a lot of shading. That would have ruled out most solar features as options.”

Hardwick says he also honed his project management skills on this project. It became key to make sure that every trade contractor knew how his work fit into the bigger picture.

“A lot of times the actual guy on the jobsite is not the person who you spoke to when you hired them for the job. It’s one of the workers, and he may not be on board with whatever building science principle you’re trying to apply. One mistake in the chain of construction can negate the entire system.”

At the same time, he says, the home had to fit in to the relatively dense, existing neighborhood. Fortunately, there are several other duplexes nearby, so he didn’t have to fight planning officials to change the home’s designation from single family to two units.

The neighbors really like it. It got a lot of attention through the parade of homes, and we ended up building a custom home for a client who saw it. But more that the green aspect, I think people who’ve seen it appreciate the quality of the work. We’re very systems oriented, and people are aware of things like humidity that they never were before. So it’s definitely helped us tell our story.” GB