Best-selling author Naomi Klein has linked climate change with inequality in her book This Changes Everything: Capitalism vs. the Climate.

IN THIS CHANGES EVERYTHING, Naomi Klein explains “why the climate crisis challenges us to abandon the core ‘free market’ ideology of our time, restructure the global economy, and remake our political systems.” "Either we change or change will be visited upon us.” 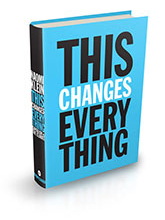 Reality Check. Klein's book pull's no punches, especially on hot topics such as the XL pipeline.

In This Changes Everything, Naomi Klein explains “why the climate crisis challenges us to abandon the core ‘free market’ ideology of our time, restructure the global economy, and remake our political systems.”

Klein meticulously builds the case for how massively reducing greenhouse emissions is our best chance to simultaneously reduce gaping inequalities. Klein, “exposes the ideological desperation of the climate-change deniers, the messianic delusions of the would-be geoengineers, and the tragic defeatism of too many mainstream green initiatives. And she demonstrates precisely why the market has not—and cannot—fix the climate crisis but will instead make things worse, with ever more extreme and ecologically damaging extraction methods, accompanied by rampant disaster capitalism."

”As a lifelong Canadian, Klein laments and thinks of Canada’s “tar sands as the hole at the center of my country.”

This Changes Everything Org

“Either we leap or we sink,” Klein says. The Web site that accompanies her book asks us to, “Forget everything we know about global warming. The really inconvenient truth is not about carbon--it’s about capitalism.” Klein writes, “We have been told the market will save us, when in fact the addiction to profit and growth is digging us in deeper every day. We have been told it’s impossible to get off fossil fuels when we know exactly how to do it -- it just requires breaking every rule in the ‘free market’ playbook: reining in corporate power, rebuilding local economies, and reclaiming our democracies.” Klein says that all around the world, the fight for the next economy is already succeeding in ways both surprising and inspiring. It’s no longer about changing lightbulbs; it’s about changing the world.

Klein argues that our necessary responses should not be viewed as grim penance, but rather as a kind of gift—a catalyst to transform broken economic and cultural priorities and to heal long-festering historical wounds. And she documents the inspiring movements that have already begun this process: communities that are not just refusing to be sites of further fossil fuel extraction but are building the next, regeneration-based economies right now.

The organization that accompanies the book is  This Changes Everything Org.

Below is the YouTube preview for the documentary that will be out soon that accompanies the book.

Amazon link to Naomi Klein’s book, This Changes Everything: Capitalism vs. Climate.

By Christina B. Farnsworth

Rising sea levels will pose a huge risk to affordable housing by 2050. Affordable housing along the...
1 min read
Sponsored Content It’s no overstatement to say that smart irrigation like this should be on the...
2 min read
Why be part of the problem? By making a few changes to your home or condo, you can take giant steps...
5 min read
The Walk offers residents an all-electric, sun-powered lifestyle and wins a Green Builder Home of...
4 min read
COVID has impacted nearly every industry in our economy, with travel and recreation on the top of...
3 min read