In the 1960s The Future described in the 1967 movie The Graduate was "in one word—plastics.” And so it may be again. A disruptive technology—AirCarbon—is creating plastic out of thin air.

Your next chair or plastic packaging may be from AirCarbon plastic.

CBS This Morning reported that Newlight Technologies—another California business started out of a garage—has a viable business that makes plastic from thin air, AirCarbon. 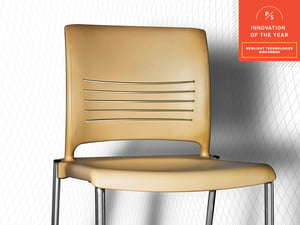 "We would be breathing this right now," Mark Herrema told CBS’ correspondent Ben Tracy, explaining how his raw plastic material hovers like other dust motes in the air.

Herrema started the Costa Mesa company from his parents’ garage and has been working on the technology with partner Kenton Kimmel.

"We're not the first people to have the idea of turning greenhouse gas into plastic," Herrera said to Tracy. "The thing that was missing was that no one had figured out how to do it cost-effectively."

Here is how Newlight describes the process:

“Every day, plants pull carbon out of the air we breathe and use it to make useful materials, like leaves and branches. Imagine if we could do the same.

Inspired by carbon-capturing processes found in nature, Newlight has developed, patented, and commercialized a disruptive carbon capture technology that uses air and greenhouse gas as a resource to produce a plastic material called AirCarbon: a material that can match the performance of oil-based plastics and significantly out-compete on price.

The AirCarbon production process begins with carbon that would otherwise become a part of the air, including air-bound carbon like methane and carbon dioxide generated from farms, water treatment plants, landfills, and energy facilities.

Newhouse captures the plastic and inserts it into “Newlight's polymerization system.” A “biocatalyst—the breakthrough engine behind AirCarbon production process, operating at nearly an order of magnitude higher yield than previous greenhouse gas-to-polymer biocatalysts” separates “carbon and oxygen from an air stream containing greenhouse gas, and then re-assembles those molecules into a long chain PHA-based thermoplastic material called AirCarbon.”

AirCarbon claims it “can significantly out-compete oil-based plastics, such as polypropylene and polyethylene, on price.”

At the end of last year, Furniture manufacturer KI debuted a chair that it will be manufacturing from AirCarbon.

Today most plastics are made exclusively from oil or other fossil fuel derivatives.

In fact, around 4 percent of the world’s oil production is used as feedstock to make plastics, with a similar amount consumed as energy in the process.

AirCarbon plastics are different. They are made from industrial sources of carbon emissions, like those captured by dairy digesters and methane capture, avoiding the use of oil. These carbon emissions would normally become part of the air we breathe, further contributing to climate change."