The idea of creating a low-maintenance, food-creating ecosystem on a home site once seemed quaint. But a perfect storm of impending threats, from oil shortages to hurricanes to out of control food costs—have raised the stakes.

WITH ITS PROMISE OF SELF-SUFFICIENCY, local food production, cultural connectivity and low maintenance, permaculture offers what many in suburbia didn’t know they were missing.

It’s hard not to get dragged down by the news these days. One in six Americans are living in poverty. Home 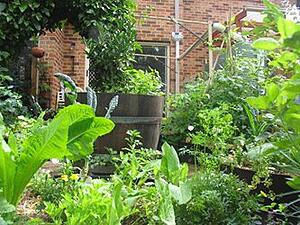 foreclosures have hit record highs. Tax gimmicks ensure that oil companies and banks keep getting richer, the poor get screwed, and the middle class pays for everything. Add to that the triple threat of climate change, a volatile oil supply and rising food prices, and you can see why anxiety has people carrying guns, carrying on, and, in some cases, carried away.

But according to Lisa Fernandes, a permaculture designer and educator in Cape Elizabeth, Maine, there’s another way to address the stress: She calls it resilience.

“A lot of people are not ready to talk about the big issues such as climate change,” she notes, “but with permaculture, you don’t have to. What you’re really doing is organizing on the landscape to withstand shocks, disruptions—whatever the source of those shocks, whether it’s a monster storm or unemployment or something else. Even the EPA has started talking about how to adapt to climate change, rather than simply how to try to stop it. For example, many people are now underwater on their mortgages, trying to figure out how to make ends meet. This is a step in the right direction.”

She adds that talking about sustainability doesn’t accurately capture the depth of the permaculture philosophy. “That word is rapidly losing its meaning. We’re not just trying to sustain what we have. We’re trying to move past a model of simply reducing the amount of damage we do—to actually repairing and improving the landscape. We’re re-organizing how we interact with the earth, so that our needs are met—that’s another conversation—and we can bounce back from whatever the future throws at us.

The term permaculture first arrived in the 1970s, but the ideas it embodies have borrowed from farmers, thinkers and social critics since about the 1920s, not to mention centuries of indigenous knowledge. Some of the tenets of permaculture reflect the writings and teachings of famed architect Christopher Alexander, Fernandes says. His seminal book “A Pattern Language,” turned many of modernisms concepts on their head, and showed how human psychology is impacted by living spaces.

"From the basis of his work, permaculture designers learn to do things like observe the natural pattern of how people and animals want to travel across a property,” she says, “before committing those travel paths to a hard and fast design or to hardscaping.”

That’s how permaculture works, she explains. You find out how people really live—or want to live--then shape the landscape around those patterns.

Moving from traditional landscapes—water-sucking, chemically dependent lawns and non-native shrubs—to edible, medicinal, beautiful plants and functional hardscapes is not simply a retreat into the past, Fernandes says. “We’re not suggesting a return to pre-industrial farming. We’re borrowing from earlier times, yes, but adding advanced technology and decades of plant and soil research to create outdoor spaces that are self-supportive and productive.” 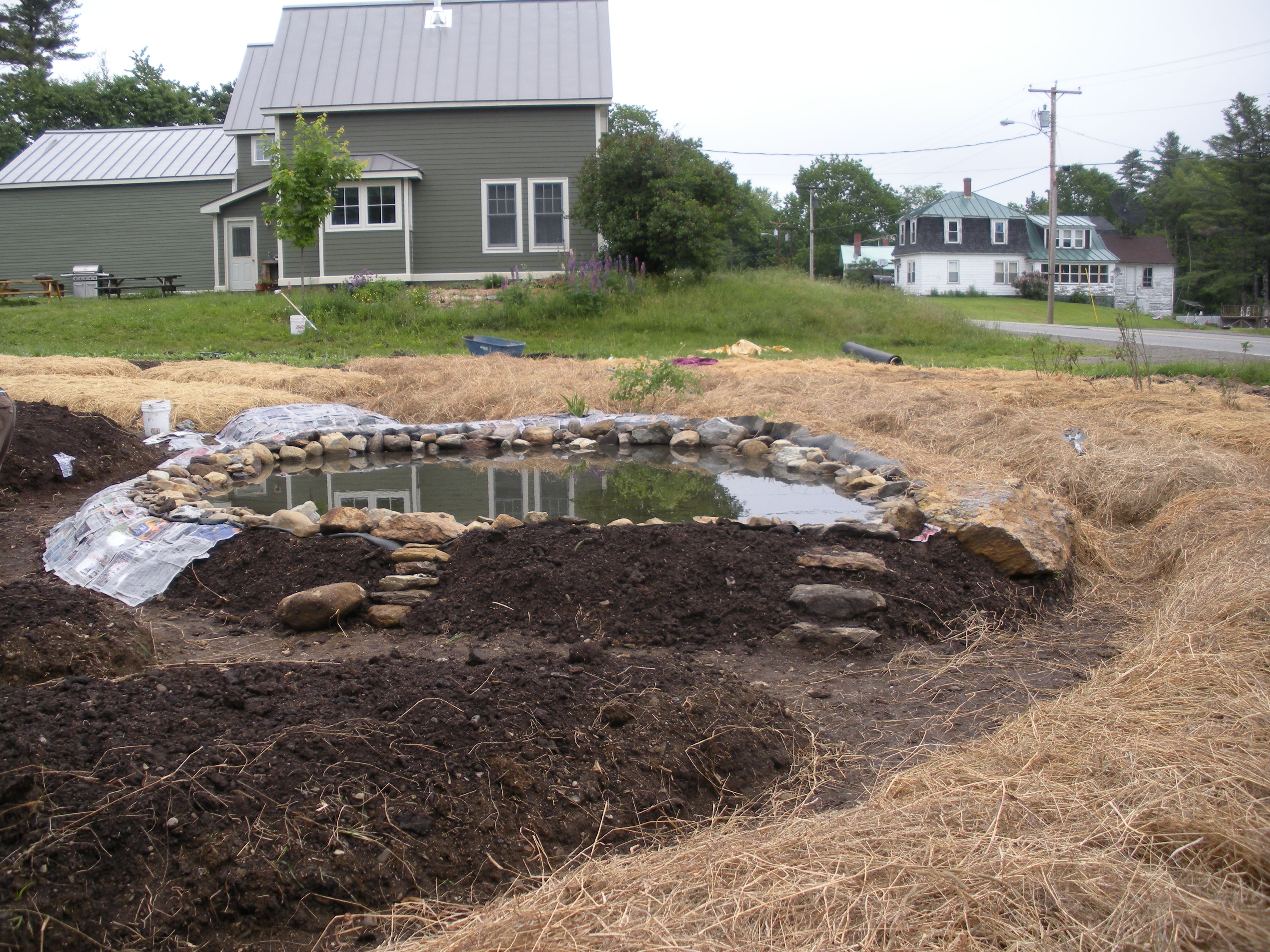 Permaculture as a design approach, she notes, had to earn respectability, in part because it has been seen as a "fringe" or marginal approach. Now, however, would-be permaculturists can take 72-90 hours of training and earn a permaculture design certificate. To date, between 20,000 and 30,000 people have become certified.

That democratizing approach is a key difference between permaculture and other disciplines, Fernandes notes. “These are skills that are meant to be shared, not limited to a small group of experts.”

Some of the design ideas of permaculture challenge modern forms of agriculture. For example, there’s the concept of “no till” planting and soil building that tries to mimic they way healthy soils are created in nature. This is a concept that farmers and gardeners often resist. The science, explored for several years by Australian permaculturist Bill Mollison, suggests that because soils take many, many years to develop their unseen ecosystems, they should not be deeply disturbed with plough and shovel each year. Instead, plants or seeds should be added with minimal disruption.

That’s not to say that creating a permaculture yard is always a low-impact process. But all of the major digging and terraforming happens just once—at the creation of the new landscape. Depending on the site, this process can include removing turf, digging “swales” in hillsides or flat areas, creating raised garden beds, and may include excavating a pond and planting, moving or removing trees. It’s not dainty work, but most of it can be done by hand, often with the help of volunteers. 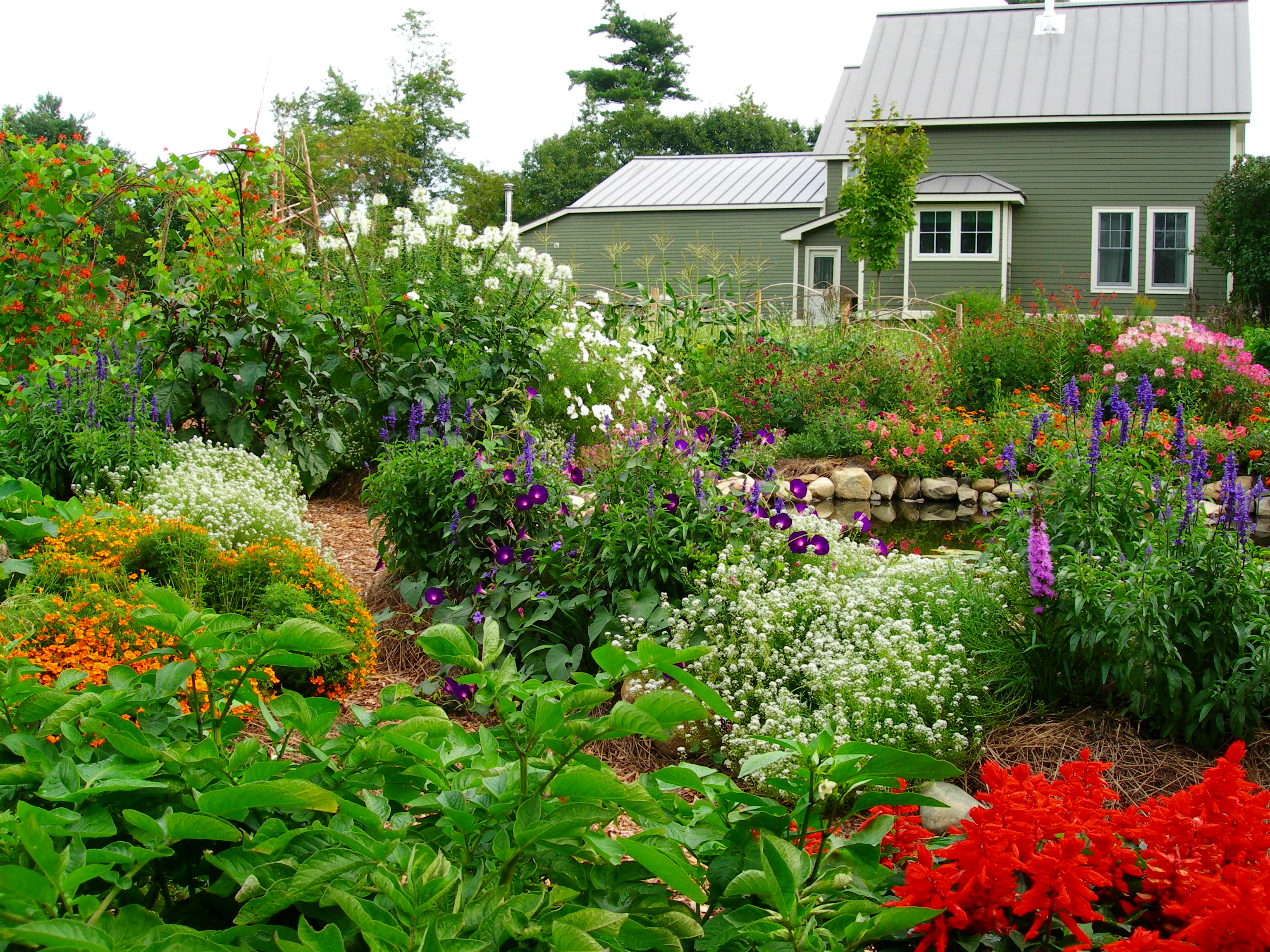 And all of the work is done with clear goals in mind. First, it maximizes the productivity of land. By adding swales—shallow trenches edged by low hills, for example, you can almost double the surface area for growing—stretching a third of an acre into a half acre. At the same time, swales create microclimates, protected areas that receive more (or less) sun than flat areas, suitable for crops that might not otherwise grow in a given climate zone.

Another way to maximize growing space is to go vertical.

“If you have a south face on a home,” Fernandes says, “and you’re not creating some kind of vertical trellising system for grapes or plums or some other crop, you’re wasting a lot of potential. Also, you want to maximize edge. In nature, it’s at the edges that the most productive stuff happens: the transition between forest and field, marsh and river.”

One way to do that: use scalloped borders on walkways and beds, and gently curving ponds. A straight line has the shortest amount of edge--so it’s the least akin to anything found in nature, and the least productive, especially if growing food is a goal.

Which raises another key “permie” value. Permaculture landscapes support life and give something back—unlike conventional yards that often demand more than they give. In other words, every plant on the property has a role in an ecosystem that must includes the residents of the house. That means people-ready food: hardy perennial fruit trees and vegetables (such as asparagus, garlic, kale and rhubarb), herbs, medicinals, and tall or bushy plants for privacy screens. Not all plants are edible of course. Some are intended to build and revitalize soils or attract beneficial insects, birds or other creatures. Beauty isn’t the primary goal, simply an inevitable result.

“One thing people need to understand is that a permaculture landscape might not look impressive for the first three to six years,” says Fernandes. “It’s not like an ornamental landscape where the landscapers come and plop plants in holes the day the house is finished. But when those plantings mature, it’s a garden of Eden—a unique experience like nothing most people have ever seen.”

“With this type of land planning,” she adds, “most of the hard work is done up front. After that, it’s close to self maintaining.”

Experiments in permaculture have achieved some astounding results—which seem to bear out much of the ecological science of the practice. For example. Geoff Lawton has been demonstrating that even desert landscapes can be made fruitful by applying certain permaculture principles.

But people who have converted their residential lots need little convincing. How much can edible stuff can a half-acre city lot really produce? A family in Pasadena says it’s producing over 6000 lbs. of produce a year on just 1/10th of an acre—a figure that includes poultry and eggs - using permaculture among other strategies. A more realistic goal for committed gardeners might be 600 to 1,000 lbs annually on a half-acre lot.

Permaculturists in urban areas are not waiting around for city officials to figure out the benefits of urban farming. For example, the San Francisco permaculture group (www.permaculture-sf.org) calculated how much food could be grown on the city’s unpaved, permeable areas—a total of about 9,000 acres that does not include rooftops or parking lots. Based on the Pasadena project just mentioned, they came up with a rather zealous estimate of 70,000 lbs per acre. They then weighed in average calorie consumption for a human being, to estimate that the city could produce enough food to feed 78,408 people per year. San Francisco’s current population: about 800,000.

Their conclusion: Even permaculture doesn’t have the potential to feed a modern city from within the city limits—unless major infrastructure dismantling takes place. But the alternative—total dependence on remote food sources, offers nothing but bad news. And, most people will choose hope over helplessness.

That may be permaculture’s most important attribute: its promise of an abundant future, where people can survive whatever changes are coming. It’s a system that’s open to all, that offers security through local collaboration, not guns and private gates. To that end, Lisa Fernandes says, it’s time to take resilience to the next level.

“We mustn’t forget the huge advantages we have in the United States,” she says. “We have such a resource here in our already built environment. We have everything we need—if we can just learn to capture and use all of the resources that are hitting our home sites—the water, the solar energy, the soils.”

Along with permaculture, she says, people need to prepare mentally for the future, by re-localizing where and how they get their energy security and essential goods, and re-skilling (learning how to use their hands again) to be able to grow and preserve food, compost, capture rainfall, and make and repair clothes and household goods.

She acknowledges that most people still have a long, long way to go. But your own homesite is a good place to start.

“Installing a permaculture design typically costs about the same or less as conventional landscaping,” she says. “But once it’s done, the savings in maintenance—not to mention the production of valuable, usable food and herbs quickly begin to pay off. It’s not going to be neat and tidy and manicured like a lawn and a picket fence, but this is about caring for the earth, at the same time caring about yourself.”