Data collected from residential Phyn Plus leak detection systems reveal as much about state-of-mind as behavior.

Water is an incredibly important natural resource in our daily lives. From making our first cup of coffee in the morning to washing our clothes, cooking our dinner, and then brushing our teeth before we go to sleep, we all use water throughout the day without even thinking about it. Taking a close look at our water consumption and habits during this pandemic, and the changes that have come as a result, offers a unique and detailed picture of our lives under quarantine.

Looking at water usage from a sampling of 2,000 homes across the country with Phyn’s best-in-class connected water monitoring and leak detection products, the company has identified a number of trends and shifts in habits around water usage, including that the average U.S. household is using 21% more water daily in April compared to February and the pre-COVID stay at home orders. This equates to nearly 729 additional gallons being used by the average home in the month of April. 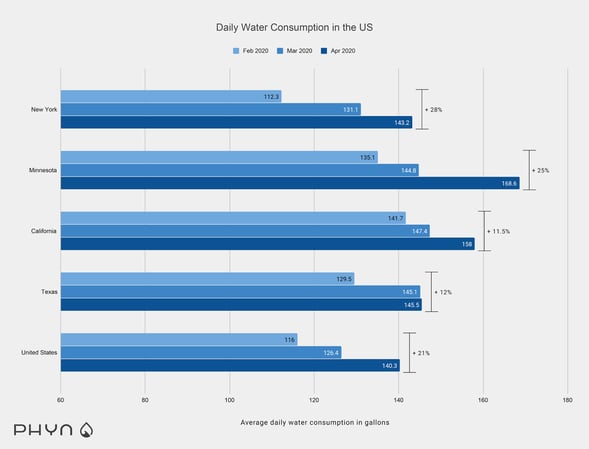 Daily Water Consumption on the Rise

Since the pandemic began, the single-family households that Phyn has measured have increased their daily water consumption by an average of 21%, or 24.3 gallons per day, compared from February to April. If every one of the 95 million single-family homes in the nation follows this trend, that is nearly 2.5 billion additional gallons of water being consumed, every day, in the U.S.

Of this 24.3 gallons per day increase in water use, 21% can be attributed to more sink use, followed closely by 20% more toilet use, 16% more shower use and 3% more washing machine use.

Families Starting their Day Later, Highest Increase is at Lunchtime

Water consumption patterns are following other notable trends of the new normal “Stay at Home” life. Families are getting their day started later, with peak morning consumption shifting two hours later to 9:00 AM from 7:00 AM. While the day is clearly starting later, there have been no significant changes to the end of the day which is wrapping up about the same time as before.

And comparing pre-COVID-19 to current residential usage patterns, it is clear that the highest increase in water usage is happening in the afternoon as stay at home schoolers and workers are taking a break, getting up to use the restroom, washing their hands and prepping meals.

The average household visited their sinks nearly 50 times per day in April, an increase of 10 more visits a day than in February. While not all of these sink-uses can be attributed to increased handwashing, the data shows that families are now making more quick trips to the sink, 0-15 seconds in duration, 27 times per day (up from 22 in February). Slightly longer trips, within CDC guidelines for handwashing at 15-25 seconds, are occurring 13 times per day, up from 11 in February. 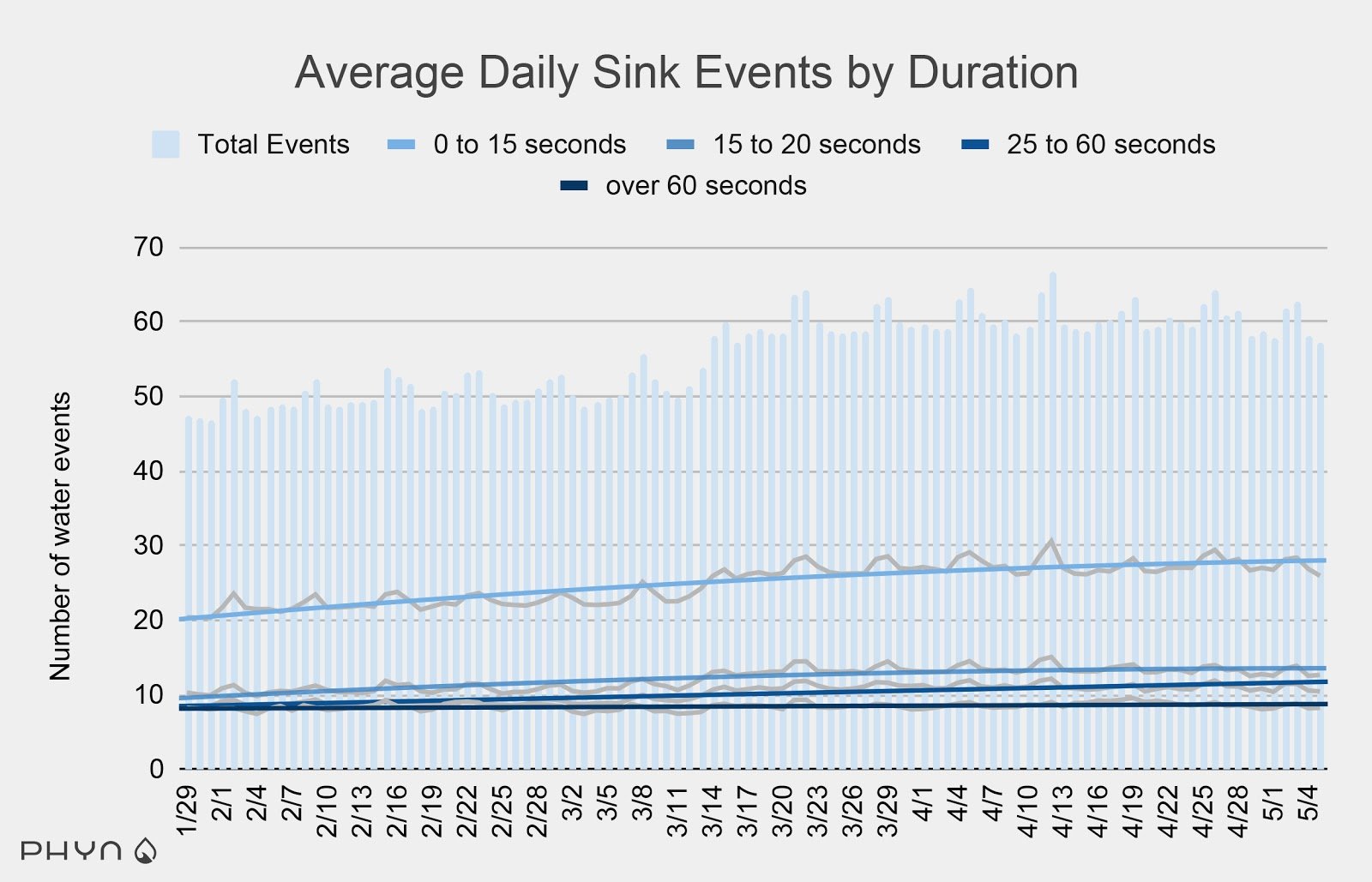 All Aboard the Toilet Paper Train

Americans on average are using the bathroom at home three times more each day in April than they did in February. In comparison, New Yorkers are flushing the toilet 5 times more per day than before the stay at home orders were put into place.  (Note: Bidet installation and conversion would solve toilet paper anxiety once and for all--Editor)

Across the country, people on average are also showering almost three more times per week than they did pre-COVID-19. In addition to the increase in the number of showers, the time of day when people are showering has also changed, further reflecting a later start to their day. In April, midday and evening showers increased while morning showers shifted later in the day.

Methodology: Note, this is a randomly-selected sample of 2,000 single-family residential homes across the U.S. with Phyn Plus devices installed. Data set is from February 1 - April 30, 2020.

Phyn is the leading intelligent water brand, bringing solutions to market that help people protect their homes, conserve water and save money. Built upon nearly a decade of research and patented technological innovation, Phyn is poised to change the way consumers interact with water and help solve the major challenges threatening the world’s supply of clean, healthy water. Phyn has been widely recognized for its innovation, including honors from the Red Dot Awards, SXSW Innovation Awards, Core 77 Design Awards, IoT World Awards, CES Innovation Awards and GreenBuilder’s Sustainability Awards among others. Phyn is backed by Belkin International, a global leader in consumer technology, Networking, Smart Home and Smart City, and Uponor, a leading provider of plumbing for residential and commercial spaces worldwide with North American headquarters located in Apple Valley, Minn. The parent company Uponor Corporation is listed on Nasdaq Helsinki, Finland. Phyn is headquartered in Torrance, Calif. To learn more, visit www.phyn.com.