Modern life is raucous in the best of times, but the ones we’re experiencing now would hardly qualify for high ratings.  Day and night, we’re bombarded with images and descriptions of conflict and suffering.  In fact, it’s hard to remember when the world has felt so unstable, so chaotic, so noisy.  The future, it seems, has seldom been more uncertain.

In my experience, nature has ways of letting us know when something is not right, that something is out of balance.  We’re seeing it in the form of a viral pandemic that’s ravaging our species, in blood and broken glass on our streets, teargas in our parks, smoke from burning buildings in our cities, in the despair that comes from decade upon decade of economic hardship and social inequity, and in the collapse of micro-environments and ecosystems around the globe.

I’m not afraid to state aloud that some of this imbalance rests squarely on the shoulders of our elected leadership, on many levels and in many places.  But that actually concerns me less than the part of this situation that I attribute to everyday people, like you and me.  We witness its manifestation in the faces and voices of our fellow citizens who loudly demand their personal freedoms while expressing little or no regard for those around them.

Some people are quick to let us know that they don’t want to be told what to do.  However, I usually don’t hear them speaking up about what they’re doing for the common good, how they may be helping to ease the pain for anyone else. 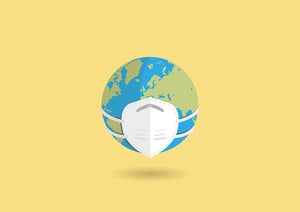 In a recent meeting of the local elected leaders of our tiny hamlet, a vote was taken to determine whether everyone over a certain age should be required to wear a face mask in public places.  The measure was adopted by more than a two to one margin but there was dissension.  One of those who voted against the measure claimed to not believe in masks.

Everyone is entitled to their beliefs and opinions. But all the noisy conflicts around these details distract us from much larger ideals.

Those personal freedoms that folks are so eager to declare inviolate exist in a harmonic balance with something else, personal responsibility.  One does not occur without the other.  They are interdependent.

Individual rights and personal freedoms are the sweet fruits of our chosen system of governance but they are harvested at a cost. The precious gift of living in a free society didn’t magically appear from elsewhere in the universe wrapped in a bow by a benevolent sender. Take a walk through any National Cemetery on a quiet morning and read the names of strangers who did their parts, however large or small, to square the common account.

The cornerstone of this fragile arrangement, this thing we call democracy, is in keeping faith with a simple principle, namely that we will honor majority rule.  That doesn’t mean we have to like the fact that we are legally required to fasten our seatbelts when preparing for takeoff, or that we have to enjoy stopping at all red lights.

It doesn’t mean that we need to believe in masks in order to be willing to wear one if that is what the majority of decision makers deem the best for everyone.

Yes, we’re free to make noise but only if we’re also willing to be quiet and listen.

Image by cromaconceptovisual from Pixabay