Upgrading to a New Appliance is Often the Greenest Choice

I'm often asked whether replacing an appliance is worth the cost--both in real dollars and in potential reductions in environmental impacts. The answer is yes to both.

According to the report, Better Appliances: An Analysis of Performance, Features, and Price as Efficiency (link below) released today by the American Council for an Energy-Efficient Economy (ACEEE) and the Appliance Standards Awareness Project (ASAP). In many cases, product prices have stayed the same or even declined as efficiency has improved. In other cases, electricity bill savings outweigh price increases. 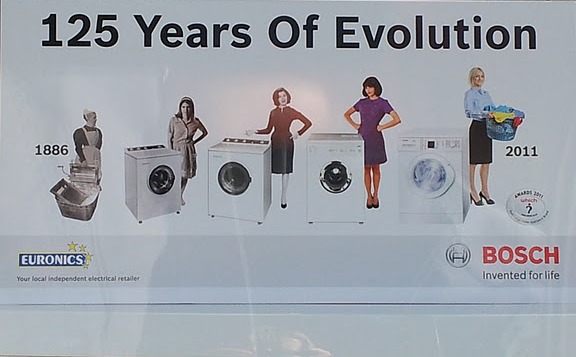 Evolving Performance As this Bosch ad suggests, the washing machine of yesteryear has seen steady improvement was to remove the blubber.

"Everyone knows that replacing your old appliance with a new, more efficient model will save you money on your utility bills," said Steven Nadel, ACEEE executive director. "What this report shows is that consumers haven't had to sacrifice good performance or new features in exchange for improved efficiency."

"Many of us tend to be nostalgic about the past, but what this report shows is that your parents' appliances not only cost more to run, but probably didn't perform as well either," said Andrew deLaski, ASAP executive director.

National efficiency standards for appliances, equipment, and lighting products have delivered big savings for consumers. The report found that a household with six products (refrigerator, clothes washer & dryer, dishwasher, central air conditioner, and toilets) that just meet the current efficiency standards will save $360 on annual utility bills compared to a household with the same products purchased 20 years ago.

However, until now, little work had been done to examine changes in other product attributes as efficiency has improved. For this report, ACEEE and ASAP analyzed how the choices available to consumers have changed over time as efficiency standards have taken effect for ten residential and commercial products. The report compared the performance, features, and price of products available before and after each standard was implemented.

The report found that product performance generally stayed the same or improved as efficiency standards took effect. Refrigerator temperature performance has improved and noise levels have dropped over time. Manufacturers have maintained good dishwasher performance even as energy and water use have decreased substantially. And incandescent light bulbs that meet new efficiency standards provide the same light output, lifetime, color quality, and dimmability as bulbs that were available before standards took effect.

"Overall, efficiency standards have been a win-win for consumers," said Mel Hall-Crawford, energy projects director at Consumer Federation of America. "Improved efficiency has added up to consumer pocketbook savings, and at the same time, consumers are getting products that deliver equal or better performance."

According to the report, manufacturers introduced and expanded the availability of new features as efficiency standards took effect. For example, consumers now have a significantly wider range of options in bottom-freezer refrigerators including French-door models, and new features include new types of water dispensers, in-the-door ice makers, and additional compartments. The availability of clothes washers with large tub capacities has increased dramatically, and new features include electronic controls and displays, steam cycles, and automatic dispensers.

The report also found that product prices declined or stayed the same as efficiency standards took effect for five products. For example, the average price of a refrigerator (in 2011 dollars) declined from $1,300 in 1987 to $850 in 2010, or a decrease of 35%. Clothes washers and dishwashers have seen similar price declines---45% and 30%, respectively. For the other products analyzed in the report, price increases were outweighed by electricity bill savings.

"From light bulbs to refrigerators to air conditioners, today's products save energy and money while delivering performance that equals or beats the products they replaced," said Joanna Mauer, ASAP senior researcher and lead author of the report. "In addition, consumers can choose from new features that were not even available in the old, inefficient versions."

About ACEEE: The American Council for an Energy-Efficient Economy acts as a catalyst to advance energy efficiency policies, programs, technologies, investments, and behaviors. For information about ACEEE and its programs, publications, and conferences, visit aceee.org.

About ASAP: The Appliance Standards Awareness Project is dedicated to increasing awareness of and support for cost-effective appliance and equipment efficiency standards. Founded in 1999, ASAP is led by a steering committee that includes representatives from energy efficiency organizations, the environmental community, consumer groups, utilities, and state government. See appliance-standards.org/.