The Dirt on Ecological Restoration

We used to walk in the parks and ravines that we thought were simply well-preserved landscapes in the Illinois Forest Preserves and Lake Michigan Lakefront. Then one day we stumbled upon a small plaque that explained that what we thought was a natural preserve was really a mix of landscape preservation and park space designed by famed father of American Landscape Architecture Frederick Law Olmstead. We were no longer sure that the plants we loved were even native to that very beautiful environment.

It makes one wonder whether future career paths can be determined by a walk through a park you didn’t know was one. And that is why an article in the October 14 issue of The Dirt, published by the American Society of Landscape Architects (ASLA) was so intriguing. 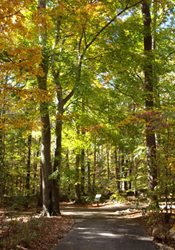 Green reports that in a session at the Society for Ecological Restoration (SER) conference in Madison, Wisc., October 6–11, Rutgers ecologist and professor Steven N. Handel gathered the two groups to discuss why collaboration is vital. Some 1,200 professionals from all over the globe attended the conference.

Makes perfect sense, when one considers many of the environments now thought of as natural places are really restorations, though often imperfect restorations. Think of the Vermont woods restored after Colonial-era deforestation and generations of farming by Frederick H. Billings.

In 1869, Billings purchased George Perkin Marsh’s former estate. Marsh, author of Man and Nature was among the first to write about the effects of damaging the environment. Man and Nature posited that Mediterranean civilizations had collapsed because of environmental degradation. What started with Billings’ acquisition of Marsh estate is now the Marsh-Billings-Rockefeller National Historical Park, 550 acres claimed to be the oldest restored forest in the United States.

The conference suggested collaboration among the architects and ecologists because they agreed that the landscape architects communicate well with clients and communities. The ecologists are critical to making the authentic and historically accurate wildlife habitats that form sustainable landscapes. One might wonder how different the ecology of the Vermont park is from its ancient forest heritage since Billings’ restoration used many trees not native to the original landscape or even the United States, such as European Larch, Norway Spruce, and Scots Pine.

Even our most-visited National Park, The Great Smoky Mountains National Park is not what it was. Ken Burns documentary tells the story of how the creation of the park was a race against time. As school children raised money, loggers cut old-growth forests. The park’s museum shows that the trees were wider in diameter than men are tall. Now about 522 acres, only 25 percent of the old growth forest remains.

Why was preserving the Smoky’s important? It was an environment that survived the glaciers. It is an environment older than the dinosaurs with more kinds of trees than the continent of Europe. Some plant species are among the oldest on earth, and the bio-diversity is high with estimates of 100,000 kinds of life forms from bugs to bears. Dedicated in 1940 and now also an International Biosphere Preserve and a Unesco World Heritage site, many acres of what people think of as old growth forests are not that at all—they are merely 75 years old.

Rutgers University ecologist Christina Kaunzinger said at the conference that in restoring a landscape, ecologists can look at habitats and see what’s possible, what interventions are needed and what natural ecological methods can be used. In those same landscapes, the architects design access that “integrates people with those places” and create approaches that “sustainably manage resources.”

Kaunzinger worked on the Piedmont Forest Restoration at Fernbank Museum of Natural History in Atlanta. The forest is a 65-acre remnant oak, hickory, and pine forest with no “soil disturbances” located in Atlanta. Kaunzinger said there was a lot of decaying wood, great for biodiversity, and that stream heads are intact. A prime concern is invasive species from a nearby residential area. A planned elevated walkway will allow visitors to enjoy the forest without harming it.

Another Atlanta project on which landscape architect Susan Stainback is working is the Peachtree Restoration Greenway. “People,” she says, “have to have access to nature to care.” Landscape architects, ecologist, and other scientists are working to help Atlanta rediscover the 30-mile creek. Many view the neglected creek as dangerous when it is really “a beautiful riparian system” hidden in plain sight. A segment between Emory University and Buckhead will be the first restored section opened. The landscape architects are creating an implementable master plan, which will include trails and control of stormwater runoff with green infrastructure systems.

And what can all of this mean? There is a wonderful, must listen to, TED Talk from July 2013 in which English environmental-writer George Monbiot explains the positive environmental changes brought about by the re-introduction of the wolf into Yellowstone Park. Sure, he says, the wolves killed and ate some deer, but their introduction brought life—both plant life and wildlife—and even changed the shape and the behavior of the rivers. Monbiot speaks of “Silent Spring being replaced by a raucous summer.”

Last summer, Monbiot published Feral: Rewilding the Land, the Sea, and Human Life. He writes that by restoring and rewilding damaged ecosystems, we can bring wonder back into our lives by letting nature find its own way.

For more on this topic, visit Global Possibilities.