By reducing problems to their most fundamental elements, SpaceX, Tesla, and SolarCity founder Elon Musk is able to create revolutionary solutions.

Elon Musk thinks differently than most people do. Rather than applying logic to issues derived from and compounded upon existing reasoning, Musk reduces issues to their essential core, and then develops new intelligence based on the fundamentals of pure reason.

Musk learned this ‘First Principle’ methodology from the field of applied physics. A First Principle is a basic assumption that stands completely on its own and cannot be deduced from any other proposition or assumption. Think of a first principle as a prime number, which has no positive divisors other than 1 and itself.

"The normal way we conduct our lives is we reason by analogy," says Musk. Unlike first principles thinking, analogy leads us to do something because it has been done before or is the prevailing way of doing things (for example, analogy would steer us to continue using fossil fuels and incandescent light bulbs.)

In contrast, when applying first principles thinking, “you boil things down to the most fundamental truths … and then reason up from there," Musk says. By applying the concept of first principles to some of the most complex issues of our time—energy, space travel, and transportation—Musk has developed elegant, intelligent, and scalable solutions that are profoundly altering our economy. 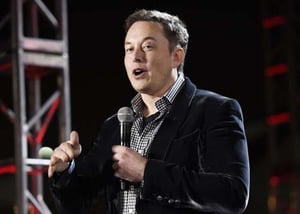 Musk readily admits that reasoning with a first principles approach “takes a lot more mental energy,” but the results are undeniable: first, he reinvented payment transactions with PayPal, then he tackled private space travel with SpaceX, electric vehicles and battery storage with Tesla, and creative solar system installation and financing solutions with SolarCity.

In a statement to Tesla shareholders last week, Musk epitomized first principles thinking: “We have this handy fusion reactor in the sky called the sun,” he said. “You don’t have to do anything, it just works—shows up every day and produces ridiculous amounts of power.” However, despite the sun’s myriad virtues, it does, irrefutably, go away at night, necessitating a solution to store its plentiful power.

So, Musk did what he does best and applied first principle thinking to come up with a sleek, affordable solution that overcomes the general drawbacks and failures of existing batteries, which, according to the entrepreneur, “suck… are really horrible… and are sort of stinky, ugly, and bad in every way.” Enter (stage right) Tesla Energy, Musk’s new battery business…

By designing a solution based on need rather than products that were available in the market, SpaceX was able to build a rocket for approximately 2% of the prevailing cost. Similarly, Musk dissected the elements of lithium ion battery packs and, when he redesigned them his way, he was able to reduce costs by an order of magnitude.

Not only was he able to dramatically reduce production costs, but he will also establish unprecedented economies of scale with his Gigafactory in Nevada. By churning out batteries and radically increasing supply, this Gigafactory is expected to create up to a 50% decrease in the cost of battery storage systems over the next 2-3 years.

Tesla Energy will manufacturer the Powerwall and the Powerpack batteries for homes, businesses and utilities, which will, Musk says, “fundamentally change the way the world uses energy. We’re talking at the terawatt scale. The goal is complete transformation of the entire energy infrastructure of the world.” In other words, it’s galactic.

The home battery, Powerwall, comes in 7 kilowatt-hour and 10 kilowatt-hour versions with an entry-level price of $3,000. With a prepayment of $5,000, customers can secure a nine-year lease on a 10 kilowatt-hour system, or they can buy the entire system for $7,140 (prices reportedly include installation, a maintenance agreement, the electrical inverter and control systems.)

The Powerpack is the larger version for business use, with an entry cost of about $25,000. Companies such as Walmart and Cargill have already installed the Powerpack, and reportedly Target and Amazon, among others, have near-term plans to do so as well.

The batteries are designed for two main functions—first, to store solar energy during the day and release it at night when the sun isn’t shining, and second, to enable load-shifting by charging during times when electricity prices are at their lowest (like at night), and discharging energy when demand—and therefore prices—are high.

Ultimately, the Powerwall and Powerpack have the potential to fundamentally change our relationships with utilities, enabling users not just to utilize renewable energy and mitigate energy costs (the units are expected to help save customers up to 25% on electric bills), but also to generate revenue by selling power either back to the utility or to other users. Essentially, the technology, designed to enable remote-aggregated control of solar battery systems, is a game changer for anyone who generates or uses power.

The Future of Tesla Energy

And, just one week after the announcement, the verdict is clear about the future of Tesla Energy—the company has already booked $800 million in reservations. The majority of those reservations were for Powerpack commercial applications (granted, not all of these reservations will translate into sales, but if they did, capacity would apparently be maxed until the middle of 2016.)

Musk’s literal and figurative rocket ride is thrilling to watch. And while the entrepreneur is, no doubt, reaping tremendous financial gain, we are the real beneficiaries of his radical thinking—you, me, and every person who stands to profit from reduced energy costs, decreased pollution, and cleaner air.

Through innovative, first principles thinking, Musk and his team have developed a key that is unlocking the fortress of inefficient fossil fuel infrastructure—as essential development considering that our national grid is becoming more unreliable as it continues to age. And don’t expect for this innovation to be Musk’s last—he continues to search his crystal ball for solutions that will deliver us to a sustainable future.

What major issue do you think Musk, or another genius entrepreneur, should tackle next? Write to me at sara.gutterman@greenbuildermedia.com or follow me on Twitter or Facebook.