These tips will help you design a landscape that feeds the many creatures that rely on flower pollen.

Pollinators are a crucial component of an ecosystem and are instrumental in the reproduction of over 85 percent of the world’s flowering plants and two-thirds of the world’s crop species. A diverse group fulfills this important work, including bats, bees, birds, flies, moths, wasps, butterflies and beetles, many of which are in rapid decline. A decade ago, beekeepers in the United States and abroad started noticing concerning drops in honeybee populations. 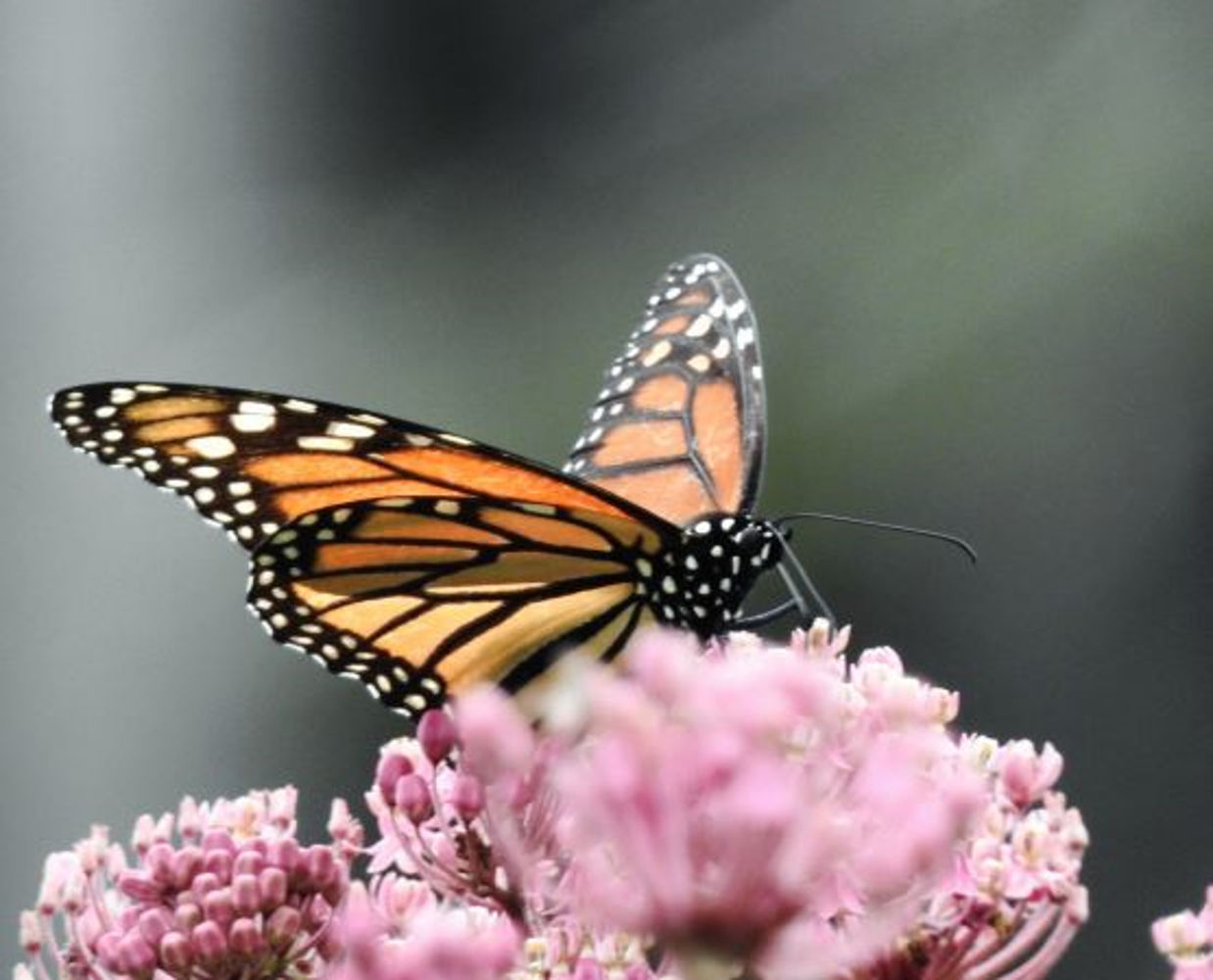 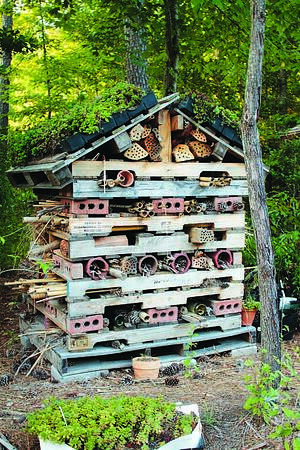 This “insect condo” takes advantage of free or low-cost materials to provide niches for nesting bees and other creatures. Photo credit: Gayle Trautman

“Typically beekeepers lost 15 percent of their hives each year, from winter starvation and a variety of factors,” says Eric Lee-Mader, pollinator conservation co-director for the Xerces Society for Invertebrate Conservation. “Around 2004 and 2005, beekeepers began to lose 30, 40 or even 50 percent of the hive population. There has been a struggle to figure out what is going on. There are probably multiple stress factors: parasites, persistent pesticides and habitat loss, working together to create a broad landscape that is inhospitable.”

Although the decline in honeybee populations has a concerning economic impact, it may be indicative of a larger issue. Because honeybee populations are managed, population losses are more quantifiable, while declines and even extinctions of native pollinators are less obvious, but of great importance. Native pollinators provide essential agricultural services, estimated at $3 billion annually in the United States.

“We have a tremendous diversity of wild bee populations, with about 4,000 species that are truly native to North America, such as leafcutter bees, bumble bees and mining bees—that have evolved in North America and are highly adapted to native crops,” says Lee-Mader. “Honeybees are not going extinct, but we do have native bee extinctions that are taking place right here in the United States. There are a couple of new conservation status reviews that estimate that about one-third of 50 native bee species are extinct. The rusty-patched bumble bee, for example, was once very common and could go extinct in 2015.”

The Role of Created Landscapes 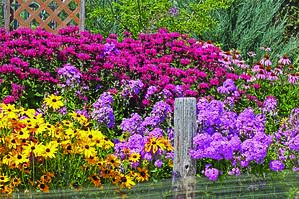 Planting clusters of colorful blooming flowers will attract a range of pollinators. Be sure to plant varieties that bloom at the beginning and end of the season, too. Photo credit: USFWS

With pesticide use, habitat loss and the introduction of diseases as the main culprits, landscapers have a valuable opportunity to protect pollinators. Lee-Mader recommends avoiding the use of insecticides by designing landscapes that aren’t dependent on a cosmetic standard that requires such chemicals and using locally native and appropriate non-native flowering plants to create a cascade of blooms throughout each season. Any landscape, regardless of size, can provide essential resources for bees.

When designing landscapes, keep in mind these tips from the United States Forest Service for attracting and encouraging pollinator populations.

Avoid hybrid flowers, especially “double” flowers. In the interest of creating the perfect bloom, plant breeders often sacrifice the pollen, nectar and fragrance, which are essential for pollinators. 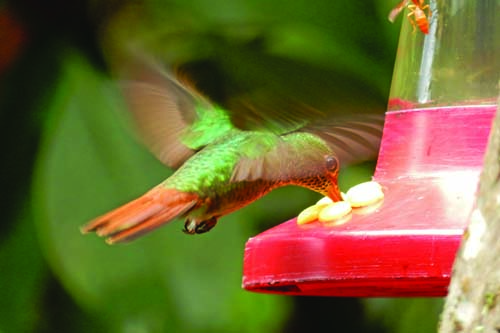 Increase visibility. Plant in groups or drifts, rather than as single plants, to help pollinators locate blooms, and plant a variety of colors to attract diverse pollinators.

Provide larval hosts. To host colorful butterflies, cultivate plants for their caterpillars to feed on. Some species will only be attracted to one or two plant species. Attract monarchs with milkweed, or spicebush swallowtails with sassafras, prickly ash or spicebush. Some larval host plants are not ornamental, and they may experience leaf damage, an indication they are providing benefit.

Create a salt lick for bees and butterflies. Provide damp soil with a drip hose or birdbath on bare soil and mix sea salt or wood ash into the mud.

Select pollinator-friendly native plants. Research shows that native plants are four times more attractive than non-native plants to pollinators. In addition, these plants typically require less maintenance, as they are ideally suited to the given environment.

Leave dead wood for nesting. Provide dead trees or even a dead limb for nesting sites for native bees. Otherwise, drill holes ranging from three to five inches deep on scrap lumber mounted on a post or on eaves.

Add a nectar source with a hummingbird feeder. Make artificial nectar by mixing four parts water with one part table sugar—never use artificial sweeteners, juice or honey. Dissolve sugar and allow to dry before placing in a red feeder.

Cultivate pollen and nectar sources from early spring through late fall. Plant a wide variety of perennials and annuals, shrubs and trees with various flower shapes and sizes. In addition, cultivate night-blooming flowers to support moth and bat populations.

Bring knowledge to your team. Whenever possible, work with landscape architects and gardeners who are knowledgeable about attracting pollinators. 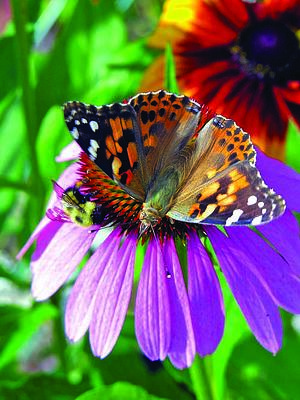 Because they’re in decline, bees and their importance as pollinators have been getting much-needed press in recent years. However, a vast array of species provide this valuable ecological service.

Bats. After dark, these creatures often pollinate flowers that open at night. They play an important role, especially in desert and tropical climates.

Beetles. These pollinators are largely attracted to ancient species such as magnolias and spicebush.

Butterflies. Active during the day as they seek nectar, butterflies are less efficient than bees in moving pollen.

Moths. Along with bats, moths seek nocturnal flowers that are commonly fragrant with light-colored flowers.

Wasps. Because they are not covered with fuzzy hairs, wasps are less efficient pollinators than bees; however, these insects play an important role. For example, fig wasps pollinate over 1,000 species of figs.