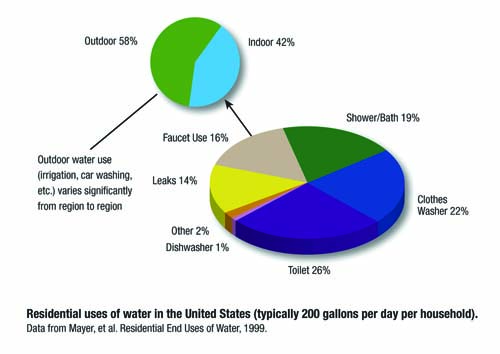 GREYWATER IS WATER from sinks, showers and washing machines, that can be captured and reused for irrigation. Greywater systems can potentially save up to 80 percent of household for reuse.

Several states technically allow greywater reuse and have code structures in place; however, codes vary from state to state, and some are more restrictive and complicated than others. Advocates point to Arizona’s greywater code, with its tiered approach, as the standard. Residential systems under 400 gallons don’t even require a permit, so long as they adhere to a list of conditions, and the greywater is used only for irrigation of non-edible landscaping. Even in states with greywater codes, some people bypass the complicated permitting process (and the fees that go along with them) in favor of “bootlegged” systems.

Hopefully, with increasing and prolonged droughts and the rising costs of moving, storing and treating water, more states will embrace greywater reuse as a valuable tool for conserving water, and make the process easier for builders and homeowners alike. Greywater Action is a good source of information about greywater use, including codes. www.greywateraction.org