It was the late 19th century when the world saw the invention of both incandescent and fluorescent light bulbs. Humanity’s first artificial light had finally been created with help from newly available electric power. And artificial light in homes used a great deal of that power! There were no appliances in homes yet. There were no radios, hair dryers, air conditioners or TVs. The future had arrived, but not much of it yet.

You remember the future, don’t you? We were supposed to have flying cars, refrigerators that shopped for our groceries and pneumatic tubes that propelled us into the middle of mile-high city buildings. We’ve been teased with ideas of self-tying shoes and hover boards. I’m still waiting for my robot maid.

It wasn’t too much later that LED was finally invented in the late 1920s. While the simple incandescent bulb took hold of the marketplace, fluorescent lighting eventually found a niche when the world wanted efficient office lighting a few decades later. And until just a few years ago, the desire and technology for LED light sources had never materialized beyond iconic calculators and digital watches of the 70s.

There are plenty of items that have been invented in the interim. We’ve seen the future before in our hands with Betamax, Kodak Instant Cameras, Smell-O-Vision, iPod, Laserdisc, pagers and car phones.

It was California’s update in 2013 to its Title 24 Building Codes that finally propelled LED lighting manufacturers into full gear. The technology had been available but it was still expensive just a few years ago. Despite high-energy costs and conservation efforts, it was unlikely that the public was going to accept a $100 light bulb no matter how much electricity it saved the buyer. Manufacturers avoided investments into production until California guaranteed a significant flow of customers. They found those customers in the people who were financing new homes with 30-year mortgages … the added cost for any required LED products under new Title 24 regulations ($11 per month higher mortgage payment) was offset directly by lower energy bills ($27 monthly savings). You can find full information about Title 24 at the UC Davis California Lighting Technology Center website https://cltc.ucdavis.edu/.

With that additional impetus, the marketplace exploded for LED products of every size and shape, with increasingly affordable prices. Affordable LED products have now flooded stores and the technology has become more efficient, brighter and available in a plethora of choices.  Until last year, my one remaining 150W incandescent bulb used the same energy as every other light source in my home combined! And finally just this year comparably bright LED bulbs dropped in price enough to motivate me to replace that last bulb as well. 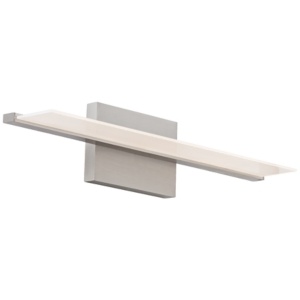 Lighting designers have been in a fervor using the new technology to conjure up a mind-blowing assortment of new, never-before-possible fixtures to light our homes. From flat panels to bouquets of lighted spiral stems, from glowing sticks to pinpoints of efficient illumination, we have the future in our hands again. And it’s all energy efficient so the future is bright, right?

We’ll get back to the future in a minute.  But where are we now?

The science is still advancing and adapting to the marketplace. I spoke with Chris Primous, the U.S. representative of bulb manufacturer MaxLite recently about today’s LED.  In the industry, we’re all tracking changes to a few different specific LED features:

Each of these features has brought with it circumstances that can cause end customers problems. Solving these issues is the key to make sure LED products are accepted and appreciated by consumers in things to come.

LED tech until recently has required a separate “driver” to provide the right electrical current to the LED panel. That cigarette pack-sized part had to be incorporated into fixture design somewhere, which in turn limited how much extra space LED light fixtures needed to hide it. LED light bulbs contain a smaller internal driver of their own which has prevented some tiny incandescent bulb choices from being matched in LED versions. Research by manufacturers, including MaxLite, has resulted in these parts reducing to fractions of their former sizes. This has allowed the manufacture of brighter, smaller bulbs and fixtures that now contain an “integral driver on board” with the LED panels. The production is cheaper and no longer limits fixture design in the same way.

For end consumers, this ends the opportunity to replace the driver easily if this part fails … and this part is the one that most often fails long before the individual LED diodes go dark. Replacing a driver is a quick fix. Replacing a full LED panel is only simple if the manufacturer has that part available, which most do not today. There is no “standard” LED panel so far, and the array of choices is likely to become far vaster in the future.

Chris explained that LED lighting now enjoys an “efficacy” (efficiency) limit of about 100 lumens per watt. Scientifically, LED will never produce much more than that. New “filament” bulbs (the LED bulbs that look closer to vintage style bulbs) will push the limit to about 130 lumens per watt. For most applications, this is enough. But there are issues at the small end of bulb choices.

G4 halogen bulbs, which are popular in tiny lamps and contemporary design, produce about 200 lumens. Some fixtures tightly employ 10 to 20 of these bulbs in their design, but LED G4 bulbs haven’t been able to produce the same brightness within the same tiny size as the halogen standard. There are a number of similarly sized LED versions of halogen bulbs that have become smaller and brighter recently.

An issue for home owners is bulb replacement. Fixtures installed over the past few years will be experiencing bulb failure soon. When these home owners seek replacement LED bulbs, they will not only need to buy a compatible bulb base, but LED adds the complex need to find a bulb of the same color temperature and brightness. It is highly unlikely that the marketplace will offer the complete array of all LED bulb choices ever produced over time, so some consumers will unexpectedly face a need to replace up to 20 bulbs in their fixture because a single bulb has failed.

Dimming switches have always been more complex than most consumers realize. Fixtures that employ “low voltage” bulbs require a transformer. This in turn requires a low-voltage dimmer switch compatible with one of two types of transformers. Choosing the wrong dimmer will cause the transformer to fail within a short period of time.

To add to this complexity, LED dimming technology has not yet been standardized. “Some existing dimmers work with some LED fixtures” has been the state of the marketplace lately.  Not only are many LED bulbs not compatible with the most common “Triac” dimming technology, but many fixtures and controls have “minimum load” requirements -- when the combined wattage of the bulbs drops below perhaps 20W, the control or transformer no longer functions. LED bulbs regularly clock in at fewer than 5 watts each.

Smart manufacturers test their fixtures with specific dimmers to have recommendations at the ready when customers want to know a fully compatible choice. Otherwise, everyone including the customer, retailer, manufacturer and installer needs to hope for the best that the fixture, bulb and dimmer form a compatible trio. When they don’t, it’s necessary to change one of the choices until a viable set is found.

You must choose, wisely

So it’s a brave new world that includes LED technology. While we will use less electricity and have more lighting design choices that last far longer than the traditional options, we have two realities to choose between:

First, you can choose to dive into the cornucopia of LED variety and savings. There, you will enjoy many benefits but introduce the ideas of investing in new tech, the possibility of fixtures going obsolete, and the necessity of learning all you need to know to enjoy your fun new choices. The money you spend will be just as subjectively worthy as your investment in this year’s cell phone.

Or, secondarily we all still have the option to purchase fixtures with screw-in sockets and replaceable bulbs so we avoid many of these complexities and light our wonderful life with more familiar choices in bulbs and fixtures. What you know and love is still very popular and widely available today. And you can dip your toe carefully into LED without great risk.

Someday soon we’ll be looking back at these “early days” of LED and remembering how crazy it was that we had to have a “wall control” and the “bulbs” wouldn’t change color on demand. We’ll be wondering how we got along having to “plug in” lamps with a “cord”! But for now, we need to recognize and overcome the challenges that come with introducing this wonderful new energy-saving convenience to our lives.

And when the future comes, I’m going to need two or three robot maids.

Davis Gray is Sales Manager for Lamps Plus Professionals.