These landscaping designers aim to create an environment that is not only sustainable but regenerative. 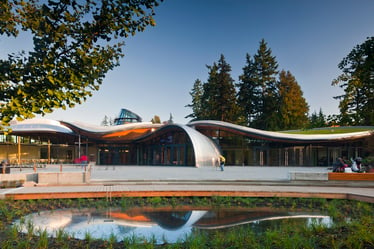 extension of your values. For Ken Larsson and David Stoyko, principals at Vancouver-based Sharp & Diamond Landscape Architecture (SD), that feeling is very familiar. For the past 3 years, their firm has been part of the Climate Smart Initiative, a British Columbia program that encourages companies to become net zero businesses.

“When we first started the program, we were ahead of most companies,” says Dave. “It is part of our corporate culture.” In Climate Smart, companies work to reduce energy consumption related to electricity, heating, transportation and waste management. At SD, audits are performed, they manage a staff car sharing system, follow a compost and recycling program, and an ethical purchasing policy. All commendable efforts they try to encourage their clients to adopt.

They believe in the concept of regenerative places, projects that restore and renew their own resources without placing extra demands on the environment. Their Vandusen Botanical Garden Visitor Centre in Vancouver is a regenerative place, an example of a harmonious relationship between building and site. Inspired by the orchid plant, the Visitor Centre is shaped like the petals of a flower. The living roof is designed to capture and treat its own water for its own use. The building, designed by Perkins + Will, is registered as LEED® Platinum and Cascadia Green Building Council’s Living Building Challenge (LBC) 2.0. Highlights include harvesting sunlight, rainwater capture, blackwater treatment, natural ventilation, and native plantings that require no irrigation system. 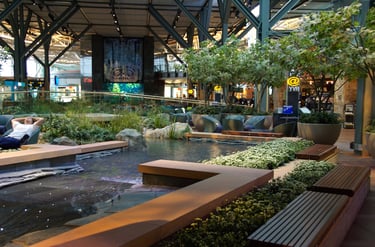 “We’ve been using Regenerative as a term even though it could be considered a buzzword. Regenerative is a more appropriate term than sustainable. It is easy to defend the VanDusen project as emblematic of a regenerative place.” says Ken. “We’ve always believed good design is supposed to be sustainable.”

Those of you who arrive in Vancouver by air will have noticed YVR’s natural interior scenery, also the work of SD. Unlike most airports where the air is only filled with stress and boarding calls, passengers departing and arriving hear the soothing sound of flowing water.

“There’s the physical and then there’s the experience,” explains Ken. “We brought in rocks, trees and a fish tank.” Actually, it’s a 30,000 gallon aquarium. The ensemble is meant to represent the landscape of British Columbia, evoking an introduction to the province for arriving passengers and pleasant memories for those flying out.

Ken and Dave credit YVR Airport Authority for being receptive to the idea of designing natural landscape within an international airport. “Security protocols made it challenging to bring materials in and out of the terminal. Another challenge was the weight of materials,” describes Ken. “The biggest challenge was real versus fake. In some cases, we had to use materials that weren’t natural.”

Their work continues outside the airport terminal, as SD has been behind the landscape architecture of much of the greater area on Sea Island. Over the course of 10 years, YVR Airport Authority has made significant investments in landscape architecture, as they strive to develop the Pacific gateway experience of the airport, no matter how you travel, by air, Canada Line, bus or car.

Though much of their work is in the Lower Mainland, SD are also involved in a number of projects in California, a state that is suffering from its worst drought in years.

“It’s tough, with the heat and the summer conditions,” says Dave. “You need to consider fire control and tolerance to drought.”

Many of their projects are in Southern California where the drought has been more acute and water conservation makes the choice of vegetation more difficult. “We used native and adaptive plants,” Dave explains. “The challenge is that in California, people expect a landscape to look lush and green.”

California and British Columbia might seem to have different climates, but Ken and Dave believe that summers in Vancouver can be almost as dry as in Golden State. “When you live in the Lower Mainland and the Pacific Northwest, you have more in common with California than with the areas east of the Rockies.”

It is a significant reminder that our planet’s changing climate can make citizens on either side of an international border experience similar extreme phenomena, in contrast to those within their own borders. Just one of the reasons the role of landscape architects will become increasingly important for metropolises like Vancouver, Los Angeles and beyond.