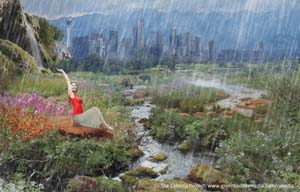 AS I BEGAN WRITING this month’s chapter on water conservation, I wondered if I’d have much to say. In the world of green building, things seem to be moving in the right direction. Toilets, faucets, dishwashers, clothes washers—virtually every point-of-use gadget now uses a fraction of the water it did in years past. Even irrigation, the elephant in the front yard (and the farmer’s field) is finally getting the attention it deserves. Drip systems, rain sensors and other technologies have begun to whittle away at that oft-ignored source of water waste.

But as I began to read the latest research on how we’re using our water, I felt like a resident of Whoville, that tiny city on a tiny dust speck imagined by Dr. Seuss. I’d been missing the “zoomed-out” view of water conservation.

That view, I’ve since learned, includes some really big water use issues—ones most people have never considered. But these changes, if taken seriously, might permanently head off the impending worldwide water crisis. I’m talking about “radical” ideas such as curtailing the growing of cotton, reducing the use of toilet tissue, limiting consumption of beef and letting go of the concept that turning corn into ethanol is a good idea.

Take toilet tissue. A 1.6-gpf toilet uses about 2,900 gallons per person per year. Switch to a dual-flush toilet that uses .8 gpf, and you might reduce that by 1,000 gallons a year. But according to Worldwatch.org, Americans use about 57 sheets of toilet tissue per day, most of it from virgin forests (another conservation issue), produced at a water cost of 3.7 gallons per day. That’s 1,350 gallons of “virtual water” waste per person. Then there’s the additional water used to treat and dispose of the paper waste.

We all know Americans dislike bidets, but surveys show they’re clueless about how a bidet works, including the facts that it’s more sanitary than toilet tissue, not just for women and (I’m not making this up) won’t make you gay if you’re not already disposed that way.

If the “big picture” approach doesn’t spur them to behavior change, why not take the “it saves you money” pitch offered by this brilliant blog from Brondell.com:

“One person needs to purchase about 81 rolls a year, spending $243 a year on toilet paper. After the initial investment of a bidet seat or bidet attachment you will enjoy a savings of $182 a year. Now multiply that by a family of four and you have some serious money savings.”

Of course, bidets still use water, but in miniscule quantities compared to the alternative. Toilets use about 27 percent of indoor water, or 24 gallons per person per day. Imagine cutting that in half, freeing up 360 million gallons of fresh water each year. It’s an achievable goal.

My point is that by calling attention to these major water-guzzling aspects of modern society and offering clever, common-sense alternatives, we have the power to “slow the flow” of water, to treat it as the precious resource it is, not a convenient method for getting rid of human waste.

We can use water much, much more consciously, by separating drinking water from graywater and blackwater. We can live without cotton t-shirts. We can live without toilet tissue and bi-weekly hamburgers and corn syrup and ethanol. Heck, if we’re willing to change a little, we might even be able to keep living in Las Vegas and farming in Texas.

Now is the time to demonstrate why we consider ourselves an evolved, innovative species. The alternative is to take the fatalistic view—where a dystopia of thirst is the end game. Isn’t it infinitely preferable to look beyond Whoville and make the obvious changes that will keep our species well-watered for generations to come?