Homebuilders are finding that more customers than ever want green houses that promote both their well-being and the environment. 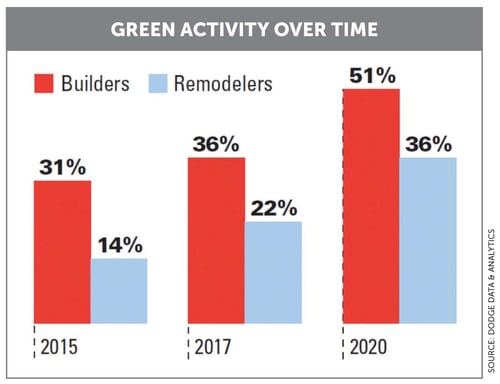 GREEN CONSTRUCTION already makes up a growing portion of homebuilders’ work orders, and things aren’t expected to slow down. But in the coming decade, the market’s health will be all but married to the welfare of its customers, according to a market study by Dodge Data & Analytics.

According to Green and Healthier Homes, an aging but more experienced homeowning generation of baby boomers will help turn health into “the next critical trend” as the green building movement matures. Eighty-three percent of builders surveyed for the study also believe that consumers will pay more for a healthier home versus a green home.

If those results come true, all homebuilding is in for a hectic but profitable ride. Thirty-one percent of homebuilders report that more than 60 percent of their projects are green, and 51 percent expect to be doing that level of green work by 2020. Building homes with a healthy focus won’t hurt. “As the building industry’s attention shifts to the impact of buildings on the health of their occupants, the focus on health has the potential to boost the green residential market even further,” the report states.

Dodge Data & Analytics conducted short, confidential interviews with nine homeowners who had purchased a home in the last year to determine the degree to which green and healthier features influenced their current purchase, and how these factors might influence them in the future. DDA notes that while the group interviewed is too small to create a portrait of generational differences, the responses offer insight into the age-based differences reported by builders, in terms of the homebuyer responses to green and healthier homes and features. 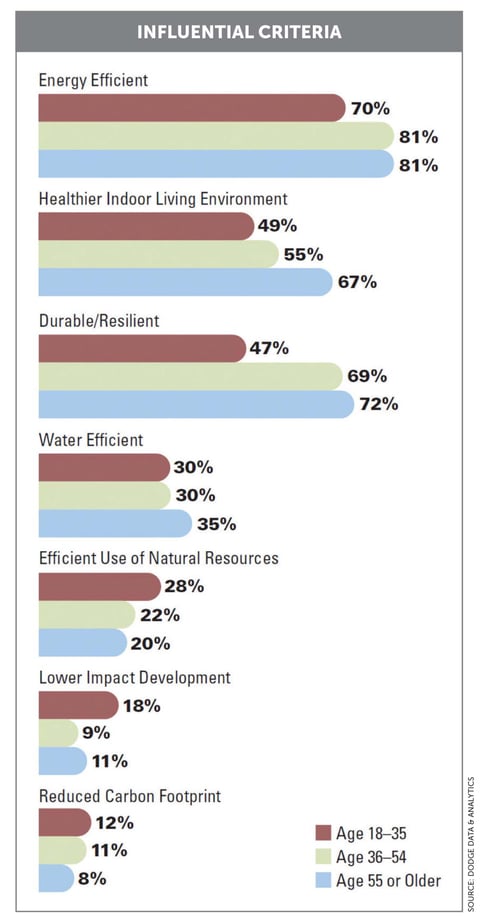 Green is influential, but not a primary driver of home purchases. Participants said major factors that influenced the purchase of their homes included condition of the home, location (including the neighborhood), the type of home and the price. But when asked to rate how specific green elements influenced the decision to buy their home, it was a different story:

More experienced homebuyers have different green priorities. The homebuyers’ experience with other homes, knowledge about hom building or knowledge about environmental issues is a critical factor in determining how they prioritize features, according to DDA. Builders expect older buyers (age 55-plus) to generally prioritize most aspects of green homebuilding directly related to performance more than younger buyers,” the report notes. “The older the homebuyer, the more likely they are to have experienced good and bad features in previous homes and to be more cognizant of ways to address the issues they find.”

There are exceptions. One young interviewee (under age 35) with family members in the construction industry knew to consider items such as the R-value of the roof and insulation. By comparison, another first-time homebuyer associated energy performance with merely having efficient appliances, according to DDA.

There is no clear-cut winner when it comes to healthier homes. There was no consensus in terms of the valuation of a healthier home, but a few interesting trends emerged, according to the study:

For the survey, homebuilders were asked the generational makeup of their clients, splitting them into age groups of 18 to 35 (millennial), 36 to 54 (Generation X), and 55 and older (baby boomer).

When it comes to homebuying, the three most influential green criteria—energy efficiency, health impacts and durability—are influential to a much lower percentage of homebuilders’ clients age 35 and under than they are for other groups, especially those 55 and older. DDA cites several possible reasons: 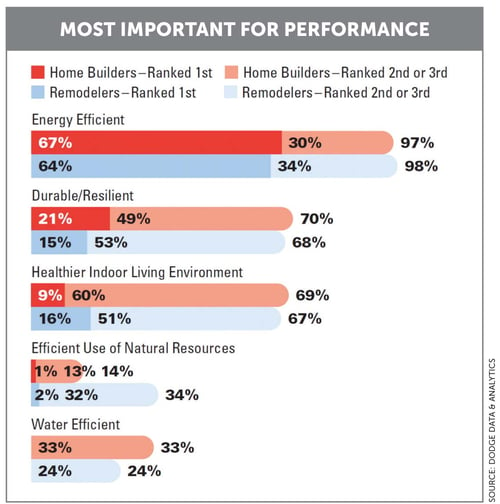 While the rankings are relatively low across the board, more builders believe that these general impacts are highly influential for the youngest generation of buyers than those builders who believe that they influence buyers who are 55 and older. This supports the notion that younger buyers are more influenced by the broader impacts of their behavior on the world at large, while older buyers are more focused on the specific financial and physical performance of their homes. “This is an important distinction to keep in mind when attempting to market green or healthier homes to these audiences,” the report notes.

A Healthier Performance Ahead

Homebuilders and remodelers were asked to rank the top three most important green practices to improve a home’s performance out of a list of seven options. Not surprisingly, energy efficiency tops the list, with nearly all respondents selecting it in their top three. This finding is consistent with previous studies, DDA notes.

But an up-and-coming practice toward improving a home’s green performance for builders and remodelers is the creation of healthier indoor living environments. In the current study, it is not only selected by over two-thirds of builders and remodelers as among the top three most important practices, but it also is selected by 11 percent overall as the most important practice out of the list of seven. This variable may increase in importance if the industry continues to give more attention to healthier buildings, according to DDA.

Previous findings suggest that those who use these methods find them very important, but that their use is low, DDA notes. The current study also suggests more industry education is needed on the importance of these strategies.

Meanwhile, the difference between homebuilders heavily involved in green and those less involved is more distinct on all three indoor environmental quality products/practices than they are for any other category.

Is a Healthy Indoor Environment Worth More?

Builders and remodelers generally believe baby boomers, Generation Xers and millennials are all willing to pay more for a healthier home. According to the survey results, at least 80 percent of each age group will pay a higher price, a finding that confirms that the concept of healthier homes resonates with consumers. It also demonstrates that green builders and remodelers can benefit from capitalizing on the impact of green building approaches on home owner health, DDA notes.

However, there are differences by age of consumers in how much more builders and remodelers believe they will pay for a healthier home: 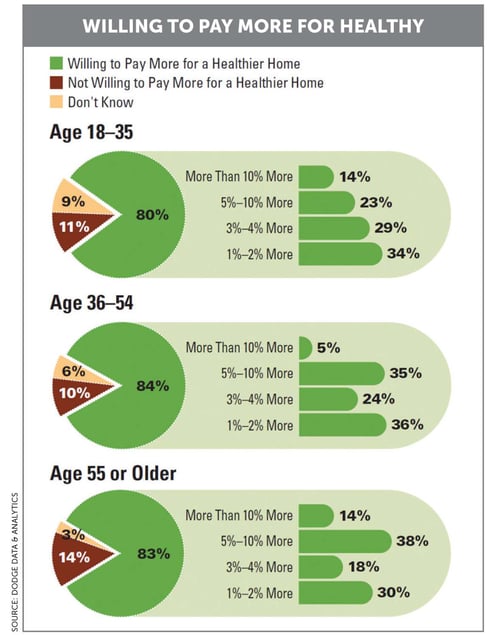 What Goes into a Healthy Home

Although several features in homes have been demonstrated to positively impact occupants’ health, their use by builders and remodelers varies widely, according to the study.

For the most part, a similar percentage of homebuilders and remodelers report use of these features during construction. The level of green involvement, on the other hand, is influential in determining the degree of use of many healthier home features. 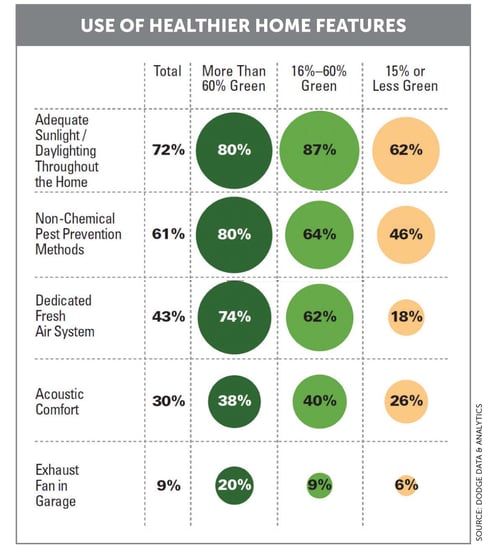 Air Quality Products by Degree of Use

Green and Healthier Homes identifies several types of air quality products considered important to builders and remodelers in their sustainable housing projects, depending upon their amount of green involvement: