Our world is drowning in plastics.  Are commitments to banning single use plastics and innovations in recycling techniques and biodegradable replacements enough to give us hope for a cleaner future?

Our planet has become overwhelmed by plastic.  Since its invention in the 1950’s, nearly 9.2 billion tons of plastic has been generated—6.9 billion tons of which is now waste that simply won’t go away.

Low fossil fuel prices and lack of profitable markets for recycled materials have led to a disturbing reality of limited recycling—it is estimated that only 9% of all plastics ever get recycled.

Jenna Jambeck, a University of Georgia engineering professor, estimates that somewhere between 8-14 million tons of plastic are dumped into the ocean each year, most of which is carelessly tossed away on land and in rivers in Asia (home to 13 of the world’s top 20 plastic waste contributors), and then washed into the sea.  Abandoned fishing equipment is also a major culprit.

Our profligate use of plastics has resulted in five massive swirling trash gyres in the North Pacific, North Atlantic, South Pacific, South Atlantic and Indian oceans.  The Great Pacific Garbage Patch is now estimated to be 16 times larger than previously thought, weighing in at a preposterous 79,000 tons.

The UK government recently issued a startling report projecting that plastic pollution will increase three-fold within seven years unless dramatic action is taken, and that, if we stay on our current course, oceans will contain more plastic by weight than fish by 2050.

The problem with plastic is that it doesn’t biodegrade.  Instead, it photodegrades, meaning that it breaks into smaller and smaller microparticles that infest our water and land, and are ingested by birds, fish, and other species—even humans. 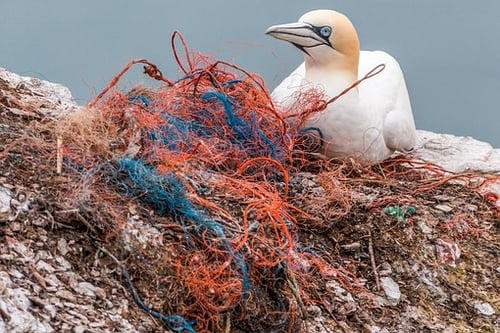 These tiny plastic particles clog animals’ digestive systems, killing millions of marine animals and birds by starvation each year (their stomachs are so full of plastic microparticles that they can’t get the nutrients they need to live).   When ingested by humans, the microparticles, which contain toxins like endocrine disruptor Bisphenol A, lead to increased risks of breast cancer, prostate issues, and behavioral problems.

Yes, the current plastic prognosis is bleak.  However, there is some silver lining on two main fronts: the rapid implementation of single-use plastic bans (which, in turn, reduce demand and production), and the development of innovative solutions for plastic replacements and recycling techniques.

Across the globe, a growing number of towns, cities, and nations are implementing bans on petroleum-based, non-biodegradable products that cause harm to the environment.  In fact, a report recently issued by the UN titled “Single-Use Plastics: A Roadmap for Sustainability” validates that over 60 countries have introduced bans or levies on single-use plastics.

Bangladesh was the first country to ban single-use plastic bags in 2002.  The city of San Francisco followed suit in 2007, and the Netherlands banned microbeads in cosmetics in 2014.

The state of California banned single-use plastic bags over a year ago, opening the door for the elimination of other plastic products like cups, water bottles, and food containers.  Boston just approved a similar ban to keep an estimated 350 million single-use plastic bags out of the city’s landfills and waterways. And Kenya has made trafficking in plastic bags a crime punishable with steep fines and even jail time.

Vancouver, the first city in the world to approve a comprehensive zero waste strategic plan, has adopted a ban on single-use plastics as a part of its “Zero Waste 2040” initiative.  Beginning June 1, 2019, the distribution of drinking straws and polystyrene foam cups and containers by restaurants will be prohibited.

The European Commission recently proposed a ban of the 10 most common single-use plastic products and restrictions on the discarding of fishing equipment.  As part of the proposed ban, single-use plastic products with readily available alternatives, like cutlery, plates, and straws, as well as microbeads in cosmetics, will be banned entirely.  Other products that aren’t so easy to replace, such as food containers and packaging, will be limited.

India, home to 1.3 billion people and one of the world’s fastest growing economies, just announced plans to eliminate all single-use plastics by 2022.  When announcing the initiative, Indian Prime Minister Narendra Modi said, "It is the duty of each one of us, to ensure that the quest for material prosperity does not compromise our environment.  The choices that we make today will define our collective future. The choices may not be easy. But through awareness, technology, and a genuine global partnership, I am sure we can make the right choices. Let us all join together to beat plastic pollution and make this planet a better place to live."

Even the International Olympic Committee and other sports groups including World Sailing, International Ice Hockey Federation, and World Golf are joining in, pledging to eliminate single-use plastics from their organizations and all future sports events by 2020.

Corporations are responding too.  Nestle, PepsiCo, Amcor, and Unilever have pledged to convert to 100% reusable, recyclable, or compostable packaging by 2025, and to ensure that at least 70% of plastic packaging is effectively recycled or composted.

While bans on plastic are paramount to reducing plastic waste, developing innovative replacement technologies and improving recycling processes for existing plastics are equally as important.  Fortunately, scientists are on the job.

Researchers from the University of Portsmouth in the UK accidentally stumbled upon an enzyme that eats PET (polyethylene terephthalate)—the material that is used in plastic bottles.  The enzyme, called PETase, returns polyesters back to their fundamental building blocks so that the material can be used again, enabling plastic bottles to be recycled directly back into plastic bottles in a closed loop cycle.

Today, when plastic is recycled, it typically breaks down into molecules that can’t easily be reshaped without undergoing intensive chemical processes.  So, “useful” items generally get “downgraded” into a different type of application.  For example, recycled plastic bottles are most often turned polyester fibers for carpet or fabric rather than back into a usable consumer product.  Considering that approximately 1 million plastic bottles are purchased around the world every minute (yes—read that again, every minute!), PETase is a dramatic discovery.

On the other side of the pond, scientists at Colorado State University have developed a new polymer with similar characteristics as plastics that can be more readily returned into its original molecules and recycled, without requiring toxic chemicals or intensive processing.  According to the CSU chemistry team, the strong, durable, light, and heat-resistant material can, at least in principle, be recycled and reused indefinitely.

Biomolecular engineers at the University of Houston are developing biorenewable components for plastics, replacing petroleum-based polymers with those made from vegetable oils or other plant-based materials, which means that the materials can be composted at the end of their useful lives.

Research groups across the globe are developing recycling processes for existing plastics that require less energy, enable the mixing of plastics (to avoid the need for sorting), and expand the types of plastic that can be recycled.  Given that new materials, like the ones mentioned above, may take years to enter the market, improving the methods to recycle existing plastics is an essential priority.

While the tide is certainly turning on our global plastics plague due to the combination of plastic bans and innovative replacement technologies and recycling solutions, there remains a colossal amount of work to do.  The problem is vast and a comprehensive, holistic approach is needed that drastically reduces demand for and production of plastic.  So, don’t be surprised when countries begin charging plastic taxes, governments start offering incentives to reduce plastic waste, and companies ramp up their efforts to capitalize on plastic recycling.

Know of any innovative solutions for solving our plastics problem?  Write to me at sara.gutterman@greenbuildermedia.com.