Intrepid American explorer Victor Vescovo journeyed to the bottom of the sea, and what did he find?  Plastic.  Aside from the heartbreaking fact that the everlasting material can now be found in the most remote places of the planet, here is why it’s important to humanity.

It’s official: from the highest mountain peaks to the depths of the ocean floor, our planet is covered in plastic.

Retired naval officer turned private equity investor and adventurer Victor Vescovo confirmed the sad truth earlier this week after completing a record-breaking 4-hour dive in a submersible to explore the deepest place in the world: Challenger Deep in the Mariana Trench, seven miles below seal level in the western Pacific Ocean.

Vescovo emphasized his disappointment when he saw the “obvious human contamination of the deepest point in the ocean,” and the results of mass consumption by billions of people on earth.

Since its invention in the 1950’s, we’ve generated nearly 10 billion tons of plastic, only 9% of which ever get recycled. 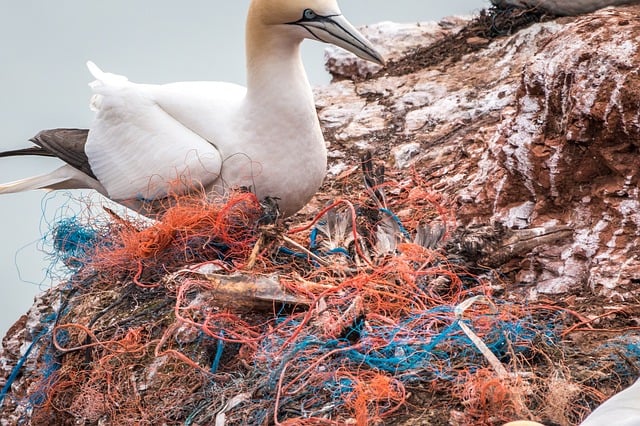 Image by A_Different_Perspective from Pixabay

Somewhere between 8-14 million tons of plastic are dumped into the ocean each year, most of which is carelessly tossed away on land and in rivers in Asia (home to 13 of the world’s top 20 plastic waste contributors), and then washed into the sea.  Abandoned fishing equipment is also a major culprit.

Our profligate use of plastics has resulted in five massive swirling trash gyres in the North Pacific, North Atlantic, South Pacific, South Atlantic and Indian oceans.  The Great Pacific Garbage Patch is now estimated to be 16 times larger than previously thought, weighing in at a preposterous 79,000 tons.

The UK government recently issued a startling report projecting that plastic pollution will increase three-fold within seven years unless dramatic action is taken, and that, if we stay on our current course, oceans will contain more plastic by weight than fish by 2050.

The problem with plastic is that it doesn’t biodegrade.  Instead, it photodegrades, meaning that it breaks into smaller and smaller microparticles that infest our water and land, and are ingested by birds, fish, and other species—even humans.

These tiny plastic particles clog animals’ digestive systems, killing millions of marine animals and birds by starvation each year (their stomachs are so full of plastic microparticles that they can’t get the nutrients they need to live).   When ingested by humans, the microparticles, which contain toxins like endocrine disruptor Bisphenol A, lead to increased risks of breast cancer, prostate issues, and behavioral problems.

Moreover, a new study published in the Communications Biology confirms that plastic pollution negatively impacts ocean bacteria that produce 10% of the Earth’s oxygen.   According to the study’s lead author Dr. Sasha Tetu, “exposure to chemicals leaching from plastic pollution interfered with the growth, photosynthesis and oxygen production of Prochlorococcus, the ocean's most abundant photosynthetic bacteria…  If we truly want to understand the full impact of plastic pollution in the marine environment and find ways to mitigate it, we need to consider its impact on key microbial groups, including photosynthetic microbes”

Yes, the current plastic prognosis is bleak.  However, there is some silver lining on two main fronts: the rapid implementation of plastic bans and the development of innovative solutions for plastic replacements and recycling techniques.

Last week, the Basel Convention on the Control of Transboundary Movements of Hazardous Waste and their Disposal was signed by 187 countries—notably not the U.S.—enacting a legally binding framework that will reduce plastic waste and improve the regulation of its trade.

Across the globe, a growing number of nations, states, and cities are implementing bans on petroleum-based, non-biodegradable products that cause harm to the environment.  In fact, a report recently issued by the UN titled “Single-Use Plastics: A Roadmap for Sustainability” validates that over 60 countries have introduced bans or levies on single-use plastics.

In the U.S., California banned single-use plastic bags a few years ago, opening the door for the elimination of other plastic products like cups, water bottles, and food containers.  States like Hawaii and New York, as well as Boston, Chicago and Seattle, have enacted similar measures. California and Seattle have also banned the use of plastic straws.  This legislation is important, given that shoppers worldwide use some 500 billion single-use plastic bags annually, and 500 million straws are used in the U.S. daily.

The European Commission approved a ban of the 10 most common single-use plastic products as well as abandoned fishing gear.  As part of the proposed ban, single-use plastic products with readily available alternatives, like cutlery, plates, and straws, as well as microbeads in cosmetics, will be banned entirely.  Other products that aren’t so easy to replace, such as food containers and packaging, will be limited.

India, home to 1.3 billion people and one of the world’s fastest growing economies, just announced plans to eliminate all single-use plastics by 2022.

Interestingly, Kenya has the strictest plastic bag ban of all—the punishment for breaking the law is up to four years in jail or fines up to $40,000.

Corporations are responding too.  Nestle, PepsiCo, Amcor, and Unilever have pledged to convert to 100% reusable, recyclable, or compostable packaging by 2025, and to ensure that at least 70% of plastic packaging is effectively recycled or composted.

SC Johnson is encouraging customers to use concentrates that can be combined with tap water in reusable bottles, which the company claims will reduce 80% of the plastic waste generated by cleaning products.

While bans on plastic are paramount to reducing plastic waste, developing innovative replacement technologies and improving recycling processes for existing plastics are equally as important.  Fortunately, scientists are on the job.

Researchers from the University of Portsmouth in the UK accidentally stumbled upon an enzyme that eats PET (polyethylene terephthalate)—the material that is used in plastic bottles.  The enzyme, called PETase, returns polyesters back to their fundamental building blocks so that the material can be used again, enabling plastic bottles to be recycled directly back into plastic bottles in a closed loop cycle.

Today, when plastic is recycled, it typically breaks down into molecules that can’t easily be reshaped without undergoing intensive chemical processes.  So, “useful” items generally get “downgraded” into a different type of application.  For example, recycled plastic bottles are most often turned polyester fibers for carpet or fabric rather than back into a usable consumer product.  Considering that approximately 1 million plastic bottles are purchased around the world every minute (yes—read that again, every minute!), PETase is a dramatic discovery.

On the other side of the pond, scientists at Colorado State University have developed a new polymer with similar characteristics as plastics that can be more readily returned into its original molecules and recycled, without requiring toxic chemicals or intensive processing.  According to the CSU chemistry team, the strong, durable, light, and heat-resistant material can, at least in principle, be recycled and reused indefinitely.

Biomolecular engineers at the University of Houston are developing biorenewable components for plastics, replacing petroleum-based polymers with those made from vegetable oils or other plant-based materials, which means that the materials can be composted at the end of their useful lives.

Research groups across the globe are developing recycling processes for existing plastics that require less energy, enable the mixing of plastics (to avoid the need for sorting), and expand the types of plastic that can be recycled.  Given that new materials, like the ones mentioned above, may take years to enter the market, improving the methods to recycle existing plastics is an essential priority.

While the tide is certainly turning on our global plastics plague due to the combination of plastic bans and innovative replacement technologies and recycling solutions, there remains a colossal amount of work to do.  The problem is vast and a comprehensive, wholistic approach is needed that drastically reduces demand for and production of plastic.  So, don’t be surprised when countries begin charging plastic taxes, governments start offering incentives to reduce plastic waste, and companies ramp up their efforts to capitalize on plastic recycling.