Geothermal Heating and Cooling Systems; Great for the Environment!

Geothermal Heating and Cooling Systems; Great for the Environment!

An earth coupled HVAC system is packed with "Earth Friendly" benefits, especially when compared with any other types of air-conditioning and heating systems. As heating and cooling systems go, a ground sourced system comes closest to the way Mother Nature would heat and cool your home if given the opportunity. 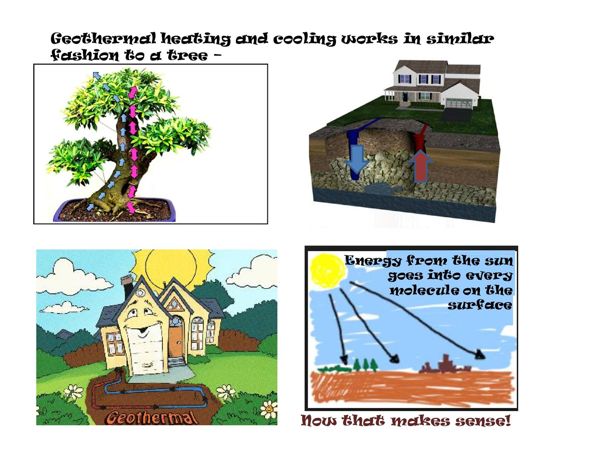 That's because with geothermal, your house becomes coupled with the Earth beneath, sharing that temperature with your environmentally friendly geothermal heat pump, similar to the way the roots of trees share nutrients with their branches and leaves. Take a look at some of the environmental benefits you can enjoy with geothermal system:

From an April 2nd news report, US Navy officials reported, “Over the past several years, Northwest Navy installations have completed many projects that improved the efficiency and reliability of utility systems that support operations at each installation. Such projects include upgrading lighting fixtures, renovations to bachelor living quarters, utilizing ground source or geothermal heating and cooling systems (emphasis added), and adjusting thermostats and air-conditioning.

"Improving energy efficiency is closely tied to our mission success. Not only is it better for our budget and the environment (emphasis added), but it also helps us in the long-run to safeguard the future of our mission to support the Fleet, the Fighter and their Families," said Commander, Navy Region Northwest Rear Adm. Bette Bolivar. "I'm proud of what Team Northwest has achieved so far and look forward to the day we reach our goal.

In an April 3rd news report, a Ball State University representative responded to questions about the heating and cooling alternatives for the campus. “We certainly looked at coal-fired again with all kinds of emission control equipment and so forth," said Jim Lowe, Director of Engineering & Construction Management. "We also looked at all natural gas, but actually deferred away from natural gas, which seems ironic when you think about it. It's cheap, but it's so volatile.”

“Going to geothermal, by far, was the best approach - not just financially, but for the environmental impact (emphasis added) and the longevity of the system as well,” Lowe said.

Geothermal HVAC systems are the unexploited frontier of the green movement, and quite literally the foundation for green buildings.  Geothermal HVAC systems don’t get much press.  You can’t see them (because equipment is all inside), you can’t hear them; the classic “out of sight–out of mind” scenario.  And eatrth coupled HVAC systems remove up to four times the energy consumption from the electrical grid per dollar spent than photovoltaics add to the electrical grid per dollar spent,* giving "Geo" a better ROI (Return On Investment).

Going “Green” usually denotes reduction of energy consumption and related costs, whether fossil fuel or all electric. The more peak load we can take off of the electrical grid, the fewer power plants we need.  According to a  McGraw-Hill Construction study released on November 13, 2013 at the International Summit at the Green Build Conference and Expo in San Francisco, "Green building has become a long-term business opportunity with 51% of study firms planning more than 60% of their work to be green by 2015, up from 28% of firms in 2012."

The United States Environmental Protection Agency lauds, “Ground source heating and cooling can be done almost anywhere in the United States using a geothermal heat pump, a highly efficient renewable energy technology that takes advantage of the constant temperature of the earth beneath the surface. The heat pump transfers heat stored in the Earth or in ground water into a building during the winter, and transfers it out of the building and back into the ground during the summer. In other words, the ground acts as a heat source in winter and a heat sink in summer. Applications of this technology are for space heating and cooling and hot water”

Want to have some fun?  Here's a great Earth Day activity for the whole family! 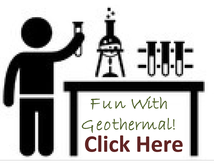 *Based on installed cost of $5.90/watt from report “Tracking the Sun VI, An Historical Summary of Installed Price of Photovoltaics, July 2013 Lawrence Berkely National Laboratory” when compared to installed cost of electrically powered geothermal heating and cooling ($6000/ton) with a Coefficient of Performance of 4.0.