To quote American nature writer Kenneth Brower, “A living planet is a rare thing, perhaps the rarest thing in the universe, and a very tenuous experiment at best.” A living planet is comprised of complex ecosystems that nourish myriad species, each one interdependent, relying on the others to play their role to such perfection that only exists in nature.

When ecosystems fall out of balance, chaos ensues. The cycle of life is interrupted, and species perish. Without sustainable natural systems, there is no provision for communities, no sustenance for societies, no nourishment for economies.

Since our arrival some 60,000 years ago, humans have had a major impact on the planet’s ecosystems. Our presence has—slowly at first and now quite rapidly—caused the extinction of a broad spectrum of species across the globe.

Earth has experienced 5 previous mass extinction events, all produced by natural cataclysms or external forces (such as asteroid impacts). Today, we’re in the midst of a sixth mass extinction—this one caused not by the cycles of nature or an external force, but by the destructive activities of a single species: humans.

Humans are a product of nature, yet we act as if we’re impervious to its limits, separating ourselves from its harmonic equilibrium. Indeed, we have become the biggest influencing factor in determining the health, or weakness, of the environment.

We have altered waterways and moved mountains, created deserts and negatively impacted every single ecosystem on the planet. And, as our Ecological Footprint (the biologically productive area that humans need for crops, grazing, development, fishing, and forestry, and the associated carbon emissions from the use of these areas) increases, the health of natural systems across the planet continues to deteriorate.

EO Wilson, the father of modern sociobiology, says that “our conquest of Earth has happened so quickly that the rest of the biosphere has not had time to adjust, and our heedless destruction of species shows scant signs of abating.”

Wilson, who actually coined the term ‘biophilia’ to express the human need to live in harmony with other species, avows that the only way for us to mitigate the sixth mass extinction, or “biological holocaust” as he calls it, is to set aside half of the planet as permanently protected land—a vision that he calls Half Earth.

Wilson’s science-based work shows that isolated habitat “islands”, such as national parks and landscapes that are completely surrounded by human development, inevitably lose species, so he advocates for a massive system of connected greenspaces, uninterrupted corridors, and protected areas in order to allow creatures of all kinds the room they need to migrate, feed themselves, and reproduce.

Wilson’s Half Earth concept may sound radical, but it might be the only way to remediate the deadly effects of human-caused climate change and habitat destruction. According to the World Wildlife Fund’s (WWF) recently issued Living Planet Report, which assessed the health of 10,000 species across the globe, the world’s population of mammals, birds, reptiles, amphibians and fish has declined by 52% since 1970 due to climate change, habitat destruction, environmental degradation, and poaching.

Climate change, affecting water levels and freshwater system connectivity, compounded by habitat loss and pollution, has led to a dramatic 72% decrease in freshwater species populations. Habitat destruction (to make way for agriculture, urban development and human land use) and excessive hunting have caused a decline in terrestrial species populations (down 39%). Changing water temperatures, acidification, and overfishing has led to substantial declines in tropic marine populations and seabirds (down 39%).

“Biodiversity is declining in both temperate and tropical regions, but the decline is greater in the tropics,” stated the WWF report. Latin America is experiencing the most dramatic decline, with a decrease of 83% in species populations.

So, why should we care if vertebrate species have decreased by 50% since the time of the Nixon administration? Because these species sustain life itself—they constitute the very fabric of our ecosystems, enabling our forests, oceans, plains, deserts, tundras, and other wild areas to thrive. Without them, natural systems will collapse, and the basic eco-services that life is wholly dependent on—photosynthesis, pollination, and carbon sequestration to name an important few—go away, and life as we know it disappears.

Responsible development will play a critical role in determining the future health of the planet. If we can get the development model right—designing and building communities in a regenerative manner, using resource-conserving green products, minimizing waste, and protecting habitat and wildlife corridors, then we might be able to moderate further destruction. 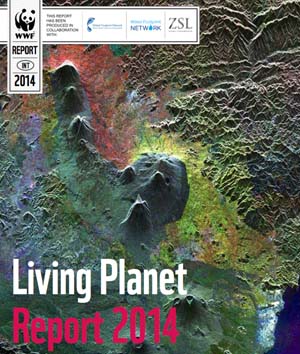 According to WWF, “Nature conservation and sustainable development go hand-in-hand. They are not only about preserving biodiversity and wild places, but just as much about safeguarding the future of humanity – our well-being, economy, food security and social stability – indeed, our very survival.”

WWF advises urgent action and the development of a global plan to allay further environmental degradation and species extinction. Nonetheless, despite vast habitat destruction and wildlife demise, WWF remains hopeful about the future. The organization is collaborating with a wide spectrum of governments, NGOs, corporations, and communities to find ways to reduce our collective footprint.

Marco Lambertini, General Director of WWF International, says, “The planet has never been more aware of the problems and the solutions. We’ve never been able to engage so many people across the world. Particular sectors have shown incredible engagement, particularly the private business sector. But what really excites me most is the booming of civil society engagement across the whole world. That’s particularly at the local level—community based, local NGOs, groups of concerned citizens are really coming together and creating a new global movement that I think has the potential to turn things around.”

It’s time to cease our destructive habits and embrace a biophilic lifestyle in which we develop the respect for other species that they most rightly deserve. Together, we can close this destructive chapter in our history, and move on to a vibrant future in which humans live harmonically, deferentially, and attentively within nature’s equilibrium.

How do you think we can mitigate mass extinction of species and ecosystems around the globe? Write to me at sara.gutterman@greenbuildermedia.com or follow me on Twitter or Facebook.