Ever since plants and fungi colonized the land 500 million years ago, forests have provided essential habitat for countless living creatures. For humans, forests initially represented shelter, sustenance, and protection. The moment we discovered that we could make fire, the value of forests transformed. When we learned how to clear forests to cultivate crops and feed our livestock, their value proposition changed again.

Covering 31% of the land, forests are the lungs of the planet, providing oxygen—the essential element for life on Earth. They are the home to innumerable exotic species, arbiters of weather patterns, carbon sinks, and temples of the soul.

Unfortunately, timber has been thoroughly exploited throughout the ages, leading to the demise of forest ecosystems across the globe. Today, only 7% of the old-growth forests remain in the U.S. Tropical rainforests are facing destruction at the rate of 100,000 acres per day (resulting in the loss of 50,000 plant, animal, and insect species annually) primarily because of the increased demand for palm oil and soy plantations.

These plantations, largely owned by U.S.-based industrial agriculture companies, are being developed in some of the most biodiverse, remote areas, taking a serious toll on virgin forest ecosystems in places like the Amazon, Malaysia, and Indonesia. It is estimated that the world’s rainforests, which once covered 14% of the Earth’s land surface and have diminished to less than 6%, could vanish completely within the next 50 years at the current rate of deforestation.

Some claim that soybeans and palm oil (a primary ingredient in many processed foods) are the nemeses of our forests, contributing substantially to the quickening pace of deforestation and climate change.

The demand for palm oil has doubled in the last decade and will continue to grow exponentially as the global consumption of processed foods increases and usage of palm oil for biogas expands. Because of their high economic value, farmers in tropical areas are burning primary forests to plant palm trees.

Soy is now used in animal feed, and according to the World Wildlife Fund, the increase in global consumption of meat has driven up the demand for soy 10-fold since 1960. This demand is expected to double again by 2050.

Other factors have contributed to deforestation, namely sustenance farming (often times in the form of ‘slash and burn agriculture’, a process in which farmers, usually local inhabitants trying to provide for their families, clear small parcels of land for crop cultivation), urban sprawl, and logging.

The effects of deforestation are dramatic. When forests are cut, large amounts of carbon are released into the atmosphere. Millions of species lose their habitats (70% of the Earth’s land animals and plants live in forests). Soils dry out without the life-protecting cover of the forest canopy, degrading into eroded, barren deserts that invite flash flooding and landslides. Water cycles are affected since trees can no longer extract ground water or precipitation in their roots and release it into the atmosphere, making microclimates hotter and dryer.

According to the Intergovernmental Panel on Climate Change, deforestation is a major contributor to global warming and is responsible for approximately 20% of the world’s greenhouse gas emissions (released when trees are cut).

Ironically, forests represent nature’s best defense against climate change. Their ability to extract carbon from the atmosphere is one of the most important tools that our planet has to mitigate the astronomical rise in greenhouse gases and corresponding temperature fluctuations. This unique ability to sequester carbon may also be the catalyst that once again transforms the economic value forests, as standing forests become more valuable than timber-based products in light of the essential ecosystem services that they provide.

Let’s hope, for the sake of the forests and all of their extraordinary inhabitants, that appropriate policies for forest management, sustainable harvesting, and land use are created as a part of our global response to climate change, including the harvesting of dead timber that would otherwise be emitting carbon and replanting young trees that can actively store carbon.

Fortunately, organizations like the United Nations and World Bank are developing programs to reduce deforestation. A strategy to ‘Reduce Emissions from Deforestation and Forest Degradation’ (REDD) is emerging in developing countries as a way to provide financial incentives and compensation to indigenous communities to preserve primary forests, turning local citizens into forest stewards. 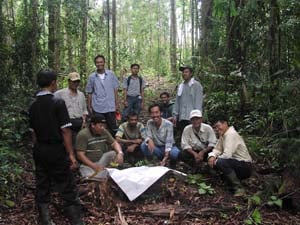 Other groups, like the Tropical Forest Foundation are in the trenches fighting against deforestation by educating communities around the globe about sustainable harvesting and appropriate, financially-viable forest management.

Innovative agricultural practices, such as agro-forestry (mimicking the food production cycles of natural forests), hold the promise of decreased environmental impact, and the demand for sustainably harvested timber for use in certified products has increased dramatically.

Reforestation efforts are also on the rise, ranging from the restoration of primary forest habitats to the development of high-yielding forest plantations that can be readily managed for economic benefit.

As the Chinese proverb goes, the best time to plant a tree is 20 years ago; the second best time is now. May we find the compassion in our hearts and wisdom in our souls to make decisions to that will preserve our precious forests from further decimation.

How do you think we can reduce deforestation to restore habitats and combat climate change? Write to me at sara.gutterman@greenbuildermedia.com or follow me on Twitter or Facebook.