Recent disastrous fires and changing codes suggest that rigid foam cladding is too risky, but mineral wool can fill the void. 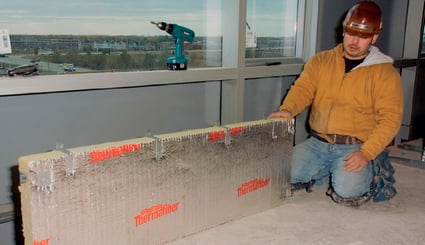 Since the catastrophic Grenfell Tower fire in the UK in June of 2017, questions about the safety of cladding commercial structures with rigid foam continue to arise. To be clear, concerns about low-rise residential properties seem less urgent. The issue is whether structures that contain large number of people—apartment buildings, office complexes, schools and hospitals-- are put in harm’s way by continuous rigid foam-based cladding.

Here, in our view, is the crux of the problem. Rigid foam, both expanded (EPS) and extruded polystyrene (XPS), for all of their good insulating qualities, can become a large building’s worst enemy in a fire. The foam ignites at 680°F (360°C), then proceeds to burn until all of the “fuel” is used up. During that time, hot, flaming drips of material fall to ignite lower floors and surfaces, and a huge quantity of noxious smoke is produced.

Here’s a shocking narrative from a devastating high-rise fire that took place in Bejing in 2009:

“The fire was initiated on the roof by fireworks. The high temperature particles from fireworks landed on the west part of the roof, penetrated the metal panels, and ignited the insulation materials and water proof sheets underneath the panels. The titanium-zinc alloy was reported to be able to melt at about 400 oC. The water proof materials were EPDM rubber sheet and the insulation was Extruded Polystyrene (XPS) foam. Cavities exist between the metal panels and the insulations. The fire started to spread on the roof to the east and west sides. It was reported that, when the fire reached the roof edges, the melting and burning drops of XPS flew down through the facades. The fire then propagated to the lower floors. Fed by high winds, the fire spread quickly and the tower was completely engulfed in flames within less than 20 min.” Source

With a price point  similar to that of EPS or XPS foam, why hasn’t mineral wool in workable board form been used more frequently as a continuous insulation layer? It qualifies for many LEED credits, and offers several critical benefits, especially in fire situation.

Our hypothesis is that certain myths about mineral wool have dogged the material—foremost that it’s not as energy efficient as foam, and second that it’s harder to work with.

Neither is especially true. True, mineral wool has an R-value of about 4.2 per inch, versus EPS foam’s 5-6 per inch. But to achieve an R-10 exterior insulating layer, you simply switch from 2 inches of EPS to 2.5 inches of mineral wool. And you can cut mineral wool sheets with standard tools.

Mineral wool is not without its detractors of course. The product has been criticized because of mining practices used to gather its raw materials. These are legitimate concerns, but we feel that if the industry can mend its mining practices, they still have a product with a much lower embodied footprint than EPS foam, which is made with styrene, a fossil fuel derivative. Foam production may also involve other unwelcome chemicals.

Another criticism has been the use of formaldehyde-based binders in the mineral wool panels. But at least one product, Owens Corning’s ThermaFiber, has solved this problem and offers commercial grade continuous insulation with no formaldehyde.

Beyond the common sense logic of installing a non-combustible cladding to commercial buildings, code changes are coming that put a fine point on the issue. For example, high-rise wood structures received significant support in the 2018 International Building Code. It’s hard to imagine any jurisdiction that would allow flammable rigid foam to be used on these tall structures.