Our planet is heating up, and humans are the cause: 97% of climate research conducted over the past 20 years concurs. So anthropogenic global warming is real. But it’s one of those problems that feels so big that it can paralyze.

After all, the potential effects are biblical in their scale. And the conventional wisdom is that it’s a really hard problem to address, with lots of cultural, political and economic reasons for inaction. But amidst the hand-wringing and hemming-and-hawing a new possibility is beginning to emerge. It may be less painful to reduce greenhouse gas emissions than we thought.

The latest assessment by the Intergovernmental Panel on Climate Change (IPCC), the report that captured 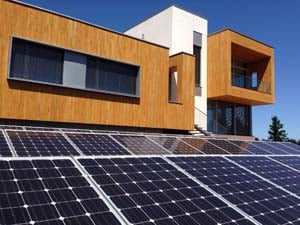 headlines recently for its sobering depiction of the dangers of global warming, estimates that the economic impact of an aggressive ratcheting down of greenhouse gas emissions would actually be quite modest. The IPCC predicted that the effort required to slow emissions enough to keep average global temperature rise to 2 degrees Celsius over pre-industrial levels – a major climate victory – would cost the global economy just 0.06% in economic growth per year.

In his New York Times piece, “Salvation Gets Cheap,” Nobel Prize-winning economist Paul Krugman puts it this way: “even under the most ambitious goals the assessment considers, the estimated reduction in economic growth would basically amount to a rounding error. What’s behind this economic optimism? To a large extent, it reflects a technological revolution many people don’t know about, the incredible recent decline in the cost of renewable energy, solar power in particular.”

I went to Krugman’s source, a report by the US Department of Energy entitled “Revolution Now,” to see the numbers for myself. And they are a bit mind blowing. 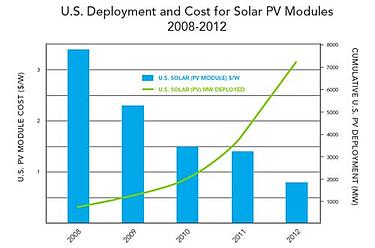 Source: US Department of Energy

Sometime in the next few years, DOE expects that solar power will achieve unsubsidized “cost parity” with coal and gas in the US. That cost parity is a big deal, because as entrenched as fossil fuel interests are, at the end of the day the dollar drives markets.

The coal lobby, for example, will have a tough time shutting down solar for long once it’s the cheaper energy option. According to Evans-Pritchard, the DOE “expects a ‘non-linear’ surge once the key threshold [of cost parity] is reached.” The DOE can be so bullish on the cost of solar in the US because big opportunities for reduction in soft costs remain.

While the hard cost of the photovoltaic (PV) panels themselves will likely decrease only incrementally, the soft costs of solar energy (marketing, supply chain, installation, etc.) are still comparatively high in the US – five times higher, in fact, than they are in Germany. As the solar industry scales up, red tape is removed, and competition drives installation price down, these soft costs are expected to plummet. This solar revolution is joined by other key technological revolutions in all sectors of the economy.

From our perspective at Hammer & Hand, [link to: http://hammerandhand.com] the biggest technological breakthrough in the building sector has been to harness physics as a guide for how we design and construct our buildings. The apotheosis of this, the Passive House approach to building, focuses on creating super-insulated high performance building shells to reduce the energy required to heat and cool buildings to just 10-20% that of conventional buildings. We’ve been extolling the virtues of Passive House for years because, as builders, we think it’s the right way to build: durable, comfortable, healthy, and efficient.

At times we’ve been skeptical of “green” projects that hide sloppy construction and leaky, poor performance behind an array of solar panels. This caution about solar is common among Passive House practitioners. But it shouldn’t make us blind to the solar revolution going on under our noses. What we pooh-poohed as expensive photovoltaic “bling” in 2008 isn’t expensive anymore. And we’re not in some “zero sum” game where we have to choose between conservation (Passive House) and production (solar PV).

In fact, by combining low-load building with onsite solar, homeowners and commercial building owners can move from being consumers of building energy to “prosumers,” selling excess energy back to the grid. Each of us can become an energy investor, benefitting financially from contributing to greener energy, and, in time, building a more distributed and democratic power grid.

As it turns out, it’s not that hard to build a “net positive energy” building. Karuna House, with its 10kw PV array, powers the client’s 3600 SF home and his Tesla, with energy to spare. Or consider a modest Passive House we recently built in Seattle whose PV array will pay for itself in just 6 years. Today both of these projects receive subsidies and incentives to help them “pencil,” but with each passing year we get closer to that cost parity moment when the price of energy will support such investments without subsidy.

Our friend and colleague, Brad Liljequist of the International Living Future Institute argues that we’re already at the point where investments in energy production and efficiency should be considered alongside one’s 401k as an investment that can pay dividends through retirement. We live in exciting times. Big challenges, yes. But also the real potential for transformative change in how we produce and consume energy…and how we build our buildings.

You can read more about the imminent rise of a solar-dependent energy grid in this month's Green Builder magazine Celestia article.

P.S. For an inspiring example of a building that produces more energy than it consumes, check out the Bullitt Center, recognized as “the world’s greenest office building” for its Living Building status, and home to Hammer & Hand’s Seattle office.