Eulogy for Stephen Hawking: The Physicist Who Opened Our Eyes to the Universe

By all accounts, mastermind Stephen Hawking was a marvel of science. Not only did he survive a debilitating illness for decades longer than doctors prognosticated, he uncovered groundbreaking discoveries about the nature of gravity and the very origin of the universe. In his dying days, his final warning to humanity: stop climate change at all costs.

Internationally renowned physicist, author, and Professor Stephen Hawking, undoubtedly one of the most brilliant human beings to ever inhabit this planet, passed away this week at the age of 76.  Reports indicate that he died peacefully, after struggling for decades with amyotrophic lateral sclerosis (ALS), a neuromuscular wasting disease also known as Lou Gehrig’s disease.

While his body wasted away (ultimately, he could only flex one finger and move his eyes), his mind—and his spirit—remained unsullied and insatiable.  Hawking explored the boundaries of time and space, developing a comprehensive understanding of complex topics like quantum theory, subatomic reality, the big bang, and black holes.

His bestselling book, “A Brief History of Time: From the Big Bang to Black Holes”, has sold more than 10 million copies and inspired creative thinkers across the globe to look beyond our precious planet into the infinite universe.

Hawking studied more than just physics.  He took on topics like space travel, religion, and the environment. 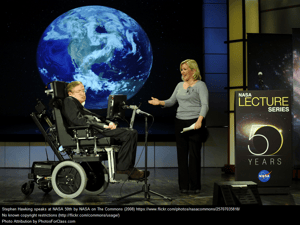 He strongly advocated for space exploration, fervently claiming that it was essential to the long-term survival of the human race.  “Life on Earth is at the ever-increasing risk of being wiped out by a disaster, such as sudden global nuclear war, a genetically engineered virus or other dangers we have not yet thought of,” he asserted.

His scathing views of religion invoked furor from his critics and supporters alike.  Since he could logically explain the origins of the universe, he believed that there was no need to appeal to anything beyond science—namely, God.  He said, “I regard the brain as a computer which will stop working when its components fail. There is no heaven or afterlife for broken-down computers; that is a fairy story for people afraid of the dark.”

While he disregarded religion, he fully embraced life, believing that “we have this one life to appreciate the grand design of the universe, and for that, I am extremely grateful.”

Hawking’s most emphatic warnings to humanity came in recent years with respect to global warming and the increasing direness of our environmental realities.

He clearly articulated that "Climate change is one of the great dangers we face, and it's one we can prevent."  He advocated for quick, substantial, and cohesive action to draw down our carbon emissions, cautioning that the earth could become as hot and uninhabitable as Venus if we do not limit our greenhouse gas emissions—immediately.

“Our Earth is becoming too small for us, global population is increasing at an alarming rate and we are in danger of self-destructing,” he believed.  In fact, he forecasted that we only have approximately 1,000 years left on Earth before conditions that support human life cease to exist.  He contended that we will need to colonize the moon, Mars, other planets if we are to remain a successful (meaning: living) species and survive the impending calamities of climate change.

“We have given our planet the disastrous gift of climate change,” he said.  “When we have reached similar crises there has usually been somewhere else to colonize… But there is no new world, no utopia around the corner.  We are running out of space, and the only places to go to are other worlds.”

He harshly denounced President Trump for abandoning the Paris Agreement, calling it “the most serious, and wrong, decision on climate change this world has seen,” avowing that “Trump's action could push the Earth over the brink, to become like Venus, with a temperature of two hundred and fifty degrees, and raining sulfuric acid.”

He passionately believed that “now, more than at any time in our history, our species needs to work together. We face awesome environmental challenges: climate change, food production, overpopulation, the decimation of other species, epidemic disease, acidification of the oceans.  Together, they are a reminder that we are at the most dangerous moment in the development of humanity. We now have the technology to destroy the planet on which we live, but have not yet developed the ability to escape it.”

He was convinced that humans need to leave Earth, avowing that “spreading out into space” to colonize new planets would unite competitive nations and offer a common goal. “Perhaps in a few hundred years,” he wrote, “we will have established human colonies amid the stars, but right now we only have one planet, and we need to work together to protect it.  To do that, we need to break down, not build up, barriers within and between nations.”

On all accounts, Stephen Hawking’s life was considered a triumph.  Unstoppable, even from a life-altering disease, he constantly pushed the limits, turning his handicap into strength, traveling the globe, achieving his goals, and unearthing some of the most profound discoveries of our time.   When asked why he took so many risks, he said, “I want to show that people need not be limited by physical handicaps as long as they are not disabled in spirit.”

Hawking represented the best of humanity, reminding us to “look up at the stars and not down at your feet.  Try to make sense of what you see and about what makes the universe exist. Be curious. And however difficult life may seem, there is always something you can do, and succeed at. It matters that you don’t just give up.”

Thank you, Stephen Hawking, for your relentless pursuit of the great beyond, your dazzling illumination of our world, and your immortal contributions to our comprehension of the cosmos.  May we all learn from your unabashed determination to constantly improve yourself, and this world.  And may we all be wise enough to heed your advice about our planet, so that future generations can experience this amazing place with the same awe and inspiration that you did.

What do you think was Stephen Hawking’s greatest contribution?  White to me at sara.gutterman@greenbuildermedia.com.